You know you’re living in Alaska when…

…you open the shop door and run right straight into this: 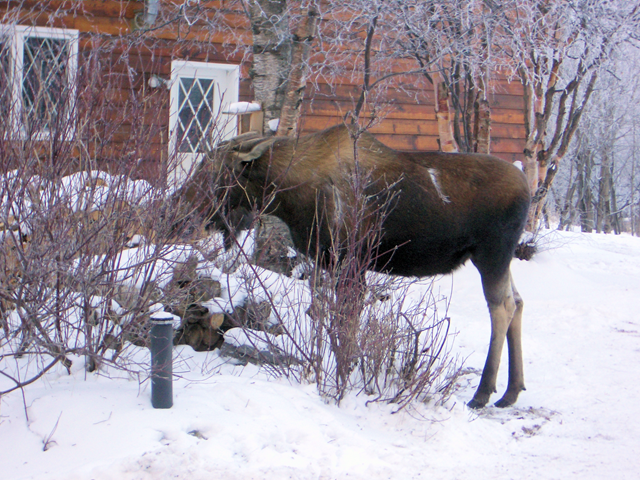 This is one big friggin’ moose, folks.

The picture really doesn’t convey her size.  She’s a good seven feet tall at the shoulder and probably well over 900lbs – she’s also pregnant.  She’s about fifty feet away in the picture, which is just fine by me.  Her yearling calf is behind her out of frame.  Really, you don’t want to end up between a cow and calf, especially a pregnant cow and calf.

Trust me on this.

I should have been paying attention, I knew they were around.  Becky and I watched her and the calf last night from the sunroom balcony.  And their prints were all over this morning.

I must be losing my edge, getting old or something. Sheesh.

I opened the shop door and the calf was standing immediately outside.  Seriously, I was looking straight into his eyes from about two feet away.  I about jumped out of my skin.  He’s not exactly small either, probably four or five hundred pounds.  He snorted and pawed the ground and then stepped to one side, and that’s when I realized mom was about two feet behind him and none to pleased – ruff full erect and ears flat on her head. Snorting.

I’ve got a freezer full of one of their cousins and I started to think maybe they were here for revenge.

“Stand aside, Junior, while I get out the whoop ass.”

“Awwww, Mom, you never let me have any fun.”

I carefully shut the shop door.  Moose are visceral creatures, shut the door and you effectively drop right out of their conscience.

I could hear them snorting outside for a minute, then they ambled off.  It’s about –11F right now and the snow makes this weird squeaking noise when you step on it. I could hear them walking away.  I grabbed the camera and the shotgun (just in case) and opened the shop door again.

I got the one picture, before they decided they didn’t like me and suddenly galloped off around the shop and into the woods.

Yeah, so how’s your morning starting out?