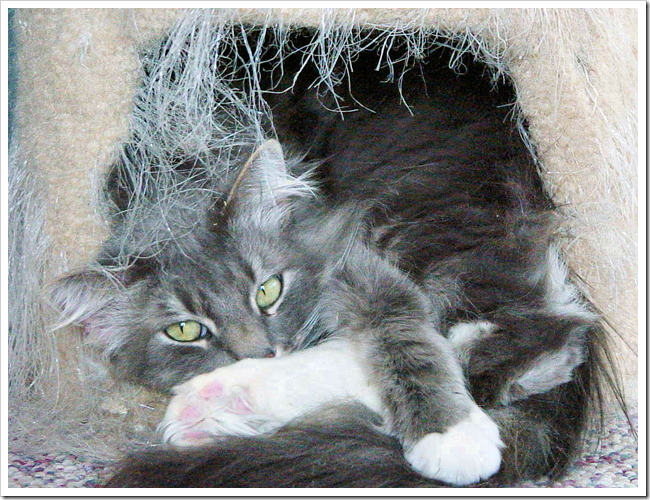 I’m tired, irritated, and I have a headache.

I did not get enough weekend, I need more. Weekends irritate me, they need to be longer. We need an extra day in there, Caturday, LazyBastardday, SitinfrontoftheTVinmyPJsandwatchrerunsday, something. How about Gibbonday? Named for Ron Livingston’s character in Office Space, the guy that got hypnotized into just not giving a damn and then spent the entire weekend in bed, sleeping. Maybe it doesn’t even need a name, maybe it should just be an empty, ambitionless period in between Saturday and Sunday – made up from all the life-robbing hours wasted during the week. Those two hours you wasted standing in line behind morons, plus another two or three hours you wasted waiting for the light to turn green, plus the hours you spent on the phone pretending to be interested in whatever the blathering idiot on the other end was talking about, plus the time spent waiting for the printer to warm up, plus the time you spent surfing websites that promised content but didn’t deliver, plus time shooting the Jehovah’s witnesses and grinding up their bodies and waiting for the resulting slop to render down in large vats of sulfuric acid, plus the time you spent trying to open a new squeeze bottle of ketchup that is wrapped and secured and sealed better than the secret government archives at Area-51, plus time spent deleting spam, plus time on the exercise bike and elliptical machine and having to endure the endless pabulum spewing from enthusiastic skinny people with 2% body fat and a jock-sweat high who just can’t help telling you how good exercise feels – all that time should add up to an extra couple of days on the weekend. Think of it like a tax rebate. You don’t get a free day, you just get back a bit of your own time other people waste during the week.

Yes, yes, fine. you may call it JimWrightDay if you must.

Now, on to the things that irritate me this week:

- StumbleUpon: If you’re not familiar with this, StumbleUpon (SU) is an add-on for the Firefox Internet Browser. It’s sort of a social networking site, but SU’s real utility is supposed to be in guiding you to interesting and useful internet locations. How it’s supposed to work is that people find an interesting site, they flag it in the SU database, leave a brief description, and assign it to a category. When you click the Stumble button on your Firefox SU Bar, SU supposedly takes you to random sites according to your registered interests. You can then give the site a thumbs up or thumbs down rating. I’ve used SU since the first day it was created – and at first it took me to many new and different places, many of which I still visit regularly. Then, just as with everything else, the drooling idiots arrived like a tribe of retarded baboons and started madly flagging the entire Internet. Then the marketing goons arrived and started flagging their own ads. Then the 4-chan crowd showed up and started deliberately mis-categorizing sites. Then the self-serving assholes showed up and started flagging their own sites – and these people really piss me off, because they inevitably add a comment to the top of their sites, “Welcome Stumblers! If you like my site, give me a thumbs up!” Fuck you, any site with that kind of self serving crap automatically gets a down-check from me. What I’d really like is a button you can click to give them a swift kick in right in the balls. Oops sorry, Buddy, I stumbled…

- Pilferers: No, not thieves, pilferers. People who would get all self-righteous and offended if you accused them of out and out theft. Those people who justify their theft with self rationalization. It’s not stealing, it’s just one little thing, it only costs a few pennies, the store doesn’t even notice! Yeah, but I notice, and it pisses me off. Next time you’re at Lowes or Home Depot, look in the specialty hardware drawers. You know, those little packages of nuts and bolts. It took me an hour the other day to find one package of 10/24 metric threaded nuts. They come in packages of five, except every single package had been ripped open and one or two nuts removed. For fuck’s sake, the damn things only cost twenty-five cents a piece you stupid bastards. You’ve got enough money for cigarettes and booze and that chrome-plated hubcap-spinning nine mile a gallon monstrosity out in the parking lot, take the whole package and pay for it.

- Book Stores: Goddamn it, do I hate modern book stores. Remember the old days when book stores were little hole in the wall places that smelled of old paper and binding glue? They usually had wooden floors that creaked and groaned under the load of books. And only geeks worked there, the employees were hairy legged women and bearded unwashed guys, sitting behind the counter reading comic books. And only geeks shopped there because nobody but geeks read. It was quiet in a book store, you could spend hours in front of the stacks and never be bothered. Remember that? Now, now bookstores are huge soulless glass boxes. Every damned one of them has a coffee shop, which means the store is full of mouth breathers busy slurping and smacking their lips and stirring and dripping and leaving those goddamned paper cups on every shelf and talking, loudly, on cell phones. I’d like to bash these people in the head with a Webster’s Unabridged Dictionary and bury them under a stack of new-age self-help books. Then there are those tables, up front, the ones with the latest vitriolic fly-speckled vomitus from Rush or Ann or some other rightwing nutjob. You leave garbage like that laying around and sooner or later the cockroaches will show up – ten years ago you couldn’t get a neocon into a bookstore, unless it was for a book burning – now, there they are, all pinch faced and gassy and asking where the American books are, you know, the bible section. And then there’s the kiddie section – here’s the problem, if you have a kiddie section, people bring kids. I know, I know, what the hell were they thinking? It’s a bookstore, not a Chuckie Cheese’s. Kids are loud. Kids don’t stay in the kiddie section, instead they roam the stacks following their parents and complaining in loud shrill voice. I fucking hate kids in bookstores. And that goes double for that squalling crib ape in the stroller. I swear to God, take that howling curtain climber out to the car and wipe its ass or plug a bottle into it or sell it street people, I don’t care – but for the love of all that is holy please make it be quiet. Then there’s the music section – whose dumb-assed idea was this? See, if you have a music section, then inevitably somebody is going to come up with the idea that the store should play music selections over the speaker system. Here’s the thing: people who work in book stores have shitty taste in music, and they inevitably play that shitty music in the store. I don’t want to listen to your shitty techno new age music while I’m looking at books. And then finally, there’s the geeks – the ones that used to buy a stack of comics, excuse me graphic novels, and go home and read them in the basement. Now they just plop their emo asses down on the floor in the middle of the aisle and surround themselves with a stack of magazines, excuse me graphic novels. They pop on a pair of headphones and slurp away at giant frozen frappachinos and just start reading and giggling and jiggling and wiggling oblivious to the fact that I’m trying to get past. Where the hell else is this kind of shit permitted? Do these people go into a grocery and flop down in the frozen food section and have a picnic? Can you bring your jammies and have a sleepover at the mattress store? Is it OK to fire off a few rounds in the gun shop? or get shitfaced in the Brown Jug? So what the hell is the deal with book stores? I just want to kick these people and keep kicking them until they learn a few basic social skills.

I’m tired and cranky and I’ve got things to do and it’s Monday all over the place. Hopefully your day is going better than mine.

And if not, well, tell me about it. Feel free to vent, I’ll listen.

No really, I will.

But I’m going to need a receipt, because I’ll be claiming that time back this weekend.

Other things that chap my ass can be found here.