He drove up the Alaska Highway in his RV and brought along a pile of hardwoods and turning blanks that he had scrounged from various places across the country. Last summer he turned a few of those blanks, and I turned a few. And we incorporated some into other things. But we worked mostly in Alaskan Birch and so some of Beastly’s stock sat untouched in the wood rack.

Cherry is highly prized by woodworkers. Straight grained and dense, it makes beautiful furniture. When you’re working with it, it makes the whole shop smell like cherry pipe tobacco - without the burning tobacco under current. But it’s difficult to work with, it burns easily, it doesn’t take certain finishes well – finishes tend to come out blotchy if you don’t use special preparation and sealers – and it tends to splinter and chip out if you’re not very careful.

So, somehow neither Beastly or I got around to turning that big burl. We’d pick it up. Look at it. Feel the weight. And put it back on the shelf. I’d say to Beastly, “You should turn that.” And he’d reply, “No. I brought that up here for you to turn.” And I’d reply, “Maybe next time.”

At the end of the summer, he left for warmer climes and that cherry burl remained unturned.

Last week however, it was cold and wet and windy out – and I was out of prepared birch blanks in the shop. Going out in the weather with the chainsaw to cut more did not appeal to me.

So I finally turned that cherry burl.

Turning a unbalanced and irregular burl with dense heavy bark is a really good way to either bash yourself silly or cut the hell out of your hands. The smart thing to do would be to cut the burl into a balanced round blank on the bandsaw prior to mounting on the lather. This also did not appeal to me – the burl’s irregular, vaguely oval, shape and gnarly bark were part of what made it so interesting. So I mounted it on a large cast iron turning plate and turned it the way it was. Very, very carefully.

I used only the large Sorby bowl scraper, and stopped regularly to touch up the scraper’s edge. With wood like this you want the absolute sharpest tools at all times.

Some turners, like Beastly, go into a project knowing exactly what they want in the final piece. Not me. I usually have no idea what the final piece will look like and in this case as the piece began to emerge from the wood, I settled on a shallow concave shape with a natural oval rim.

When finished, the bowl contained deep bark lines and a partial under-bark rim. Looking at that, and the wood’s natural pink cherry tint, I decided to enhance those areas using a technique I’ve been developing for a year or so now. I won’t tell you how I do it, but the natural recesses were filled with red and gold flake, mixed with a wooden and crystal filler I created, and left to dry. The final effect is created via layering and takes several days. When complete, the effect very closely resembles the interior crystalline structure of a cut geode and it appears that the wooden burl has literally grown around an interior metallic jewel.

I’m quite happy with it. And the pictures don’t really do it justice. In strong sunlight it is simply amazing. 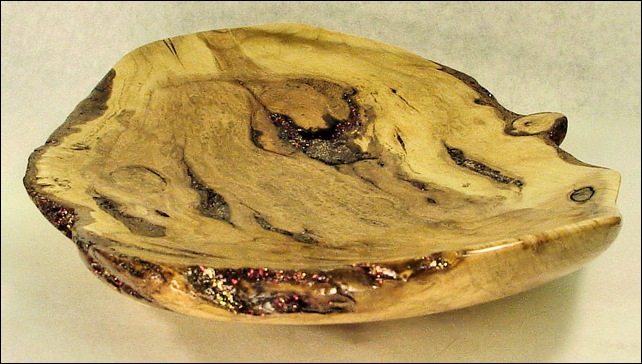 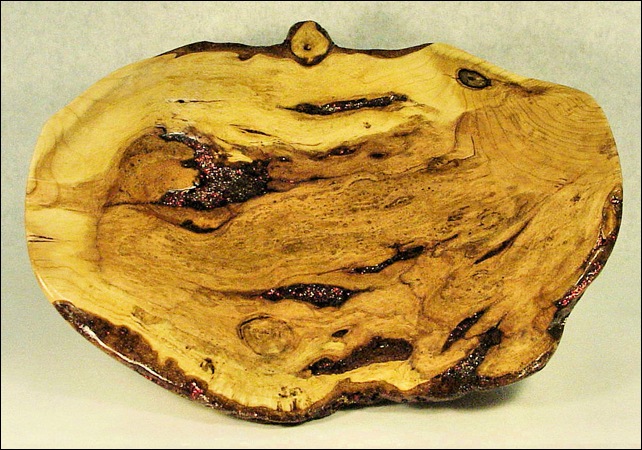 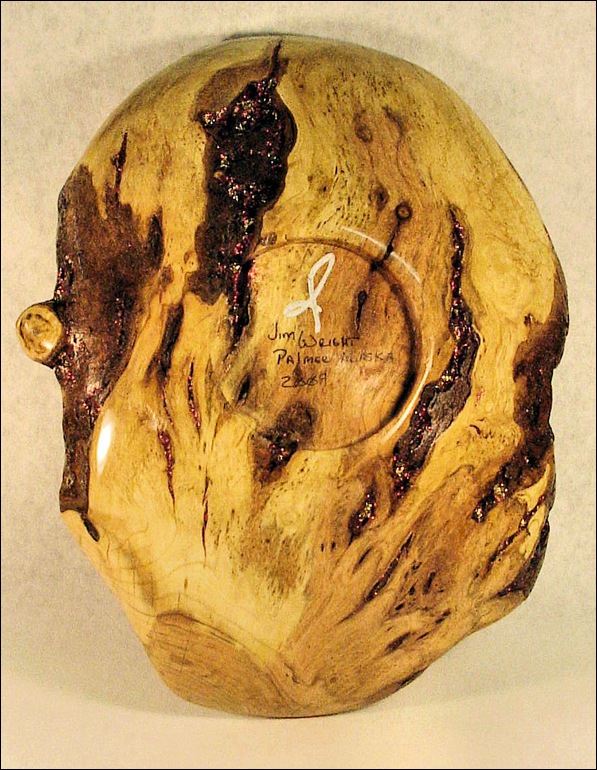 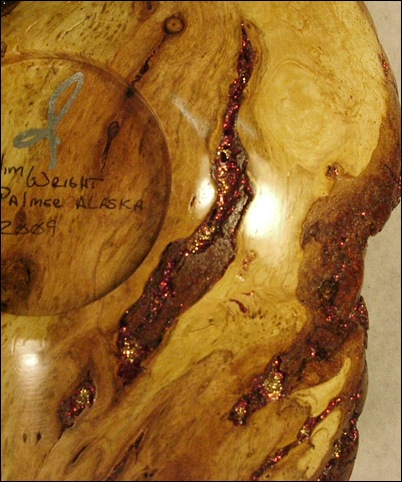 This a large heavy piece. Finished in simple Tung oil and burnished.

The chips and saw dust from this project went into my fireplace and are making the house smell wonderful.