Pictures from the Past Meme

My friends are posting pictures from their past as sort of an internet meme. The original post was by Jeri at Smug Puppies, followed by Janiece at Hot Chicks and Smart Men and Michelle at Random (but not really). It looked like fun.

Last year I spent a couple of months (or longer) restoring a bunch of my mom’s old pictures. It was a hell of a lot of work, but the end results were definitely worth it and let us preserve some family history that otherwise would have been lost.

Some of mom’s pictures were taken from fifty year old negatives that had decayed pretty badly. Others were from thirty to forty year old slide film that had also degraded. Both the kodachrome and Ektachrome slides had red shifted severely. All were scratched. Some had thirty year old fingerprints, which had destroyed the fixative. And all were smoke damaged from a fire at my parents house several years ago.

Each negative or slide had to be scanned into the computer. I used an HP scanjet with an attached Transparent Materials Adapter running at 1200x1200DPI. Since the TMA is not an autofeed model, each slide or negative had to be loaded individually, scanned, and then changed to the next one. There were a lot of slides. Mom did most of the scanning during a Christmas visit to Alaska a couple of years ago.

I then had to push each image through Corel Photo Paint X2 and correct for the redshift, fading, scratches, and whatever other damage existed. It was a long and painstaking process, but Corel Photopaint has a number of tools that make it much easier and can automate some of the process. As I said above the end result was worth the effort.

Here’s an example of the process:

This is a picture of my dad, circa 1961. He’s raking grass seed in front of his then new Corvair. This was right after my folks got married, and they lived in a trailer park in Grandville, Michigan. 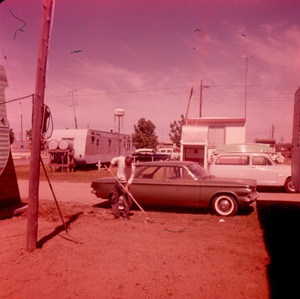 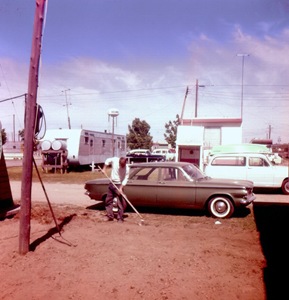 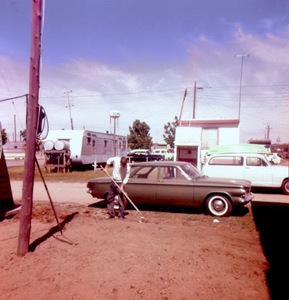 The leftmost picture is cropped from the original scan, which was from a damaged negative. Over the years the fixative had faded and oxygen exposure caused the color balance to shift to the red when the picture was converted to a positive. This picture was taken with very early 1960’s film on a Brownie box camera with a fixed focus lens, as a result the original print colors were not true to life and there is some chromatic aberration and focal distortion due to the lens system. The negative was scratched and dirty from the house fire. I used the X2’s fade correction filters, then manually adjusted the color balance using color cards compared to the original colors of that Corvair and the sky. Then I used a combination of tools to remove the scratches and dust. And finally I used a warping tool to correct for the focal distortion. This picture wasn’t damaged nearly as bad as some, which were almost – but not quite - unrecoverable.

Anyway, since I have them online and Jeri, Michelle, and Janiece have posted pictures, I thought I’d share a few with you.

As a Sailor, you can see that I had an affinity for water from a very early age, also I look good in a swim suit and brush cut: 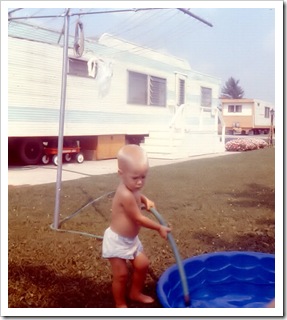 When my brother Mike came along, my folks bought a house on Cottonwood Drive, in Jenison. It was a tiny little place, with an enormous yard. See that garage? My dad moved that entire building from down by the road all the way up there next to the house. Also, I want to say that Mike’s little coverall jumper outfit and that fuzzy hair are making me laugh my ass off at the moment – if you knew Mike, you’d laugh too. 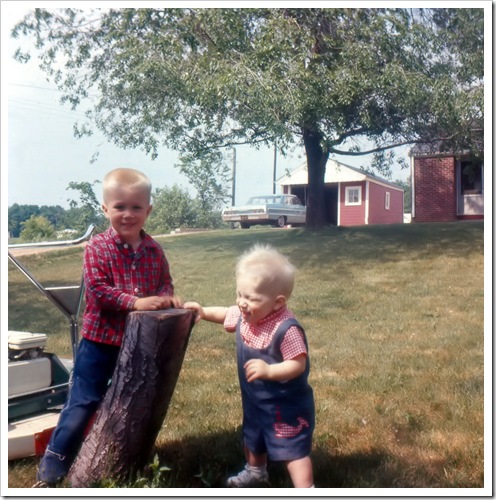 Here’s the Wright boys, Dad, Mike, and me (in the blue shirt) – this picture was taken seconds before we were engulfed by the Great Michigan Tsunami of ‘68, which you can see roaring down on us from behind. Thanks for the warning, Mom. What? Oh, sorry, my mistake, that’s Tahquamenon Falls in Central Lower Peninsula Michigan, which we visited during one of our many, many Michigan camping trips. 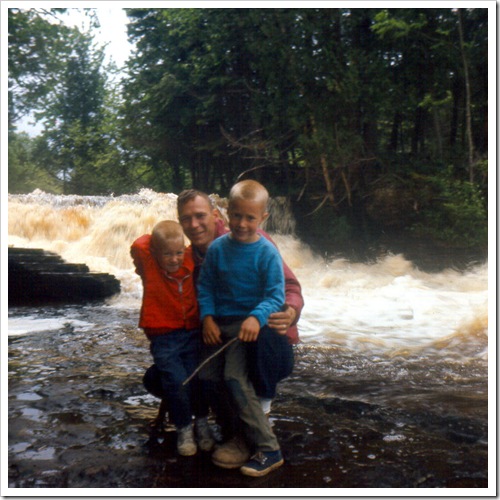 Note: My mom is not in a lot of my childhood pictures, because when she was it meant dad was holding the camera – which meant most of those pictures turned out like this: 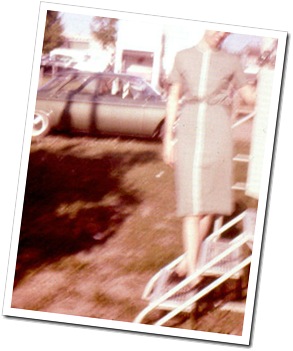 Even photoshop can’t do much with those. Dad had serious skills (he moved a whole damned garage right?), but running the camera wasn’t one of them.

Eventually we outgrew the house on Cottonwood and moved to new place on Rosewood – which is where I lived until I graduated from high school. You know, a lot of people my age wax nostalgic for the 70’s and their lost youth – me? Not so much. One look at my dad’s sport coat and I’m good with leaving the 70’s far, far behind. 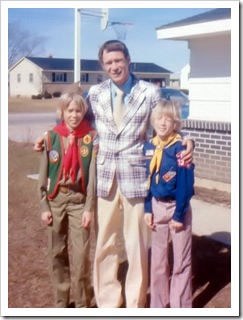 Well, there you have it. That’s it for today. I’ll see if I can dig up a few pictures from my early Navy days for your amusement.

Now, if you’ll excuse me, I have errands to run.