Mind If I Play Through?

I made a joke.

It was in bad taste.

But then, nowadays? What's good taste?

I wouldn't want that to happen to anyone. I mean, I don't have much use for rich socialites, but I certainly didn't wish her ill. She was once married to Donald Trump after all and her kids are... well, let's just say she probably suffered enough.

Because Donald Trump had her buried on his golf course.

Donald Trump buried his ex-wife on his golf course.

Donald Trump had the woman who divorced him for "cruel and inhuman treatment," the woman Trump had to pay $14 million to and hand over his mansion in Greenwich, that woman, buried on first hole of his golf course in New Jersey.

Given Trump's record of grift and revenge combined with naked greed, he likely did it because under New Jersey law, designating Trump National Golf Course as a cemetery -- even if there's only one grave on the whole vast estate (and there is, only one grave) -- means that the property is now exempt from both taxes and sale or seizure for collection of judgements against the company that owns it, i.e. Donald Trump.

I mean, goddamn, that's the punchline to a at least a dozen late-night monologues. 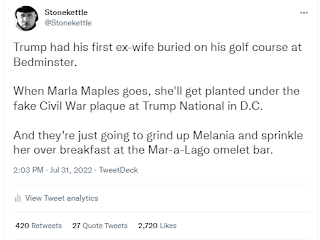 You bet. And why the hell not?

Don't speak ill of the dead? Depends on the dead. Why do I owe these horrible people any respect whatsoever, living or dead? The Trump family, her own goddamn kids, had her buried on a fucking golf course owned her ex-husband for a tax break. I'm not sure where my wisecrack ranks, disrespect-wise, compared to that, but I'm not going to lose any sleep worrying about it.

Well, you know me. Sometimes I make comments that are bait.

And once the waters of Twitter were chummed, well, it didn't take long for the outraged bottom-feeders to start circling 'round. 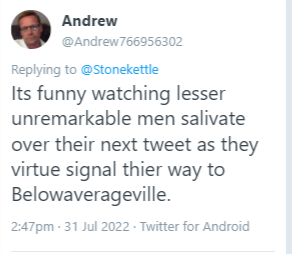 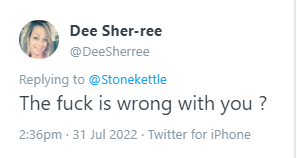 Suggesting they turn Melania into omelet topping was wrong.

Given the amount of silicon involved, the responsible woke thing would have been to recommend plastics recycling. 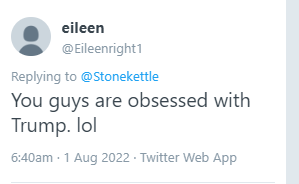 Yeah, I'm the one with the giant Trump signs in my yard and plastered all over the back of my car.

Next to those Confederate flags. You know, a nation of slaver seditionists who only lasted four years and have been defunct for a century and a half now?

I could go on, and if you're really interested in every response, you can peruse my Twitter feed for yourself. No, It was this guy, Jeff, angry old white man with his technology impaired off-center, up-the-nose laptop selfie, who I was waiting for.

And he didn't disappoint. 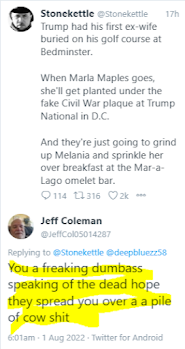 I hope they spread you over a pile of cow shit, he says.

Fair enough, I suppose. The roses will look good.

Me? I hope my readers have me stuffed and set on a concrete pedestal in front of your house, giving you the finger for all of eternity. Every time you look out your window, every time you mow your grass,  every time the priest comes over for dinner, there'll I'll be. Up yours, Jeff!

Hell, for that matter, I'd be thrilled if you put my petrified carcass right next to Ivana on the sixteenth green and Trump can kiss my bronzed ass every damn day.

Make him earn that tax break.

That said, what's your problem?

What are you mad about?

You, you Trump voters? You Republicans? Isn't this what you wanted?

Isn't this exactly the world you want?

That's the guy you love, the guy you follow, the ideology you embrace. That's what you voted for, isn't it?

This is you, right? 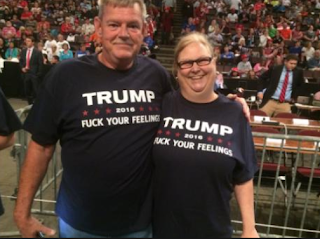 This is you, right here. Fuck your feelings, Snowflake!

Sure it is. I mean, you laughed when Trump flopped around on stage, flapping his arms, making weird noises, awwww, ooohhh, laaaaaaaa, mocking a disabled reporter. 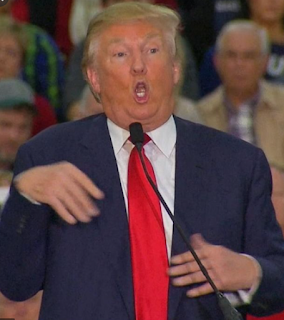 That shit was fucking funnee, wasn't it? Sure, it still is, to you.

That's the MAGA world you wanted, wasn't it, Pussy?

Pussy, cuck, snowflake, soyboy, that's what you call people, don't you? I mean, you sure as hell don't use those terms out of respect, do you?

You hate the fucking elites with their effete manners and emasculated decorum.

That's why you proudly call yourself politically incorrect.

You're Unwoke. Grab 'em by the pussy and hold on! You're a 60-year-old man, but you're finally one of the cool kids. It's funny to own the libs, isn't it? Ha ha, grow a thicker skin, Beta! 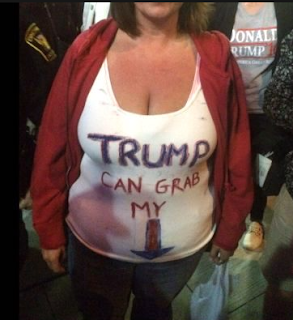 You're furious, every day. Aren't you? You're mad about everything, Black Lives, teachers, kneeling, masks, Antifas, Trans people, you got a whole damn list. Your pronouns are "fuck off" and "AR-15" and you're not on social media to make any friends and you're not afraid to let everyone know it.

Because you got no respect for anyone whose identity doesn't conform to your idea of how America should be.

You're so not woke you're damn near in a coma! And you're proud of it. 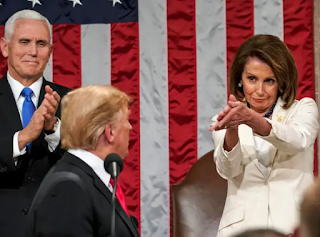 When Cottoncandyhair McBonespurs called veterans like me "suckers and losers," where was your outrage?

No, to you that was just Trump saying it like it is.

That's what you love about him, don't you? That he says what you think, how you think word for word, and he's not afraid to say it out loud.

You cheered when Joe Wilson shouted "YOU LIE!" at President Obama in the middle of a State of the Union speech. Oh, you did, don't deny it. You still think that was great and you want more of it. Keep calling 'em out, Joe! 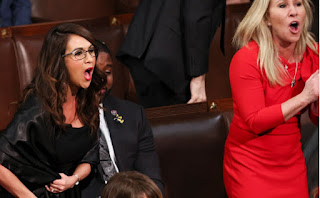 This, right here, this is the ugly, mean, gun-toting, crass, ignorant, jeering face of your ideology.

This is who you are and you're damn proud of it.

You're finally one of the cool kids, finally part of the in-crowd, you're one of the bullies now and man it feels good. This is who you've always wanted to be. As far back as you can remember. Isn't it? Yeah. Remember how you laughed when Rush Limbaugh called Michele Obama a "Silver Backed Gorilla?"

I do. I remember.

No outraged protest from you then, was there? 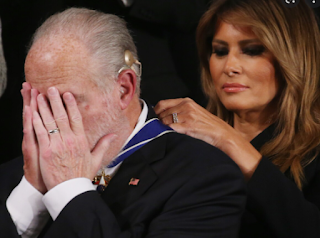 No, you loved every insult. Every jape. The hate made you feel special, better, superior. Every time Rush, or Glenn Beck, Anne Coulter, Alex Jones, et al, called a woman a slut or made a gay joke or was a racist. Funny shit, man. Funny shit. And so true, right? Yeah, they ought to give Rush a medal...

My disrespect? My insensitivity? My glee at your loss and tragedy? That's the world you asked for.

That's everything you ever wanted.

And that is your crass sophomoric hateful ignorant bully of a president. That's everything you ever loved about him.

That is the world you wanted.

You're one of them now, just like you always wanted to be.