Outside of Culpeper, Virginia, is a monument to the madness of the cold war.

It’s a 140,000 square foot facility buried in the side of Mount Pony, about an hour south of Washington D.C.

It was built in the late 1960’s and deemed officially operational on 10 December, 1969. This isn’t one of those places blasted from solid granite bedrock, miles below the surface, designed to safeguard the remnants of America’s military and political elite in the event of all out nuclear war. It’s not a bomb shelter per se and wouldn’t have survived a direct hit by nuclear weapons. Rather Mount Pony is a radiation “hardened” facility – basically a big damned concrete and steel building, buried under several yards of dirt. Lead lined shutters could be dropped over vents and such few windows as existed in the partially buried facility. Huge reinforced vault doors were designed to close the facility off from the outside world. Air filters, power generators, and boxes of canned food would preserve up to 540 selected government employees for up to 30 days against anything short of a direct nuclear strike. 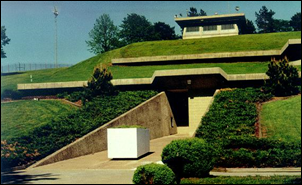 Most of the lucky 540 people inside would be from the Department of the Treasury.

You read that right.

See, Mount Pony was designed as a Continuity of Government facility. The place was operated by the Federal Reserve Bank of Richmond and up until recently housed seven large computer systems which were the central node for all US electronic fund transfers.

And until 1992, the bunker also stored anywhere from one to three billion dollars.

We’ll come back to that in a minute.

In the mid 90’s, with the Cold War and the threat of imminent nuclear Armageddon a fading memory, Congress decided to phase out the facility’s CoG function. Mount Pony cost millions to build, and it was still an enormous, robust, and useful facility however, so in 1997 it was designated part of the National Archives and placed under control of the Library of Congress. The bunker was refurbished and last year opened as the National Audio-Visual Conservation Center. It holds more than 6 million items from the media and entertainment industry: files, audio recordings, television shows, pictures, posters, screenplays, musical scores, records and notes, tapes, and fiches. Everything from the original 1957 Carnegie Hall concert by Thelonius Monk and Johnny Coltrane to one of the very first motion pictures ever made, The Great Train Robbery by Thomas Edison himself.

New facilities have been built aboveground to house preservation labs and support facilities. The Library of Congress is in the process of digitizing as much of the archive as possible – and a lot of it is already available to researchers and the public via remote access at the James Madison building in down town Washington D.C.

I think it’s great that this cold war relic has found new life preserving the art and history of the United States. I think it’s great that it was never used for its original purpose – no really, I know nuclear war sounds fun, but really I’d rather take a pass on it. Call me crazy. And I think - unlike all those missile silos moldering out west or all those bombers gone to the scrap yards or all those holes in the ground that we’ve poured so much money and effort into - it’s great that the people who paid for this particular concrete monstrosity, i.e. the American taxpayer, get something out of it (or in this case put something into it).

But here’s what really caught my eye:

This place was built to store money. Three billion in bills and coin - though there was rarely more than one billion there at any one time. That fortune was supposed to help restart the economy following a nuclear holocaust.

Try to picture that, would you?

Nuclear war. Cities in ruin and uninhabitable for decades, if not longer. Industry shattered and infrastructure vaporized. Megatons of radioactive fallout settling across the grain belt. The four horsemen afoot upon the land. Death, famine, pestilence, plague, fire, and flood. Devastation that would make Dresden and Nagasaki pale in comparison.

And the Fed figured that three billion would be enough to get the economy moving again, and start rebuilding the country.

Well, to be fair, three billion in 1969 dollars - which adjusted for inflation would be about 16.7 billion today. And to be completely fair, Mount Pony was just one of several facilities hidden around the country. So figure the Fed stashed away a bit more – let’s be generous and say that today those funds would be worth 100 billion dollars.

100 billion. The best minds in the country during the Cold War figured they needed 100 billion to restart the economy following nuclear war. And who am I to argue with them?

What’s value of the stimulus package? Well the first one, the one signed by George Bush was 700 Billion dollars. The one President Obama is signing today is worth over 787 billon.

Either those Cold Warriors were seriously off in their calculations, or somebody is seriously off regarding the depth of this fiscal crisis.

Enjoy your President’s day, folks – if you need me, I’ll be in the basement, stocking my bunker.

Email ThisBlogThis!Share to TwitterShare to FacebookShare to Pinterest
Labels: Things I'm thinking about