Just got back from Anchorage and lunch with Tania.

She lied in that previous post - as it turns out, she's every bit as cool in person as she is online and on the phone. She made me laugh several times and I thoroughly enjoyed myself. My wife, Becky, was able to join us for a couple of minutes, despite being in the middle of a hectic day - so, like Tania said, bonus.

It's funny talking to her, it was like meeting an old friend. We've all spoken online so much that there really wasn't any surprises. Tania was exactly as I expected her to be, and I'd have recognized her across the parking lot, if she hadn't seen me first.

Tania had get back to her business meeting, and I had to get home to pick up my son from school, and the hour went by way too fast. As we were walking out, we wanted to get at least one picture to prove to you all that we had actually met - and in front of the Moose's Tooth were a couple of Minnesota State Hockey players, drinking beer and waiting for a table. We got one of them to take this picture. 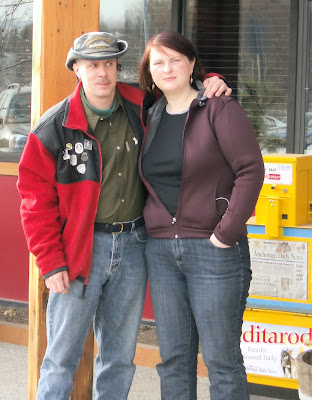 One thing you might note, Tania's tall (okay, I'm not particularly tall my self, but still...). Also she'd said something funny right at the moment the Hockey guy snapped the shot, which I think makes a cool picture.


We'll get together again, next time Tania's in town - and hopefully we'll have a little more time together.

Thanks for a great time, Tania, good to finally meet you in person.
Posted by Jim Wright at 6:31 PM

Email ThisBlogThis!Share to TwitterShare to FacebookShare to Pinterest
Labels: things I do with cool people I meet online