For the second time in as many days, I'm headed into Anchorage.

Last night my wife and I attended the Wells Fargo Iditarod banquet at the Sullivan Arena. It was terrific. Our favorite Iditarod mushers, Aliy Zirkle and her husband Allen Moore (who recently won the Cooper Basin 300, go Allen), were gracious enough to sit at our table. Both are funny, wonderful people. They own and operate the Skunk Place Kennel in Two Rivers, Alaska. Last year my wife, Becky, was lucky enough to win a spot as an Iditorider, i.e. she got to ride in the ceremonial start, about twenty miles from downtown Anchorage out to the Campbell Airstrip. She rode in Allen's sled and had a great time. The day before the Ceremonial Start, Aliy and Allen took my son and I for a sled dog ride around Campbell Airstrip. Think about that for a minute, the very next these two were about to embark on a epic dog sled race 1100 miles from Anchorage to Nome - and they took time out of their training schedule to give an eleven year old kid and his drooling fanboy father an hour long ride with their championship teams. Yeah, did I mention they are incredibly nice people?

Here's Becky, sitting in the sled in downtown Anchorage at the start of the 2007 race, that's my son standing next to her. Allen Moore is on the left in the musher bib, and that's Aliy's father standing on the sled brake to keep the team in place until the proper time (there's about twenty excited dogs hooked up, and they are like a souped 4x4 - talk about traction and pulling power!) 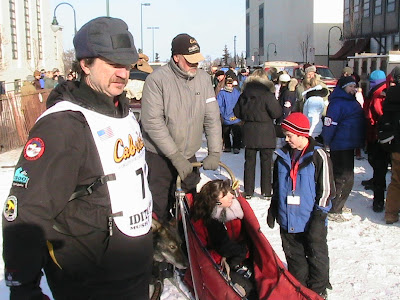 This year's race start is tomorrow, we'll be out there cheering them on. And Sunday is the restart (the real start of the race, on Nancy Lake about 40 miles north of my house here in Palmer). We'll be there too. Expect pictures.


Anyway, I'm headed back into Anchorage this morning to meet regular commenter Tania for lunch at the Moose's Tooth. I'm looking forward to it. Expect pictures (With Tania's permission, of course).