Hell of a morning

Well, OK, it's not all that amazing I suppose, he's 81, he hasn't be seen in public in 19 months, he's sick and feeble. But, still, he's been in power for 49 years, he's an institution on the world stage. I always figured he'd die in office, somehow I could never see the old guerrilla resigning.

My dad was stationed in Cuba in the mid 50's, and according to him actually met Castro and his brother Raul, in the period sometime after the disastrous Moncada Barracks attack and before the beginning of the 26th of July Movement. Here's a shot of my dad from around that time, circa 1954 or so. My dad would have been about 18 or so, and he's standing in front of the EM Club on Guantanamo Naval Base. What a punk. 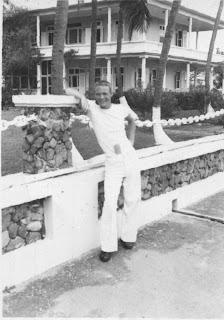 Anyway, I admit to harboring a sneaking admiration for Castro. Oh, stop it. I don't admire his politics or the crimes he committed against his own people, or all the subversive Marxist crap he instigated in Latin America - or the fact that he always looked like he needed a hot shower. In fact, there's a hell of a lot of things about him I don't admire. Still, here's a guy who has managed to be a thorn in the side of every US President since Eisenhower, despite everything those powerful men could throw at him. Ten US Presidents now have been confounded by this tinpot dictator from some dinky island banana republic. They tried everything to get rid of him, from poisoned cigars to invasion to embargo to sactions - nothing worked, Castro shrugged off the CIA and everybody else. Ten Presidents have had to put up with the results of Eisenhower's idiotic foreign policy and his decision to back the Batista coup in order to keep the sugar and the profits flowing. It has always amused me, because instead of learning from that lesson, every single one of the last nine Presidents has gone on to make nearly the same mistake - in fact, Cuba could be considered a template for our foreign policy in the third world, i.e. back the corrupt dictator until he either turns on us, or is overthrown by a regime that is, for some strange reason, utterly hostile to us, we'll call that 'promoting democracy.' And it's worked like a charm in Cuba, Vietnam, Panama, El Salvador, Iran, Iraq, Afghanistan, and yeah, etc and etc.

I've always thought that Castro was like one of those Voodoo dolls that are so popular in his part of the world. As long as he's in power, we're stuck making the same mistakes over and over.

Maybe now that he's gone the curse will be broken.

Probably not, I expect he'll be laughing at us from beyond the grave, but I can hope. Right?


-------------------
Speaking of dictators:
- Musharraf (a 'Key Ally' in the War on Terror) conceded Pakistan's elections this morning. We'll see if he actually gives up power, and if he doesn't - well, one guess as to what our reaction will be, I mean he's a key ally and all.
- The US Supreme Court (also a 'Key Ally' in the War on Terror) conceded it's power this morning by refusing to hear an ACLU suit against warrantless wiretapping. In your basic catch-22, the court said unless the ACLU could prove the wiretapping, the court wouldn't hear the case. The proof is, of course, classified. So, unless NSA or the phone companies decide to incriminate themselves - no case. Yeah, way to go there, SCOTUS, way to go. Well, look at it this way, the whole concept of 'Checks and Balances' will be a lot easier to teach in the schools:

Teacher, "Who can explain the role of the Supreme Court in the US Government?"
Little George, "Uh, it's a joke?"
Teacher, "Very good, Little George."
Posted by Jim Wright at 9:36 AM