Just another day in Anchorage

I mentioned yesterday, we spent a gloriously sunny Sunday afternoon in Anchorage at the Fur Rendezvous.

For those of you from more mundane places, the Fur Rendezvous - or Fur Rondy, or more often just 'the Rondy' - is a two week long winter festival held annually in downtown Anchorage in one form or another since about 1935 (except for during WWII. Portions of the Alaskan territory had been invaded and Anchorage was an Army camp on the edge of the Pacific theater then, and a damned serious place). For us, it signals the end of the long dark winter months and the coming Break-up (we don't have 'spring' here, the foul brown and muddy period between Winter [yes, with a capital 'W'] and summer is called Break-up. Yep, you just learned something).

The term 'Fur Rendezvous' comes from the old semi-annual gatherings where trappers would come to the ice-free anchorage on Cook Inlet in order to sell their winter fur harvest, buy supplies, drink, socialize (read that as fight, weapons optional), get one of their twice annual hot baths, see a show, and maybe get down and do the wild thing with some of the local ladies. Nowadays, there's still a lot of socializing and drinking, a bit of fur trading and selling, and rumor has it that more than a few are still getting down with the wild thing. There's a carnival, and good food, and snow and ice sculpting contests, dog sledding, and reindeer in the streets. All of which leads to the biggest annual event in Alaska, the Iditarod Sled Dog Race - 1100 miles from Anchorage to Nome through some of the roughest territory on the planet. It's one of my favorite times of the year, here in Alaska - and if the crowds are any indication, it's pretty damned popular with everybody else too.

As is our habit, we parked at the Anchorage train station near the port, in order to avoid the traffic and the expense of downtown parking. That's the train station and beyond it is the Port of Anchorage, check out those ice cubes in the water. Makes me cold just looking at it. The long covered stairway leads up from the station to 3rd Street, in the middle of downtown. 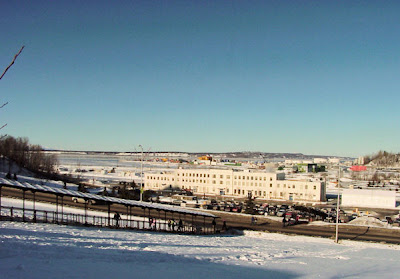 Since we were at the train station, we started with the snow sculptures, which are over in the train yard to the right of the station, out of frame in the above picture.

This was one of the better sculptures, title Space Picnic, and sponsored by my favorite communications company (who has kindly kept my connection up this morning, long enough to upload this post, yah GCI). Over the astronaut's left should is my son acting like a twelve year old, and my wife: 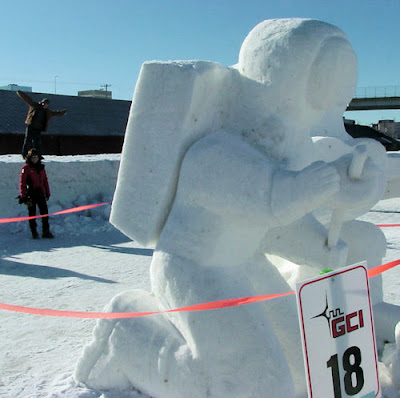 After the snow sculptures, we visited the train station and wandered through the model railroading tables - which my son and I always enjoy. Then we tramped up the stairs to the 3rd Street carnival (that's Becky in the red Iditorider jacket, and Jimmy in the skater punk hat, bottom left): 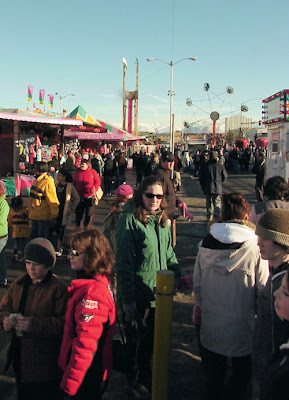 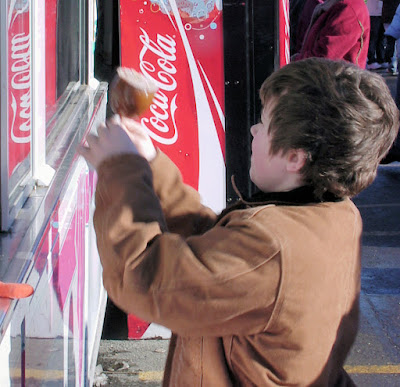 The wife and I settled for Starbucks. 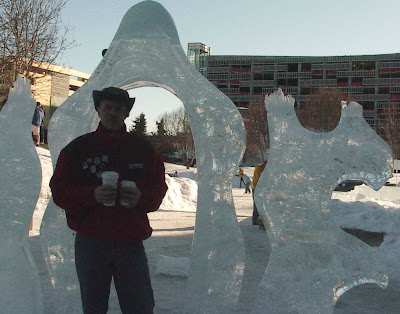 We stopped by the 3rd Street Fur Auction and watched millions of dollars worth of animal hair change hands and listen to the auctioneer. Probably not something you see at a festival outside of Alaska. We don't get much in the way of protesters here, and the pelts are gorgeous. In the below picture Linux guy (the gent in the red hat - get it?) is holding up a matched pair of Arctic fox winter pelts - I think they went for $150 a piece, which is a damned good price. A dozen more and you'll have fine warm coat. These will probably end up as hats. 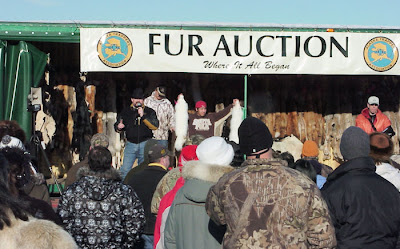 Behind the Fur Auction was the native blanket toss, where the kids where 'getting some air' the old fashioned way: 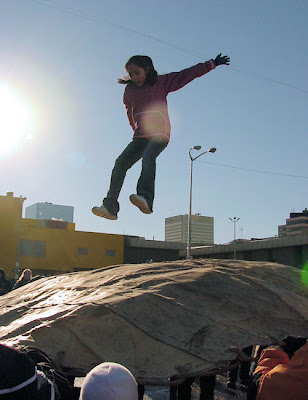 Then on to the main event, 4th Street. Bet the main street in your town doesn't look like this: 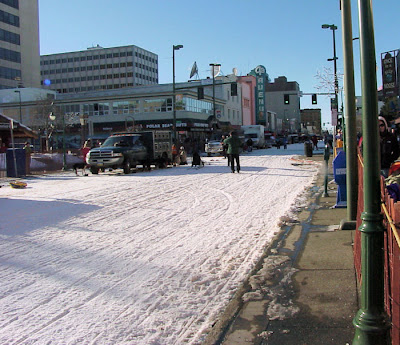 Normally 4th Street is filled with cars, and we do plow it occasionally. During Rondy, snow is trucked in and about ten blocks of it becomes the domain of the mushers and their dogs. In two week the Iditarod ceremonial start will take place right here. The dog teams on the street today won't be in that race, those guys are out training right now. For those you not familiar with mushing, those are dog sled trucks parked on the far side of the street, the sleds go on top and the dogs each go in a side dog box. They're a common sight around here this time of year: 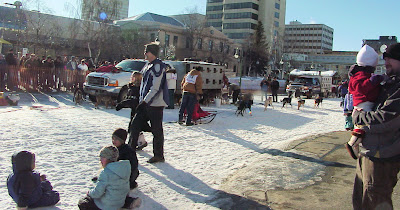 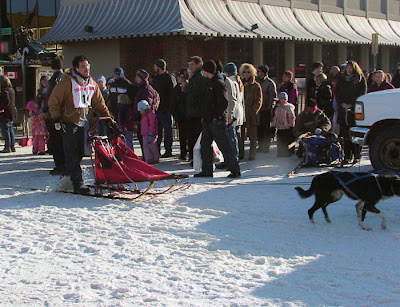 My son, drinking hot chocolate next to one of Anchorage's weirder sculptures. 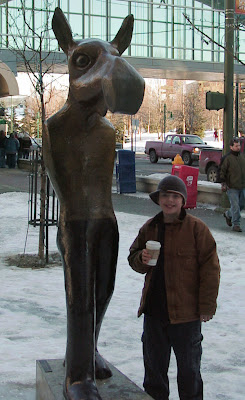 This year there was something new - the Reindeer Run. Hmmm. OK. See basically the idea is that 2000 fools paid $20 to run in the street with about ten Reindeer, ala the Running of the Bulls in Pamplona, Spain. Couple of problems here, the biggest being that reindeer are the small sheep-like, passive, domesticated versions of caribou. Aggressive? Nope. Excitable? No, not really. Mostly they stood around - and it took a guy out front with a bucket of grain and several plucky folks behind with spray bottles full of wolf piss to get them to do more than just stand around and watch the crowd curiously. Basically, it ended up being a large mob of people running down 4th Street with a couple of reindeer tagging along like dogs at the start of the Boston Marathon.

But it was fun anyway, in a uniquely Anchorage sort of way, and we had a blast: 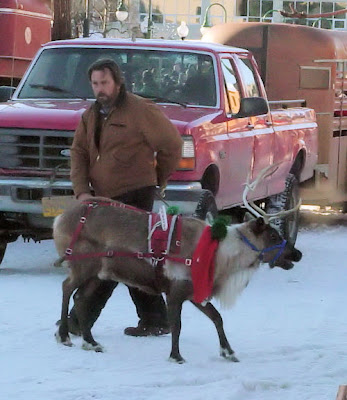 Everybody enjoyed it, including this dog - who had one hell of a sense of balance. He sat, lay down, and walked along that very narrow handrail for a full hour, watching the Reindeer Run and the people below, and you could tell he was enjoying himself immensely (don't worry, his owners were up there with him, and he was obviously very used to it and knew exactly what he was doing). 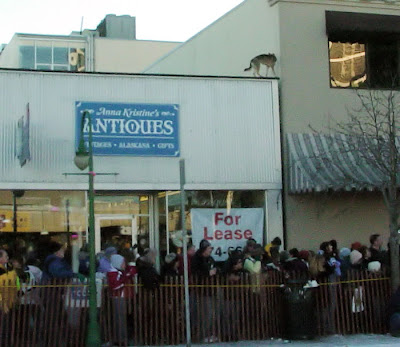 Anyway, we had a great day and didn't get home until late. If you're ever in Alaska in the dead of the arctic winter, make sure you get to the Rondy, you won't regret it.

Two weeks to the Iditarod. Can't wait.
Posted by Jim Wright at 1:01 PM