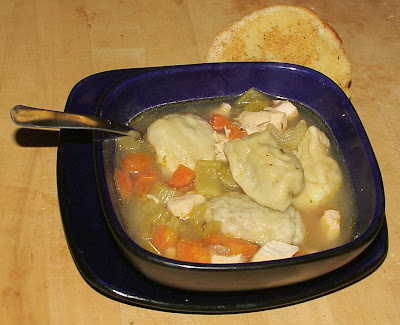 First, what it is not.

Second, what it is: Kreplach are small stuffed dumplings, historically made by Ashkenazic Jews. They were originally made from leftover meat but can be equally good made from freshly prepared ground beef, chicken, mashed potatoes, or other fillings. Fillings tend to be family recipes and many people have their own traditional favorite and consider that to be the only right filling. Kreplach are similar to Italian ravioli in concept, and because the dumplings are often served in a simple chicken broth, they are commonly referred to in New York as Jewish Wonton - for their resemblance to the Chineese dumpling soup. Kreplach is a traditional dish served on the day before Yom Kippur (the Day of Atonement) or on Hashanah Rabba (the 7th day of the Festival of Booths) or on Purim (the Feast of Lots).

Third, the recipe. This recipe is pretty simple and easy to make. This particular method is the one I used, it's based on several recipes and advice and guidance from Nathan Gendzier of the Brooklyn Gendziers (I believe that Gendzier is Yiddish for 'most excellent cool dude and soup guru').


All three of us here at Stonekettle Station give this soup two thumbs up with a snap and a tail wag. Good stuff, you really gotta get you some of this.

Update - A point of procedure: What the hell is the plural of Kreplach? Is it kreplaches? Kreplachi? Kreptephemeri? What?
Posted by Jim Wright at 8:54 PM