Do they have it in HD? (apparently NOT) 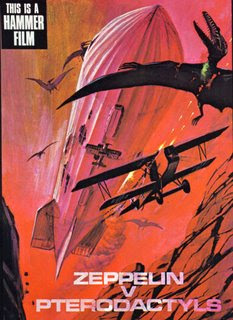 I mean, Zeppelins, dinosaurs (pterosaurs, whatever), what's not to like?

UPDATE: The picture was a movie poster for the never made Hammer film Zepplins vs Pterodactyls. For some reason the link has stopped working. So, you'll just have to visualize Zeppelins and biplanes fighting the giant flying Pterosaurs. Sigh.

UPDATED AGAIN: I found a picture of the original British movie poster. So here you go. Man, I'd love to see a remake of the this. I love Airships, I find them fascinating. I would have given anything to see the Graf Zeppelin or the Hindenburg, or the USS Shenandoah, USS Macon, or USS Akron in their glory days. And Pterodactyls in full combat with biplanes, Man, it just doesn't get any cooler than that. Probably needs to star Wil Smith, just for full effect. Until somebody gets around to it, I guess I'll just have to settle for the I Am Legend remake of the Omega Man.

And AGAIN: Hammer Films never made this movie, but they'd taken the idea from an old Republic Saturday matinée serial from the 1930's. Like everything else in the world, that clip can be found on YouTube. I'm not quite sure what's going on, but you've got to love the flying wing and the actual footage of the zeppelins. See if you can spot the big name actors, hint a stunt man named Marion Wayne makes a very brief appearance in the Zeppelin gondola.