It doesn’t last long and you really need to taken advantage of what nice days you get.

Saturday we went to see Terminator Salvation in Anchorage (Woohoo! Awesome! More on that later) and then I spent most of the afternoon doing spring maintenance on our ATV’s, figuring that if Sunday was decent we’d get out and do some exploring.

I even demonstrated my optimism by loaded the ATV’s onto the trailer, coupling up the truck and parking the whole rig in the shop in preparation for an early start the next morning.

Sunday dawned clear and beautiful with temperatures in the low 60’s.

So, we loaded our day packs and the rest of our equipment and set out for the Eklutna Glacier Trailhead in Chugach State Park. 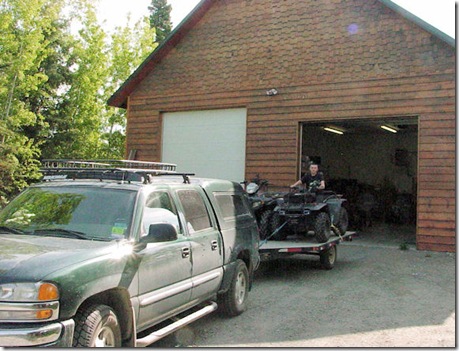 (Just for the record, we made the kid ride inside the truck)

The trail starts at the Eklutna Lake State Park camp grounds, and follows the edge of the lake roughly ten miles to the Bold wilderness airstrip. Then the trail continues on, following the Eklutna river another three miles up into a deep valley, a mile or so short of the glacier. If you want to explore the ice, you have to do the last mile on foot over very difficult and dangerous terrain, even rugged 4x4 ATV’s like ours can’t navigate that climb.

The trail itself is an improved jeep trail, though vehicles larger than an ATV are not allowed. Speeds are limited to 15MPH and there is a lot of bicycle and foot traffic so you need to pay attention and observe basic trail courtesy. There are some rough spots, but nothing difficult and it’s an easy trail for a beginner and a good place to refresh your riding skills after the long winter. There are two remote wilderness campsites along the trail, one at 8.8 miles and one at mile 11. There is also a wilderness cabin at mile 12 that you can rent.

The views are spectacular. 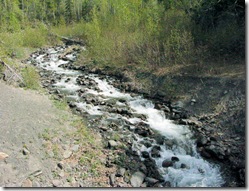 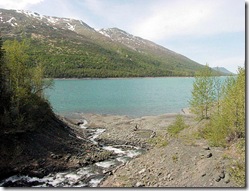 …but its primary input comes from the Eklutna River which is in turn fed by glacial melt. Because of this, the lake’s water level can change by as much as sixty feet, depending on season. The Eklutna glacier itself grinds over the bedrock and its weight powders the stone into fine talc, called glacial flour. That flour washes down the river and into the lake, which is what gives the water that otherworldly opalescent milky-blue glow. 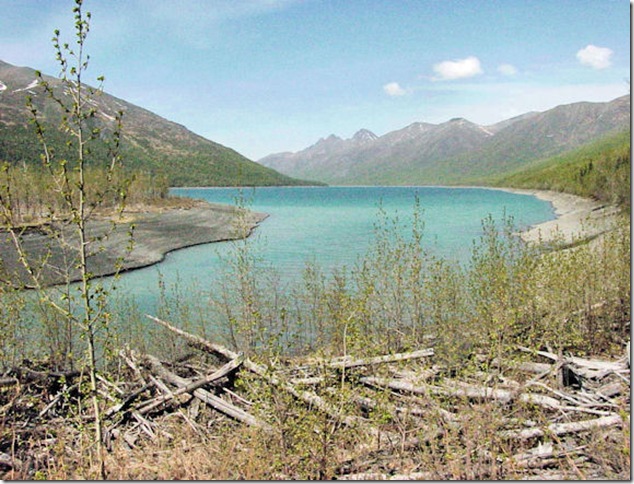 You wouldn’t think so, but fish live in the lake, Dolly Varden mostly. They eat bugs and algae and crap cement.

The picture above is the far end of the lake, which we reached in about an hour, then we turned to follow the river towards the glacier, which you can just see nestled in that deep valley in the center of the picture below. 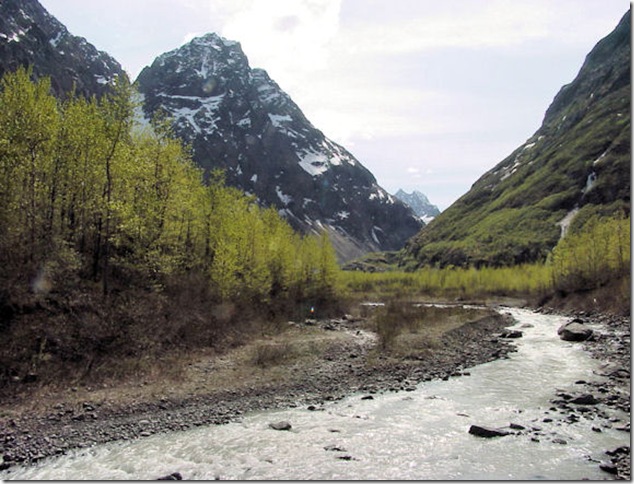 The trail crosses the river several times. The state has built bridges, while this isn’t as exciting a fording a glacially cold, fast moving river on an ATV, it’s a lot safer and more importantly has a lot less impact on the environment. All traffic is limited to the trail and the bridges, this eliminates random damage by idiots on ATVs and prevents erosion (It also has the added side benefit of eliminating most of the idiots, as they think the trail is too tame and they look for adventure elsewhere leaving the traffic here mostly well mannered and well behaved). 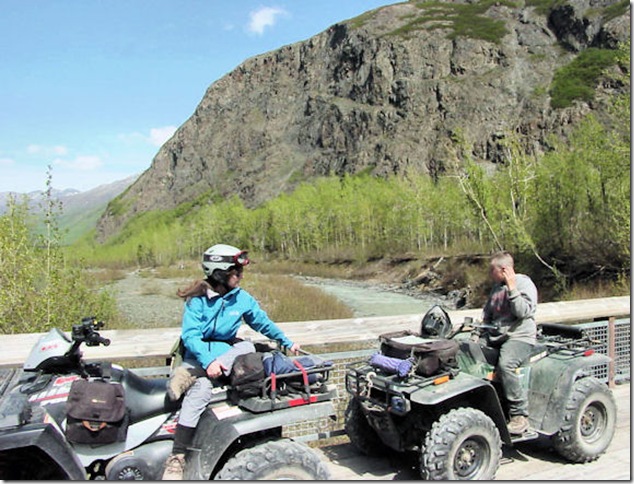 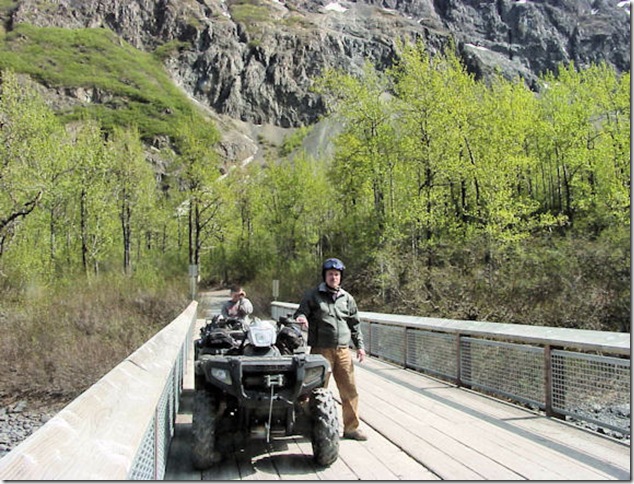 Note: You might notice in the upper picture, that my son’s hair is cut short in a high and tight military style. I bribed him into to it. The day before this trip I was so damned sick of that mop he usually sports that I offered to buy him a very nice model rocket - if he’d get his hair cut military style for the summer. He agreed. Bawahahahaha! You have no idea how much this tickles me. Maybe he’ll grow to like it. I told him it makes him look older. Also, chicks dig Marines. He said it was a lot more comfortable inside his helmet. I consider that a promising sign.

Several miles past the lake we came to Serenity Falls. 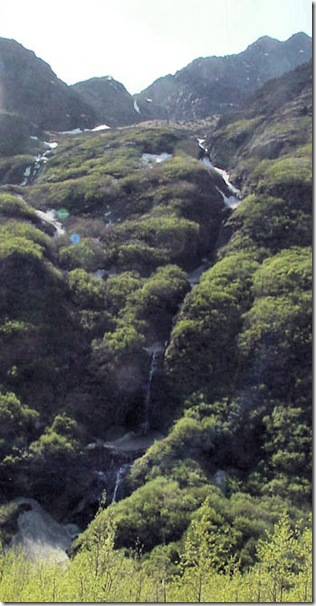 It doesn’t look like much, but later in the year when the melt is in full gear and the water is really flowing, it’s pretty spectacular.

And finally, we came to the end of the trail, about a mile below the glacier. We ate our lunch and decided not to climb on foot to the ice field itself. It’s pretty treacherous up that way, vertical in some spots, muddy and wet.

And in addition, the bears were out in force.

We could see two black bears stalking mountain goats across the valley, which we watched with binoculars for about an hour. 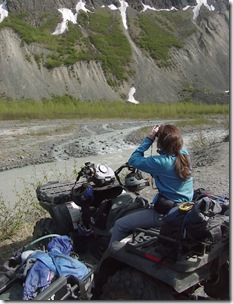 The goats seemed most unconcerned. I had no doubt that unless the bears were armed with rifles, they weren’t going to be eating goat for dinner. That’s them circled in the picture below. Hard to see in the picture, but hey what do you want? They were damned near a mile away, and a thousand feet up the side of a cliff. 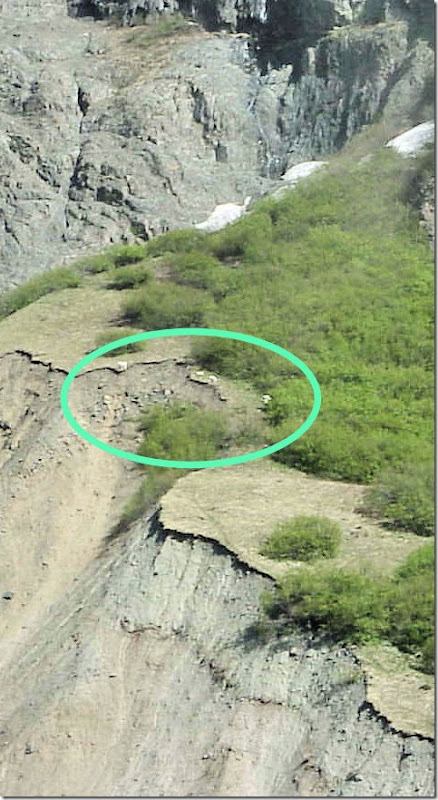 Eventually, one of the bears got tired of the stalk and went off to find better pickings. We watched him cross an ice patch and disappear into the alder scrub. That’s him, that little black dot in the picture below.

On the trail back, we got a much better and much closer view of a black bear. 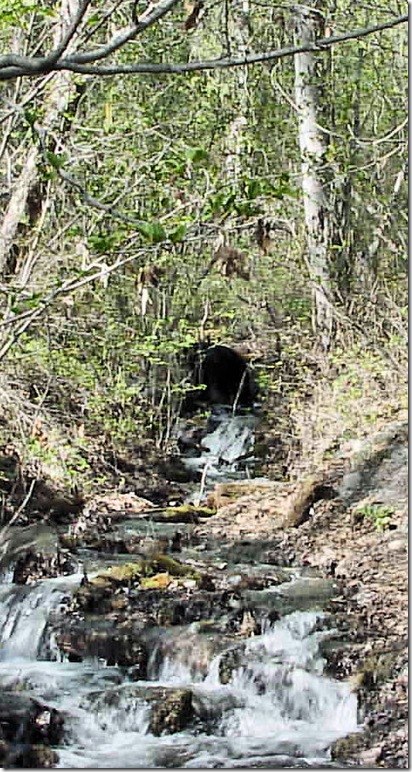 That’s him, that black blob in the picture above, crossing a stream about 50 yards away. Let me tell you something, getting a picture of a pitch black bear in blinding sun is a royal pain in the ass, especially when he’s moving. Out the ten shots I took, that’s the only one that’s even vaguely bear shaped. He’s a young male, maybe 120 to 160 pounds. We came around a blind corner and caught him in the middle of the road twenty yards ahead of us. My wife and I were on the lead machine, with my son following. I braked hard, and my wife signaled my son to stop. Both my wife and I were armed, me with the large frame .44Mag, and my wife with a .45ACP auto. Either weapon was more than a match a small black bear. We believe in prudence when it comes to Alaskan wildlife however and we have no desire to shoot a bear – well, other than with a camera. We knew there were bears on the trail, the rangers had warned us before we set out, and we’d seen bear scat along the way, and we were prepared for the encounter.

He wanted nothing to do with us, he turned and ran into the woods and I snatched the big camera out of the saddlebag and snapped that shot as he crossed a stream and disappeared into the brush.

A large group of hikers came up the trail then, and another group from the other direction, we warned them about the bear danger and continued on.

We crossed the final river and hit a muddy patch of the trail. My son had been pestering us the whole way for us to allow him to plow through the water at speed. So when we came to a flooded portion of the trail, we let him have his wish. 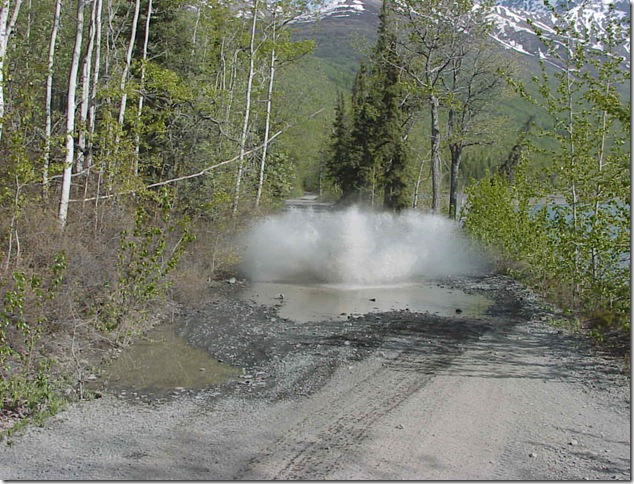 He was quite happy with the results. 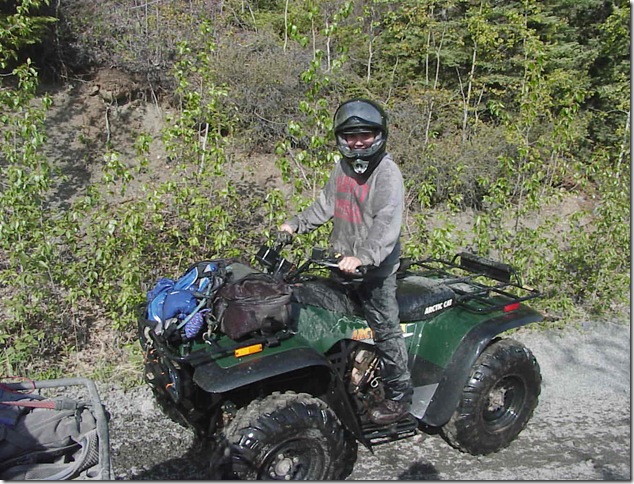 Until he learned that he would be washing the muddy machines when we got home, that is.

Round trip, we covered just under 30 miles (we took a couple of detours to check out the Bold Airstrip and the campsites). The smaller Arctic Cat performed perfectly, but the big Polaris 700 gave me some grief. It lost power several times and stalled – for all the world like it wasn’t getting gas. I popped off the engine covers, figuring it was a clogged fuel filter, but when I vented the fuel injection bar at the relief value gasoline squired two feet sideways under pressure. Plenty of gas. Probably a wet or dirty electrical connector then. The Cat is fully manual, there’s not much to go wrong with it, but the Polaris is a computerized electronic fuel injected monster, it’s an excellent machine but the more complicated you make them, the more that can go wrong. I carry two full tool kits on each machine, and there’s not much I can’t fix on the trail, and so I fiddled around a bit until I got it running again. Worked fine for the rest of the trip. But if necessary I could have towed it back with the other machine. This afternoon I’ll strip it down in the shop, run the diagnostics, and find the problem.

We were filthy dirty and dead tired by the time we got home. But a hot shower and a hot dinner fixed most of that.

It was a great day.

What adventure did you find this weekend?

Email ThisBlogThis!Share to TwitterShare to FacebookShare to Pinterest
Labels: Things I do for fun, Things in Alaska