You might have noticed, I’ve been a little light on the posting for the last couple of days.

OK, for the last two weeks.

Summer’s here and we’ve got a million things to do before the snow flies again.

For example, here’s ShopKat engaged in a project that takes up a significant fraction of her day: 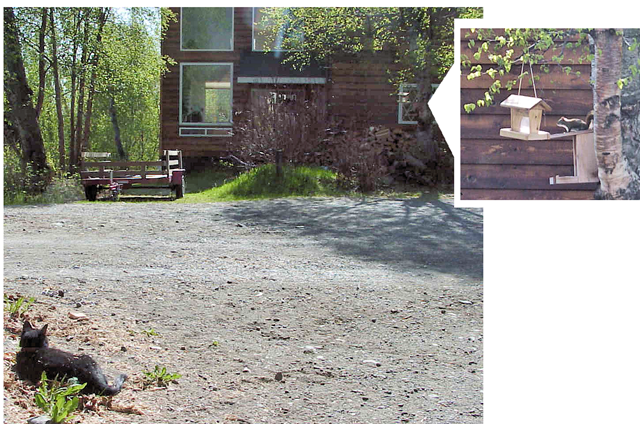 Notice the object of her attention in the detailed blow up.  That squirrel is an asshole.

You’ll also notice how green it’s gotten in just the last three or four days.  Four weeks ago I was shoveling snow off the porch, today I have to mow the grass.  See why we don’t observe spring in Alaska?

I have to rewrite some paperwork, including my resume, for a job I’m considering.  It would be a stint with the military on a project that I am uniquely qualified for.  I may tell you more about it later.

And finally today I have to finish a pile of Amish Style Baskets. Argh! I hate these things.  You remember the spiral cut baskets I mentioned a while back right?  These are similar, but cut into the shape of an Alaskan King Salmon. 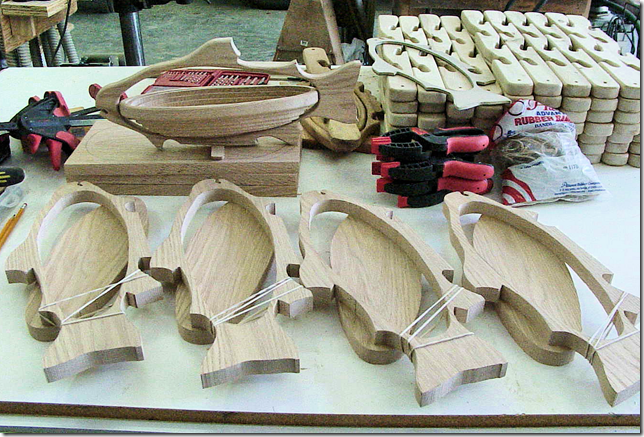 See the finished one in the middle of the picture?  It’s sitting on top of a pile of oak blanks. Those blanks get cut into the shapes you see in the foreground.  In order to cut out the middle on the band saw I cut through the edge there, just behind the lower rear (or caudal) fin. Once the inside piece is cut out, I glue the outer frame back together – hence the rubber bands holding the pieces in place until the glue dries.  All the pieces are sanded and the edges are rounded over on the shaper table. Then the inside piece is cut into a spiral using the band saw, and the resulting basket is attached to the inside of the fish shaped frame with pivot screws – and those are an enormous pain to position correctly.  However, the end product is pretty cool.

In the back right of the above photo you can see stacks of plant hangers. These started out as eight foot planks of rough sawn birch. I run them through the planer which smoothes the boards and makes them all the same thickness.  Then the lumber is ripped into 3” wide stripes on the tablesaw.  You can see four alternating notches down the side of each piece, those hold 6” terracotta planting pots.  Because the pot holders have to be cut very precisely, I cut the notches with an industrial scroll saw. Then the edges are rounded over on the woodpecker table and a hole is drilled in the top to hold a loop of twine.  I make roughly a hundred of these in a day.

I did manage to finish one my signature sled dog bowls this week, which makes me happy. 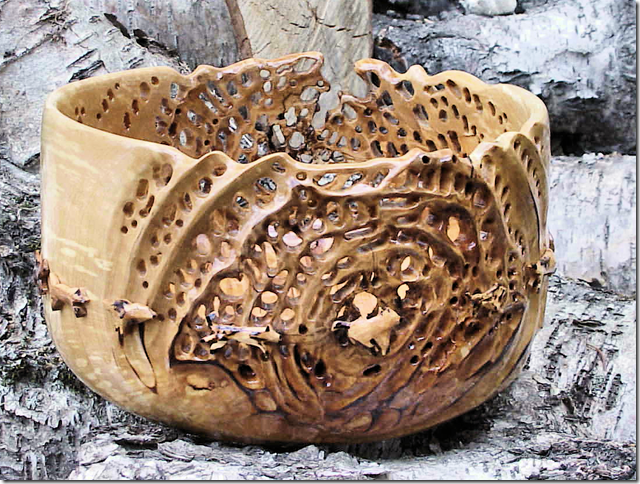 This piece is turned from green Alaska birch heartwood. Then carved and sculpted, and allowed to dry slowly for several months.  I then carve a dog team and musher from birch burl and attach it to the bowl with glue. The whole thing is finished in Danish oil and hard glossy varathane.  This piece is sold.

And as I mentioned to Beastly in yesterday’s post, I have one of the Shopsmiths torn apart.  The bearing on the control sheave started squealing yesterday in the middle of making salmon baskets.  Squealing bearings are bad.  I shut everything down and disassembled the machine for maintenance.  I need to go finish that and get the machine back together so I can finish up the rest of this week’s projects.

So, if you need me, Internet people, I’ll probably be in the shop for the rest of the day.