The Secret to Success and Universal Happiness

There’s really nothing it can’t do.

Well, there you go, the secret to success and universal happiness. Make sure they spell my name right on the Nobel Prize.

Thanks for coming and drive safely.

I see, I have to spell it out for you.

Historically buttermilk is the thin tart, tangy liquid left over from churning cream into butter – and today that liquid is referred to as traditional buttermilk – as opposed to, say, whey, which is the liquid left over from making cheese. Traditional buttermilk is not common in the West these days (though it is still very common in places like India where it is called “chaas”). Here it’s mostly used as a supplement for animal feed, or as a starter and additive for certain food products. You’d have to go to a working dairy to obtain it. In the old days buttermilk was often fed to the pigs, used to start bread, or consumed by the poor – and in the latter case often made up a significant fraction of their daily calorie and vitamin intake. Prior to the Gorta Mor (the Great Famine or the Irish Potato Blight in 1840’s Ireland), many poor Irish lived almost exclusively on the “peasant foods” of potatoes and buttermilk – and were some of the healthiest people in Europe as a result.

Nowadays, the buttermilk you buy in your local supermarket is almost always cultured buttermilk – and has nothing whatsoever to do with butter making. It is a fermented diary product made by adding lactic acid producing bacteria (Streptococcus lactis) to milk. There are several variations, including Bulgarian buttermilk, made in a similar fashion but using lactobacillus bulgaricus, which produces a much more sour product. Where traditional buttermilk is thin (though usually thicker than plain milk), cultured buttermilk is thick and creamy, more like like heavy whipping cream than its namesake and smells like really, really good sour cream.

Whether traditional or cultured, buttermilk is a tart and tangy. That sourness comes from high amounts of acid produced during fermentation, when the milk’s lactose is converted from a sugar into an acid by the bacteria. As a result of this process (either naturally fermented traditional buttermilk, or artificially diary-cultured), buttermilk itself is much lower in fat and calories than regular whole milk and cream. It is high in potassium, vitamin B12, and calcium. It is more easily digested than whole milk due to the bacteria (similar to yogurt) and allows for better absorption of protein and calcium.

I like to drink it ice cold – but where it really makes a difference is in cooking.

Not sure you’d like it? Start with something simple, use cultured buttermilk instead of butter and milk (heh, heh) or cream the next time you make mashed potatoes. It adds enough fat to the starchy potatoes to make them creamy and smooth, but without the huge load of fats that butter and cream do – and it adds a tangy sour cream flavor, without the added fat of sour cream. Cool, huh?

Making Beef Stroganoff? Use buttermilk instead of sour cream. Better flavor, much less fat. (Bulgarian buttermilk is perfect for this dish, very tangy).

Last night I made deep fried Alaskan Halibut. Now, traditionally, here in Alaskan you batter the hell out of halibut. Most Alaskans dunk chunks of halibut into a thick glop made from cheap beer and flour, and then deep fry the resulting mess into soggy balls of dough that bleed grease like Ronald Reagan’s hairdo. Deep fried halibut chunks are a staple in every restaurant, tourist dive, roadhouse, flophouse, and outhouse in Alaska. With few exceptions (such as the Whitespot Cafe on 4th in Anchorage) beer battered halibut chunks are an abomination. Here’s a better method – and this works with any thick fleshed white fish, such as cod – cut the fish into small bite sized pieces. Coat those in cultured buttermilk and then dredge in a mixture of flour, yellow cornmeal, Cajun seasoning or Old Bay, powdered garlic, powdered onion, and some fresh ground pepper. Shake off the excess and let sit for a couple of minutes, until the cornmeal softens and the coating becomes damp. Deep fry in 350 degree oil until lightly browned. Remove from oil, drain on paper towels, keep warm in a 250F degree oven. They won’t get soggy, and they won’t be oily or greasy, and they’ll taste better than any halibut chunks you’ve ever had.

Now that you’ve got some halibut chunks, you need some hushpuppies to go with them – and that fishy flavored deep fryer oil is the perfect thing for making them. While your fish chunks are keeping warm in the oven whip up the following recipe:

Mix together 1 3/4 cups yellow cornmeal, 3/4 unbleached AP flour, 1/2 tsp salt, 1/2 tsp baking soda, 1/2 tsp fresh ground black pepper, 1 tbls onion powder, and 1 tbls of Old Bay seasoning. In a separate bowl mix together 1 cup cultured buttermilk, 1 large egg, 1/2 cup of finely chopped green onions (I run mine through my KitchenAid food grinder to get pureed mush, and a 1/4 cup of coarsely chopped chives (the green onion stalk), and 2 tbls of chopped fresh garlic (the pre-chopped stuff in a jar is just fine). Add the liquid ingredients to the dry and mix only until a thick dough forms. Don’t over mix, lumps are good. Say it with me, lumps are good. Let the dough stand for fifteen minutes while the cornmeal softens. Now the secret is to make small hushpuppies. Small. You’re not making donuts here. Take a regular metal table spoon (the kind you use to stir your coffee, not the measuring device), dip it in the hot grease first, then scoop a half spoon sized portion of dough and carefully drop it into the 350F degree oil. Do a couple, but no more than six or eight. Don’t crowd the fryer. Keep the oil temp no higher than 350. Be patient. Wait until the dough puffs up into full globes and the portions in the oil have turned golden brown, then bump each one with your spoon and they’ll turn over all by themselves. Fry for a minute or until the entire hushpuppy is golden brown. Remove from the oil, drain on paper towels, then put them in the oven with the halibut chunks until you’ve got the whole batch done. Don’t rush. Don’t crowd. Don’t raise the oil temperature or they will burn on the outside and the inside will be raw. Don’t do it.

I suppose you’ll be wanting desert too?

OK, how about buttermilk banana bread?

Mix together 2 large eggs, 1 cup sugar, 1/4 cup vegetable oil, 1 cup (2 to 3) very ripe bananas, 2 tsp vanilla extract (use the real stuff for crying out loud you cheap bastard). Beat until creamy, about two minutes in a stand mixer using the whisk. In a separate bowl mix together 1 tsp baking soda, 1 tsp baking powder, 1 tsp salt, 1 tsp cinnamon, 1/2 tsp nutmeg, 2 2/3 cups AP flour – mix this thoroughly, I use a hand whisk, it’s important that all the dry ingredients are completely mixed. Completely. Add the dry ingredient into the wet ingredients all at once, mix until just dampened (in a stand mixer use the paddle). Add 1 cup cultured buttermilk (or plain yogurt), and 1 cup chopped walnuts. Mix completely. Don’t over mix, you’re not making French bread or pizza dough here. Over mix and the loaf will be tough. Pour into a 9x5 loaf pan and bake in a pre-heated 350 degree oven for 1 hour (usually a little longer, this morning’s loaf for example took 1 hour and 20 minutes before the test stick came back clean. If the loaf top is getting too dark, tent with foil). Remove from oven, let cool on a wire rack. Top with cream cheese frosting and chopped candied pralines (oh please, you’ve already put in a cup of sugar, you might as well go all the way – besides, it’s made with buttermilk so it’s healthy anyway. See? Stick with me, Kids). 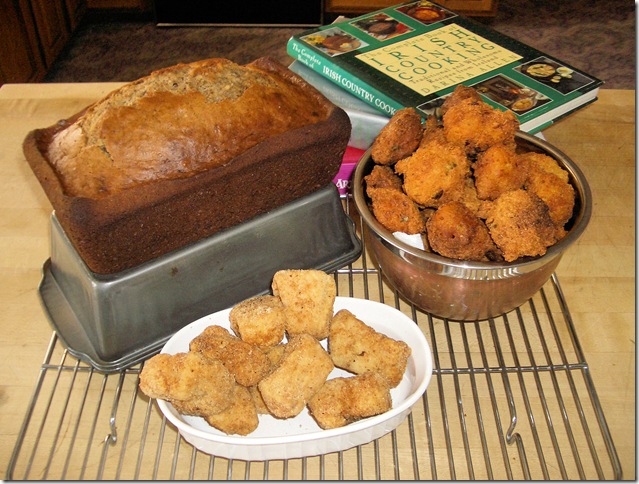 Trust me on this. Buttermilk. Secret to the universe.