Yesterday my son came up the driveway, pushing his bike and looking all dejected.

“It’s too hot! It’s just too hot to do anything. I’m going inside.” He stomped off towards the house.

“Uh,” I replied. Rather cleverly too, I thought, given the circumstances. “It’s too hot” isn’t something you hear people in Alaska say all that often. Especially during break up. Most people are overjoyed at the warmth and the sunshine after seven months of darkness and snow and sleet and snow and ice and snow and wind and snow and minus 30 cold and snow. Did I mention snow?

I glanced at the outside shop thermometer, it was 62 – that’s like 17 degrees in Canada. It was also damp and rainy. My bones ached from it, despite the heavy sweatshirt and Carhartt work pants. I wasn’t cold, but I sure wasn’t hot. In fact I thought 62 degrees, or even 17 Canadian, was just about perfect.

In the last three or four days everything has started to turn green. The snow is gone from the valley floor, though the mountains are still covered in it, and the pass is still twenty feet deep in drifts. But down here in the MatSu it’s just plain gorgeous.

She was lounging in the sunlight in front of the shop. 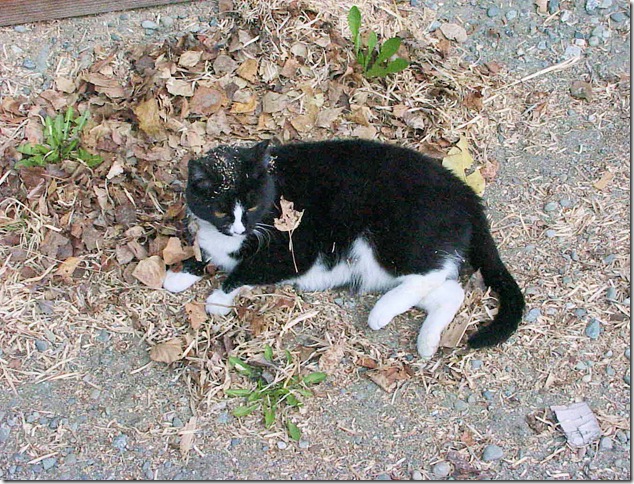 She’d spent the morning stalking a squirrel. It was pretty funny to watch and the squirrel was in no danger. ShopKat would spot the wily rodent sitting on top of the squirrel feeder. She would hunch down and belly crawl across the driveway, inching closer and closer. The problem is that ShopKat is built sort of like a chunky bowling pin, and with her black and white coloring she looked for all the world like a penguin playing soldier, and just about as effective. She’d get within about twenty feet of the squirrel, who was watching intently with amused black eyes and malice in its heart – then, without warning, the tree rat would chatter loudly and zip! it would be thirty feet up the big birch tree above the feeder, laughing its mad rodent laugh and spitting sunflower seeds.

ShopKat would slink dejectedly back across the drive to the shop, and sit in the open door staring forlornly at the feeder until the squirrel returned. Then the whole thing would start over.

Eventually ShopKat moved her surveillance post to the wood pile and assumed a heroic pose. 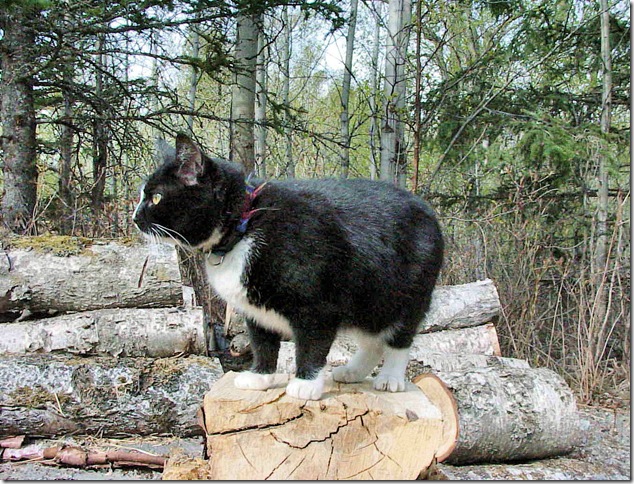 The squirrel was not fooled – so eventually ShopKat lost interest and went off to pout on a log behind the shop. 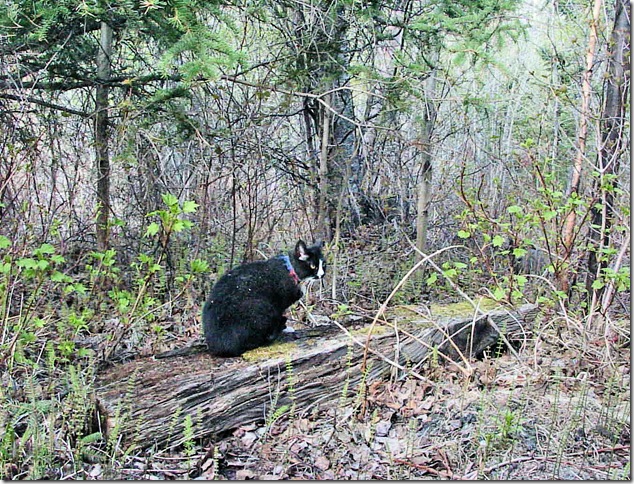 I figured she would go play in the woods for a while, but it clouded up and started to rain. Rain does not please ShopKat, she returned to her previous perch in the doorway.

My son came back outside refreshed from the cool interior of the house (and a round of Motostorm on the PS3).

“Man, I’m glad it finally cooled off. I’m going to ride my bike!”

“Du-uh!” (how is it possible for a 12-year old to make a three letter sound of derision into two syllables? He gets that from his mother I suspect). “That’s what makes it cool enough to be outside, Dad.”

Indeed, the temperature had dropped to a much more tolerable 59F – that’s like negative five in Canada I think. My teeth wanted to chatter.

I glanced at ShopKat as my son rode out of sight, she ignored me. Her expression said very clearly “Don’t look at me, he’s the product of your genetic material.” She had me there.

She spent the rest of the day sitting in the door, watching it rain.

Me? I filled the squirrel feeder and put on a sweater.

Email ThisBlogThis!Share to TwitterShare to FacebookShare to Pinterest
Labels: Things about cats, Things in Alaska