As I've mentioned, repeatedly, it's been raining here.

And it's been cold.

In fact we've got some fresh snow on the mountains.

This does not make me happy, but then again nobody asked me for my opinion.

Anyway, we try to get out on the weekends and do a little hiking. This last weekend rained both days, Saturday it poured cats and dogs, so any kind of outdoor adventure was right out. My wife took one look at it, and decided to go in to work instead - yeah, it was that bad. Beastly and I spent the day in the shop. Sunday was a bit better, drizzling rain, but that appeared to be the best we were going to get - so we decided to take advantage of it. We needed something close to the house, and something short, and preferably a location that we hadn't been to in a long while.

Becky and I thought about for a bit (the kid doesn't get a vote, and neither does Beastly). We thought about the nature trail in Eagle River, the one that leads up into the Chugiach, but there have been a number of bear attacks there lately and I really wasn't interested in that much adventure. Then we hit upon Thunderbird Falls. Little short hike, about a mile and a half, twenty minutes from home - and we hadn't been there in, oh, about ten years. Perfect. Woohoo!

We loaded up the kid, Beastly, the dog, and for good measure I grabbed the day pack and my .44cal Colt (because while Thunderbird Creek is not a salmon spawning stream, there is the occasional stray Humpy or King - and where there's salmon, especially rotting salmon, there are bears).

It was as neat a place as we remembered, and the hike was an easy one up to the viewing deck - which is good because the cold and damp has been making my bones hurt.

It was sprinkling a little, but we had worn our rain jackets, so we decided to hoof down the lower trail to the river itself. 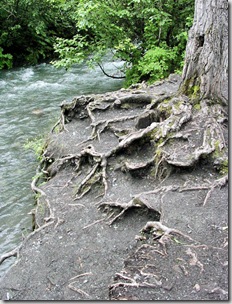 There were some cool trees at the bottom of the trail near the river, erosion had exposed their root system. 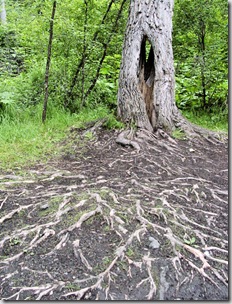 I thought the exposed roots looked strange and alien.

There were a few stray salmon in the river. They looked like a couple of reds, near as I could tell. Salmon normally return to the same stream they were born in, but a few occasionally make a bad turn and find themselves up the wrong creek. (What the? This isn't Pizmo Beach! Maybe I should have turned left at Ahlbecorkee! -[and if you don't get that, I don't want to know you] Consequences, schmonsequences, as long as I'm rich). This is nature's way of propagating the species, the strays sometimes find new spawning grounds - which is funny if you think about it, being as it's the stupid fish that become the progenitors of new salmon runs. Mostly though, the strays end up in places like Thunderbird Creek, dead ending up against the falls in fast water with no place to do the wild thing. They can't spawn and eventually they turn bright red and rotten and then die. In that order. 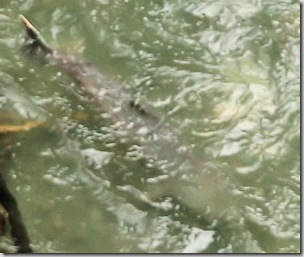 This a fairly good sized female, maybe 15 pounds or so. She's dead, she just doesn't know it yet. No bears around, none that we saw anyway. Which was just fine by me.

I got as close to the base of the falls as I could and took a series of sweeping photos down the river. Panoramas, it's my new thing.

Clicking on the image will take you to a full-sized, hi-resolution image in my Picasa album.