After two weeks of rain, this last weekend was reasonable decent.

I was getting shop fever, and wanted to get the hell out and do some hiking in the wilds of Alaska. Fortunately for us, the wilds of Alaska are pretty much right outside the front door. So, we loaded up Beastly, the rain jackets, the daypacks, and the dog and headed up to Hatcher's Pass to try our hiking boots on the mud of the Reed Creek trail. Which leads, naturally enough, up into Reed Valley and to the old Archangel Gold Mine. Follow it far enough, and it will take you up over the mountains and a high glacier and eventually to the wreck of an old WWII bomber that crashed during the war. Twelve Airmen died in that crash. The Army long since removed the bodies, but there was no way to get the massive carcass of that old B-29 out of the mountains, and so it's still up there - a destination for hikers and geocachers and war buffs.

We got a late start and the weather wasn't great, so we didn't figure on making the crash site. We planned to reach the upper end of the valley above the old mine - a distance of about five miles in, and the same route back out. Ten miles would really be pushing it, but what the hell, we weren't in a hurry and it's daylight pretty much 24-hours a day this time of year.

The limiting factor would, of course, be Beastly and me. Both of us are in pretty good shape considering twenty years of military service a piece and various old, poorly healed injuries. Beastly's got problems with a repeatedly broken ankle, and I've got problems with my whole left side. So we figured to make it as far as we could and turn back before we crippled ourselves. I wasn't sure we'd even make the mine site, a lot depended on trail conditions - which could be pretty ugly after two weeks of rain - but hell, we figured we'd give it a shot.

Then we got a break, when we reached the Archangel road parking area, the road gate was open. Normally, the Bureau of Land Management (the whole area is BLM land) keeps the road closed. You park out on the main road and walk in. But every once in a while they open the old mine road and let you drive in about two miles to the actual trail heads for Archangel Valley and Reed Creek. Woohoo! That knocked about four miles off the trip, and we figured we could do the remaining six easy enough. 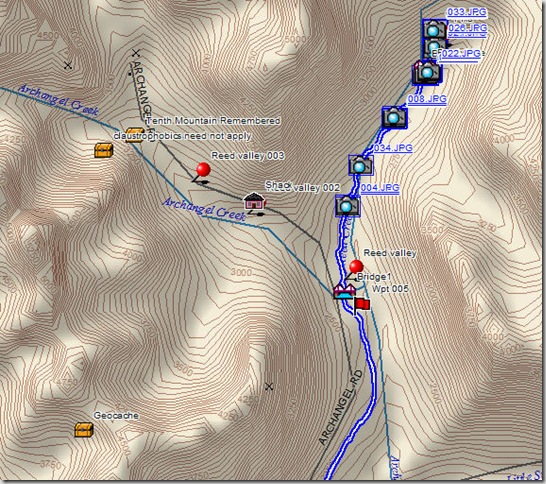 The road was pretty rough, but we made to the trail head without problems, bouncing along in the truck. We parked at the old fire bridge (Bridge 1 marker on the map above) and geared up. There were quite a few folks at the trailhead, including a troop of boy scouts from somewhere in Pennsylvania, loaded down with ice climbing gear and intent on exploring the glacier and reaching the crash site.

The Reed Creek Trail looked good from the parking area, surprisingly dry and in decent shape, considering that three weeks ago this whole area was covered in snow and mud. We slathered ourselves in bug dope and headed down the trail into the valley. 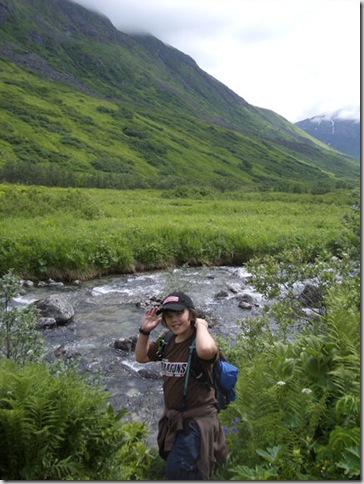 Beastly, who is an avid photographer, kept stopping to take pictures of the flowers. 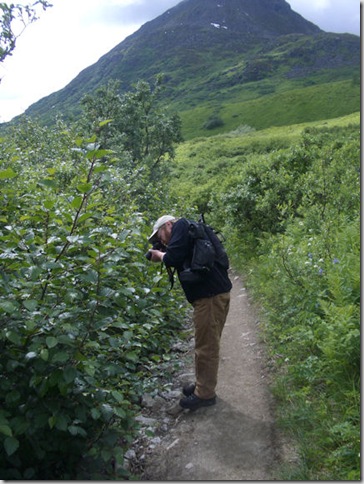 After exactly two miles, according to the GPS, we emerged from the heavy foliage along the creek and could see the old mine buildings ahead. 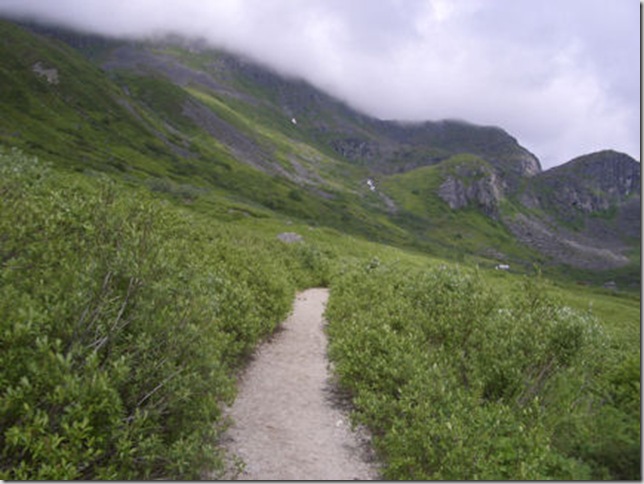 That's the mine, that little silver rectangle to the right and middle of the above picture.

It took about twenty minutes to reach the mine site, which is pretty overgrown. You've got to be extremely careful poking around off the trail. There's cables and pipes and rusty equipment scattered about, and it would be easy to fall into an open pit or old foundation if you're not paying attention. 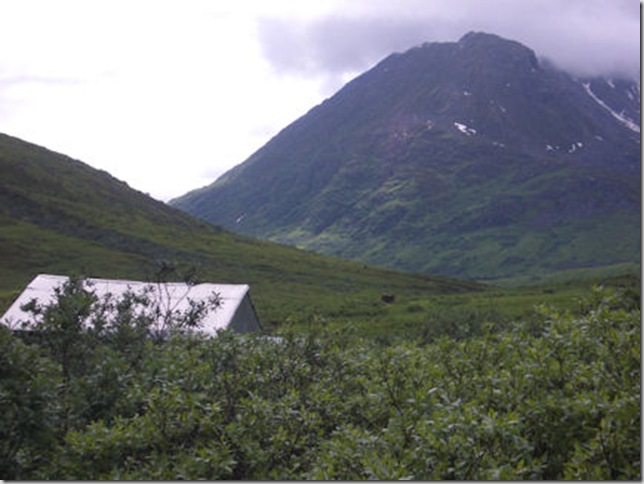 The valley is pretty damned remote, and while it's a beautiful and pleasant place this time of year, try to imagine living here in a mining camp in deep winter when the snow is fifteen feet deep and the winds are howling down off the glacier and the temperature rarely climbs above -40F. Now try to imagine doing that in the first decades of the last century (these mines operated up until the beginning of WWII or so) when all your supplies were packed in through the mountains on mule trains or primitive 4-wheel drive trucks. There are no trees up in these alpine valleys, heat came from coal fired stoves and the coal had to be packed in. Same for food and supplies. Some of the miners lived up here for years. No phones and only intermittent radio communications. No medical help. Hearty souls, those old miners.

Behind the mine the valley ends in a wall four thousand feet high. Above that is the glacier and the wreck site. 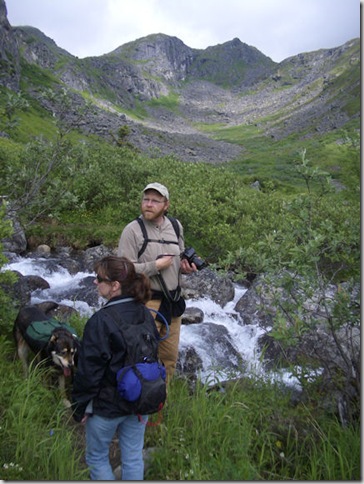 We figured we'd climb to the waterfall, which is about twelve hundred feet up a very steep trail. You can just the waterfall as a silver spot in the upper left, just above Beastly's head, in the below picture. 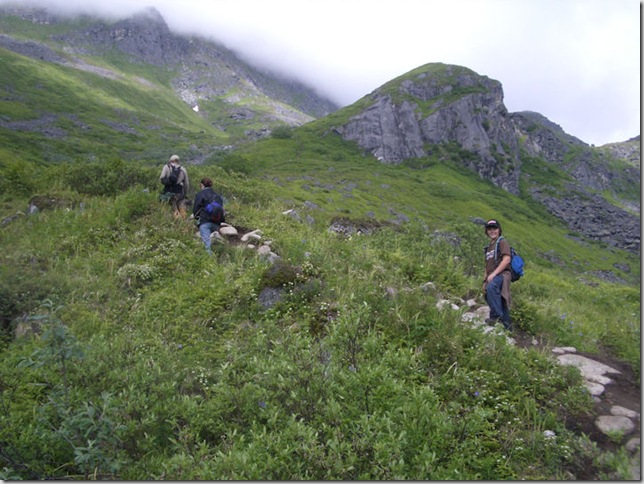 Above five hundred feet up, Beastly decided he'd gone far enough. His ankle was giving him grief and he didn't want to aggravate it any further. I heartily agreed as I had no desire to carry his big ass all the way back to the truck.

So we left him.

Actually Beastly mooched back down the trail to the mine, happily taking pictures, and we headed up the mountain. Now before anybody takes me to task for leaving a member of the hiking party alone on the trail, don't worry, we could both see each other from our respective positions. Beastly knows not to wander off the trail into the bush and to stay in the mining camp. Plus, there was a whole troop of Boy Scouts around if he needed help crossing the road or needed a beer or something.

We made it to waterfall in about twenty minutes. 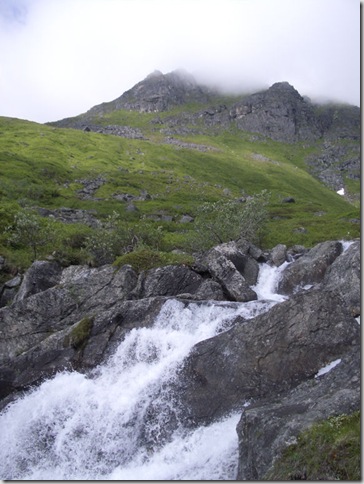 It doesn't look like much in the picture, but it's pretty dammed impressive in person. That water is falling from three thousand feet up, and it's moving. It's also cold as hell and temperatures in the area were a good ten degrees below the surrounding ambient because of it.

The view of the valley was spectacular.

The above panorama was stitched together from three shots taken with my Pentax S4 digital. What a great little camera. I put the camera in panorama mode and snapped three shots using the pan alignment function. I stitched them together using Corel's Paint Shop X2 layering function and I think it came out rather well.

We headed back down the mountain, picked Beastly up from the mining camp, and followed the trail back the truck. Round trip just under six miles according to my GPS.

All in all, a pretty good day.