Alaskan Themed Things From the Woodshop

I took the last couple of days off from posting because my shoulder is giving me merry hell and it hurts too much to sit for a long time in typing position.

So, instead of writing I spent the last couple of days in the shop, putting the finishing touches on a couple of projects. Something I could do without aggravating the shoulder.

The first item was done on commission. It's a salmon fillet knife, intended as a gift for an avid fisherman and outdoorsman.  The customer provided me with the knife blank, and asked if I could build a customized handle from Alaskan birch heartwood around it - the stand I did for free, just because I felt like it. 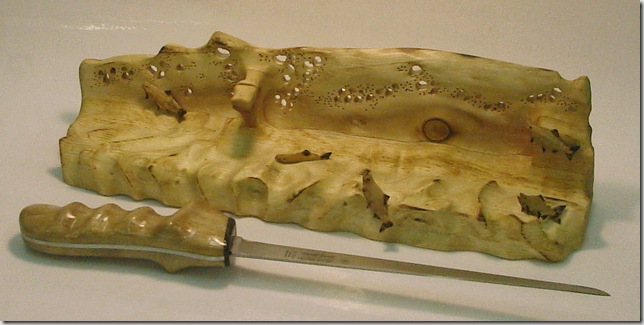 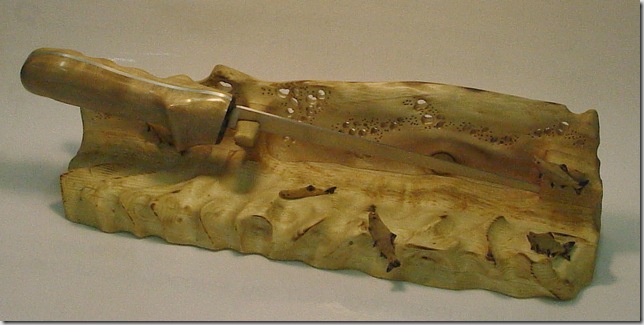 The blade is 12" high-carbon steel, with a half tang (e.g. the portion of the blade that extends into the handle is only about half the length of the handle itself).  The handle was sculpted from Alaskan birch heartwood with an African Congolese Rosewood (Wenge) blade guard accent piece (that black piece of wood that fronts the handle). I cut an aluminum frame to mount the blade, and then glued the wooden pieces to it using an extremely durable and long lasting two-part epoxy. Once the glue was dry and cured, about a day or so, I then sculpted the handle as a single piece including shaping the aluminum core.  This method essentially makes the blade and handle a single solid piece, which is a bit different from the usual method of attachment using brass or aluminum rivet posts (those little silver circles you see on most knife handles). I did this for a reason, while this knife is a beautiful piece and will probably end up as a display on an office shelf somewhere, it is fully functional as specified - which means that it could potentially end up covered in fish guts and dunked repeatedly in the river.  Using the epoxy method, and then sealing the entire handle in a plastic, jellied spar varnish ensured that the handle could take such abuse without damage or failure.  The handle is customized to a right handed grip, with knurled finger guides to ensure a good grip even if it is slippery with fish slime - which is dammed important as that blade is seriously sharp.

I made the stand from Alaskan Sitka spruce with sculpted salmon carved from birch burl.  I did that just because I felt that a display piece should have something suitable to display it on.  The idea of the stand is that it should evoke images of an Alaskan river filled with plump red salmon. I think it came out rather well.

The customer will have the recipient's name laser engraved on the blade.  He came by my shop last night to take a look - um, let's just say he is considering keeping the knife for himself.

And this next piece is an Alaskan heartwood bowl. 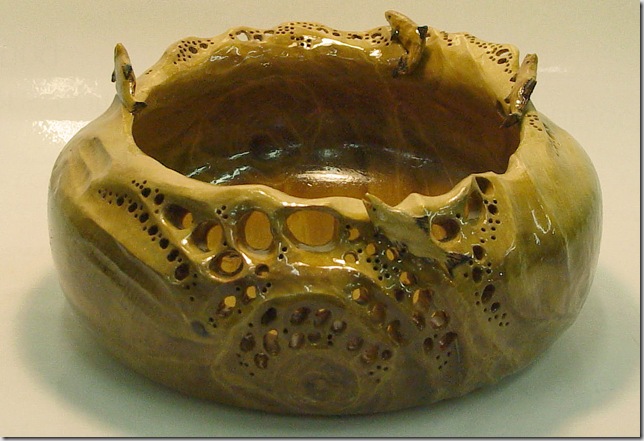 This piece is not for sale. I did this one for myself.  There's a contest coming up in a couple of months and every year the same folks win it. I've never entered before, but this year I intend to give them a run for their money.  This bowl was turned from Alaskan birch heartwood, then sculpted and filigreed to resemble foaming white water.  The rim is irregular, with a flared edge along the far side which I intended to look like a breaking wave. The salmon are carved from birch burl (the ones on the knife stand above were actually leftover from this project).  It's finished in a variety of oils and an high gloss spar varnish to enhance the wet water look.

Yeah, I'm pretty happy with it.  The usual contest winners have gotten lazy and they are in for a surprise this year, oh yes, they are.

Shoulder is feeling a bit better over all, but the pain is actually worse than yesterday.  This is usual for me, no worries, it'll be fine in a couple of days or so.  Age, and a lifetime of doing things to the joint that were not intended in the design - it catches up to you after a while.  Anyway, that's about all the typing I can stand for a while.