A few things from the woodshop

We've been a little busy in the shop this week.

Beastly has been turning bowls, mostly small stuff on the Jet Mini Lathe, but yesterday I made him do something a bit bigger: 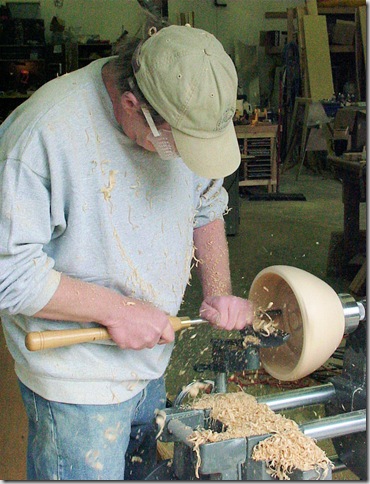 This was a large piece of wet birch heartwood when he started. Unbalanced and heavy, it damn near shook the lathe apart until he got it rough turned to round. He manage to break a tool rest and maybe his nose in the process - that's what turners consider a bad day, not because he might have broken his nose, but because he broke a tool. It's okay though, we had a replacement on hand and had the lathe fixed in minutes. The nose? Well, that has zero impact on shop operations so it's not my problem (Kidding, I'm kidding. Beastly breaking his nose is a regular occurrence, he doesn't get worked up over it). The end result is looking pretty spectacular this morning, however, as you can see in the above picture.

Me? Well, I turned a large bowl too. Then hosed up the finish work, which I have to remove today and redo. Sigh. Like broken noses, it happens.

I also completed a couple of displays for the Air Force - which I'm very happy with: 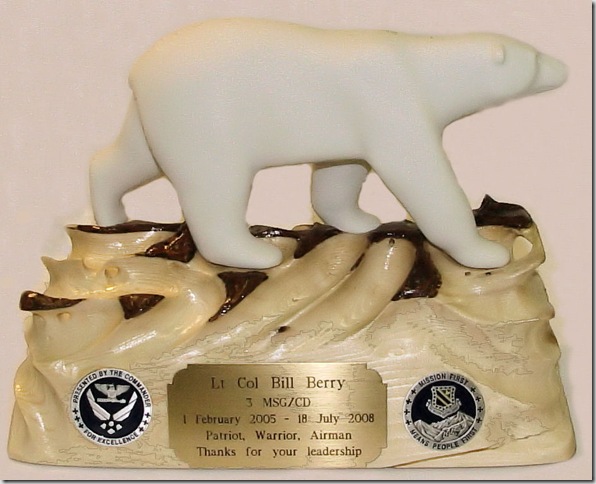 The bear is ceramic, I sculpted the base from Sitka Spruce and mounted the statue, coins, and the plaque. This is the third one I've done for the Air Force, and I've got an order for at least two more. These are turning out to be very popular going away gifts for departing Colonels. 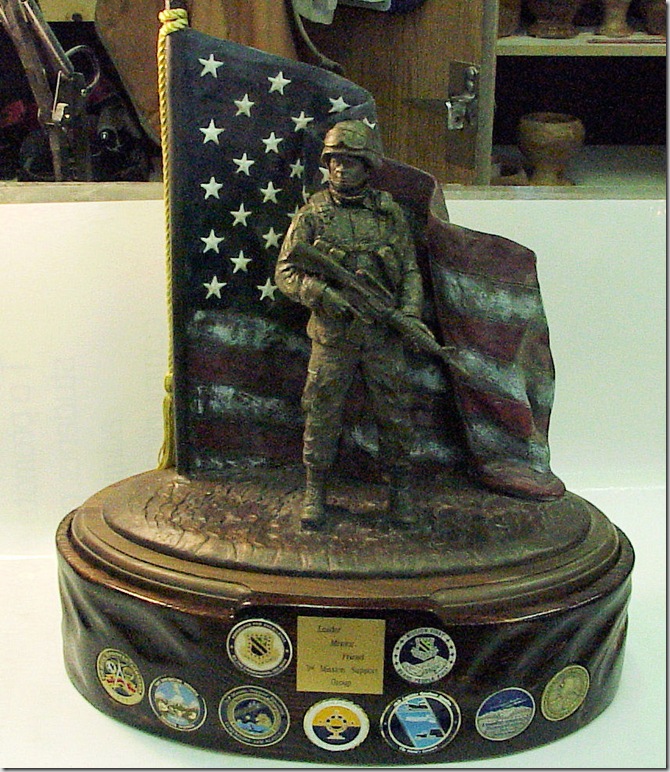 The soldier statue was a major effort. First, that statue is massive. It's about 18" tall and over a foot in diameter through the long axis. It's cast from bronze and weighs about seven pounds. Oof! I sculpted the base from a large piece of spruce, which I cut from the largest dried stock log I had on hand. Then I cut it to oval on the bandsaw. I cut a recess into the top so that the original wooden base would slide into it, merging the two pieces together. I would have liked to completely remove the original base, but there was just no way to do it without damaging the statue, so I incorporated it into the new base. Beastly helped me hold the base steady on the multi-function drillpress while I cut recesses for the coins - seriously, you want aggravation? Try cutting those coin slots - all varying size by the way - into an oval surface, all at uniform depth, equally spaced, and describing a cord of the oval equally around the front of the piece. Oh yeah, that was fun - fortunately both Beastly and I, being Navy vets, knew the proper sequence of cursing necessary for the job. I finished the base in a mahogany stain and poly-acrylic, then glued the statue and coins in place. The little brass plaque came with a self adhesive backing, so I just had to get it centered and level. The completed project weighs about twelve pounds, woohoo!

I also spent most of yesterday playing around with the Leigh dovetail jig, building a couple of wooden boxes with dovetail joint corners.

And now, I've got to get back out to the shop. Back in a bit.