We took the new Delorme GPS unit out for a test drive this weekend.

My son was over at a friend's house for the day, so my wife and I got a rare afternoon of hiking and exploring by ourselves. We went down to the Matanuska River and spent a couple of hours - and it was nice to be able to poke along the water without having to constantly keep an eye on the kid.

We left the truck at the Palmer River Park, and followed the trails through the campground down to the river bed, just above the bridge on the Old Glenn Highway. 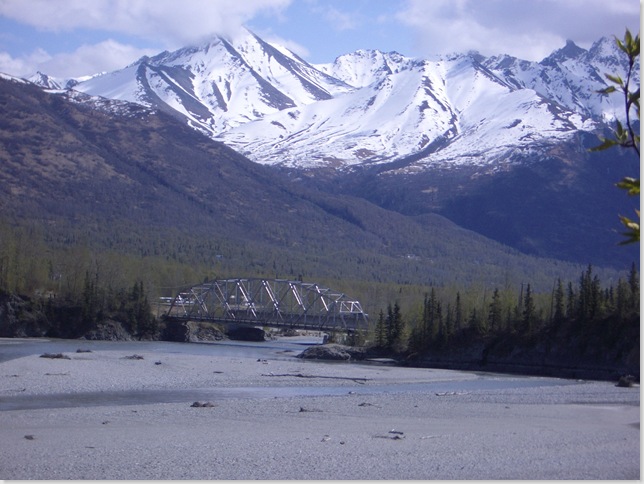 It was sunny and warm in the valley and we wandered along the river plain looking for cool rocks and driftwood as is our habit. And as always in Alaska, even the mundane scenery was fantastic. 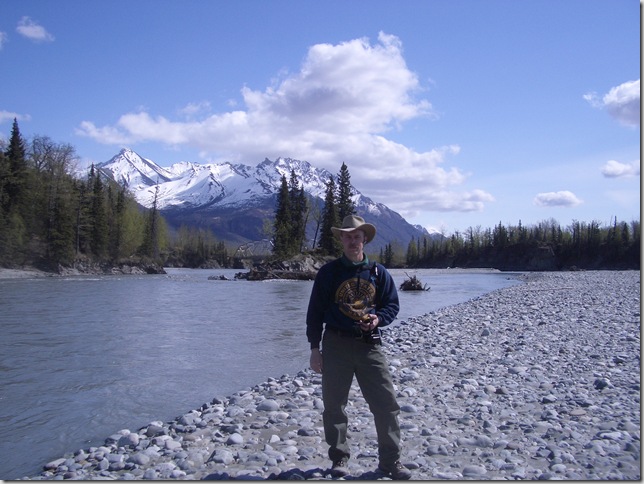 I have high resolution topographic maps of the entire region loaded in the PN-20, and before we left home I downloaded a bunch of geocache locations into it from the links on Google Earth. While my wife hunted for interesting rocks for the rock polisher, I wandered up and down the river bank playing with the GPS unit. It worked better than advertised and I was routinely locking onto a minimum of ten satellites and getting position fixes good to within a couple of feet. 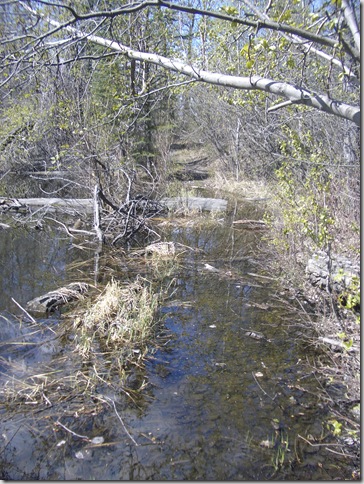 We walked a couple of miles up the river before getting to the first cache - which we couldn't find. Someone has either taken it, or its hiding place was too obscure for us. But the second one was right where the Delorme said it should be, and after a second or two of poking around my wife found it under a log. We noted our find in the log, took nothing and left nothing, and went inland following a trail. The path was a little, uh, damp in places from the spring runoff. Note: if you go hiking in Alaska, you're going to want good, waterproof hiking boots, just saying. 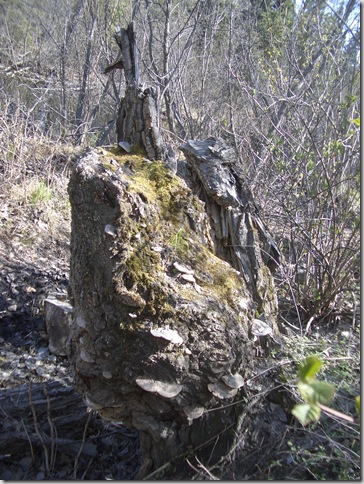 We somehow ended up behind the Palmer Municipal ball park, where a bunch of kids were playing Saturday afternoon little league. While working our way back down the hill, following the GPS back towards where we'd left the truck, I came across an old cottonwood tree stump. It's hard to tell from the picture, but that burl is about 6 feet in diameter. If only there had been some way for me to cut it off and haul all two tons of it back to the truck, imagine the bowls it would make.

All in all we walked about four miles and explored parts of our neighborhood that we hadn't seen before. It was a pretty good day.

Now, in the old days, especially back when I used wet-film cameras, I kept a notebook in my pocket and wrote down where and when I took each picture, but the Delorme PN-20 and TopoUSA 7.0 software package has a unique feature which I wanted to take advantage of. First I needed to make sure the camera's clock was set to the correct time and date in order to ensure the time stamp on each picture was correct. I normally use a Sony professional model D770, but for this hike I didn't want to lug it along and instead used my little Pentax Optio S4. The clock was way off, so I synced it to the GPS before taking any pictures. After the hike I downloaded the GPS track data to the TopoUSA software and then downloaded the Pentax's SD chip to the computer using the Vista media downloader. Then, using the GeoTagger function in TopoUSA, I synced the pictures to our recorded route on the map. Since the GPS unit records our position about once a second, it is easy for the software to determine exactly where I was standing when each picture was taken (providing that both the GPS and camera clocks are synced, hence the need for setting the camera's clock correctly. The GPS unit syncs its clock automatically to the global standard via the satellites). TopoUSA will then insert a thumbnail, an icon, or a hyperlink to the picture file at the correct position on the map. I tried it all three ways, and decided that I like the icon option best. 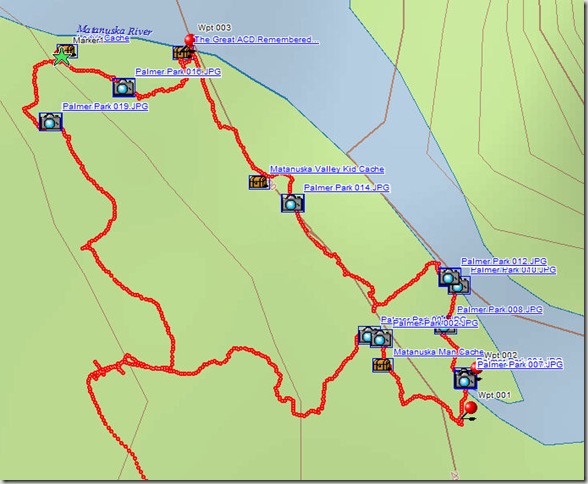 In the screenshot, the red track on the map is our route, and each camera icon is where I took a picture. Clicking on the icon opens the picture in the default viewer. Additionally, you can add notes to each picture on the map or in the picture's data file, or both. Since both my Pentax and the Sony record detailed information about each picture (e.g. the camera settings at the time of capture), I get far more information about each picture than I ever did with the old method of recording each photo by hand in a log book. Additionally, since I use Corel Photo Paint X2, if the pictures are photoshopped X2 will record any changes and stamp the photo with its version and program information - allowing me to look back years later and determine if any changes were made to the photo and be able to reconstruct the original exposure if necessary.

This is an extremely cool ability. A couple of years ago, I scanned into digital format hundreds of old Ektachrome slides and negatives from the 40's, 50's, and 60's that my mom had. After thousands of hours of photoshopping to correct for redshift, scratches, and general damage to the film, my mom spent hours trying to remember where and when each picture was taken, and who exactly those funny looking people were. With this system, I have all that data recorded almost automatically and a hundred years from now, or a thousand, somebody will be able to reconstruct exactly where and when my pictures were taken. Will anybody give a damn? I don't know, but it's there if they want it.

Off the top of my head, I can think of a hundred uses for this capability (I sure wish that I had it when I was on scouting missions in Iraq). As I said elsewhere, if you're looking for a really cool gadget, or you're a photographer, or you just want to be able to remember where the hell you were when you snapped those pictures on that family vacation, or you're engaged in an occupation that requires you to record details of a specific location and then be able to find it later (Nathan, I'm talking to you here), you couldn't ask for a better tool than the Delorme PN-20 and TopoUSA 7.0.

Email ThisBlogThis!Share to TwitterShare to FacebookShare to Pinterest
Labels: things I think are just plain cool, Things in Alaska