Soup, it's what's for dinner 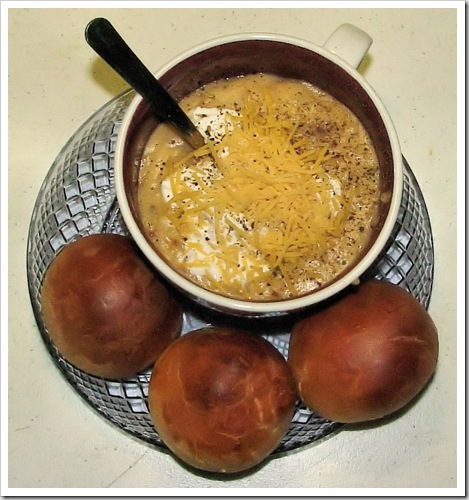 Well, it's what was for dinner yesterday, actually.

It's been a while since I published a recipe, so here, you get two for the price of one.

The soup is sour cream potato, and those round bread looking bouls next to it are what we refer to around here as Hansen Biscuits.

Nope, Hansen biscuits are not an Alaskan thing.

The mother of my good friend Jeff Hansen used to make these, she called them piggies - i.g. a variation of pigs-in-a-blanket. Jeff started making them for his friends, it got to be a thing. So, we now call them Hansen Biscuits.

They're simple: Turn three pounds of ground pork sausage into 2" in diameter round balls - you should get 30 of them for 3lbs of sausage. Me? I like Jimmy Dean Hot Pork Sausage.  Cook the sausage balls in a covered pan, turning occasionally, until cooked thoroughly. Remove from heat, drain on paper towels and put into the fridge until cold. This is important, the cooked sausage balls must be cold.  While waiting for the sausage to cool down, make bread dough using your favorite white or whole wheat recipe. Me? I prefer the White Bread 101 recipe from the King Arthur Flour Baker's Companion.  I make a double batch, which would normally make two loaves.  Two loaves is just about perfect for the 30 biscuits, so adjust your recipe accordingly.  Complete the first rise, usually about an hour, then punch the dough down and divide into as many pieces as you have sausage balls.  Wrap each cold sausage ball in dough, sealing it tightly - if the sausage balls aren't cold, the warm grease will prevent the dough from sticking/sealing up, then the bouls will split open during cooking and you'll have a mess.  Place each biscuit on a cooking tray well separated from its neighbor.  Me? I use parchment paper lined sheet trays, I get fifteen biscuits per tray. Two sheet trays fit perfectly into my oven.  Cover with plastic wrap and allow to complete the second rise - about an hour, depending on the recipe.  Brush with egg white and water mixture, and bake until golden brown.

Jeff serves his biscuits with chicken noodle soup and dill pickles - and we like them that way too. But yesterday it was cold and rainy, and that's more of a potato soup kind of day.

The soup is simple:

2 qts water, 1 good sized glob of Tones chicken base and four large potatoes cut into medium sized cubes in a large sauce pan. Bring to boil, reduce to simmer. 2 tablespoons chopped garlic, 1 cup chopped onion, 1 cup chopped celery sauteed in a tablespoon of olive oil until softened. Add a 1/4 cup of flour to the celery/onion mixture, toss or stir to coat, and saute until golden brown over medium heat. Add the saute mixture to the potatoes, stirring carefully so you don't break up the spuds. Add 1 1/2 cups fat free half and half. 1 pinch of salt, 1 tablespoon fresh chopped basil, dash ground pepper, 1 cup shredded smoked Tilamook cheddar cheese, 1 cup chopped ham, and 1/2 cup chopped cooked bacon. Simmer on low heat for 1/2 hour.  Add a dash of Worcestershire sauce, remove from heat. Serve with a generous dollop of sour cream and a handful of shredded Tilamook over the top.

Perfect for a rainy day.