I meant to do this a couple of days ago, but I've been swamped lately and the time just keeps slipping by.

I got a postcard from Anne in India on Saturday last. 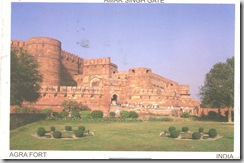 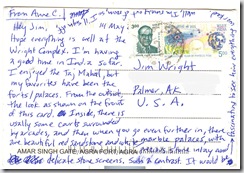 India, I've always wanted to go there, ever since I read Kipling as a kid, and especially The Man Who Would Be King. For me India will always be an exotic foreign land, full of mystery and strange magic, elephants and tigers, ancient temples and teeming cities ... and, well, tech support.

When I joined the Navy, all those years ago, one of the reasons was to see the world. I had a list of places I wanted to see. The black volcanic sand beaches of Iceland. The great markets of Istanbul and the Golden Horn. The Valley of the Kings and the Giza Plateau. Pompeii and Herculaneum. Gibraltar. Hong Kong. Singapore. The Straits of Malacca. The Galapagos Islands. The Panama Canal. The Serengeti and Kilimanjaro. Freemantle, Sidney, and the Great Barrier Reef. Tasmania. Masada. And India.

I made it almost everywhere on my list and many others places too - but somehow I never made it to India. I never set foot there, and it's unlikely that I will. I've been around the world and walked on every continent except Antarctica, but the closest I've gotten to India is sailing around the sub-continent's southern horn. I've seen the Indian Navy up close though, and they are excellent and professional sailors as only the descendents of a thousand years of seafarers can be.

Anyway, thanks, Anne, for thinking of me and for reminding me of India.

Update: I was still waiting for the coffee to brew when I typed the original post, so I was just a tad fuzzyheaded and forget two things:

1) I really, really like the stamp - International Physics Year with a picture of my favorite scientist, Ole' Albert himself.

2) Question, where is it that you always wanted to go, and why?