As noted in the previous post we spent yesterday in Anchorage at the Elmendorf Air Force Base Air Show.

The parking was every bit as bad as it usually is, and worse.

I swear to all that is holy, unless it has got wings bolted on it, the Air Force just doesn't have a clue. Seriously, a couple of drunken zombies with soup bowls over their heads could have organized the parking and traffic flow better than the troop of bumbling baboons in camouflage that were out there yesterday. Between the gate and the parking lot, a distance of about two miles, I counted exactly two security units directing traffic (well, if you want to call leaning against the hoods of their vehicles, smoking and shooting the shit directing traffic). And I had plenty of time to look around, as it took about 45 minutes to cover the distance. However, there were nine, nine, Senior Airmen in a large gaggle directing the parking of each individual vehicle (Actually, I believe the technical term for a group of airmen is called a clusterfuck, but I could be wrong here and I'm sure the rather large number of AF types who read this blog, Steve, Rick, Vince, my brother Mike to name a few, will correct me sooner or later). Based on my observation, they were highly specialized, one to direct forward movement, one to direct rearward, one for right, one for left, four to supervise, and one safety observer to ensure that the process was completed in accordance with AFOSH regulation. Additionally, there was a Tech Sergeant ripping around on a ATV, looking self important - what precisely his job was, I couldn't say. It became apparent almost immediately that there were no senior NCO's present, and as usual with the Air Force there wasn't a commissioned officer anywhere in sight (not that the presence of an officer would have made a difference, in as much as Air Force Officers don't actually give orders or take charge). Nobody was in charge of the process in any way shape or form. As I said, business as usual, however considering that they've only done this every single year for the last five decades you can understand if they are still working out the process.

After that, however, things improved.

Because, once you left the parking lot, well, there were airplanes involved, and that the Air Force does very well indeed.

The weather wasn't great, low hanging clouds and intermittent rain and there was a chill wind, but overall it was a pretty good day for Anchorage, Alaska. We ran into some friends, and my son and his pal crawled through every cockpit on the flight line. Here's my son sitting behind the controls of an Army H-60 Blackhawk. 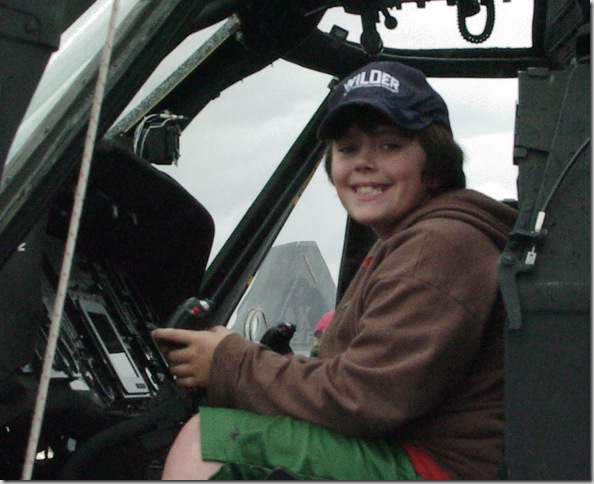 Beastly and I wandered about, we've both ridden in or jumped out of just about everything the military has and frankly waiting in line to see the inside of a C-130 delivery truck wasn't something I felt like doing (Seriously, once you've ridden for an interminable thirteen or fourteen hours in the back of one of those things, vibrating your fillings out like the bitch on the back of a one-lung Harley, strapped to a mesh parachute seat designed by Torquemada himself, breathing hydraulic fumes and freezing your ass off in the subzero cargo box they call a cabin, the romance is pretty much gone forever).

We watched the acrobatic air show, and the pilots were impressive as hell. Then there was about a twenty minute demonstration by a vintage WWII P-51 Mustang, still an exceptionally incredible aircraft even 60 years after they stopped making them. Then it was time for the F-22 Raptor demonstration. Personally, I think this aircraft is a boondoggle of major proportions, but it sure is cool - and the single most deadly and amazing aircraft ever built. Here's a montage of stills from Beastly's camera as it zoomed past us and opened it's weapons bay. 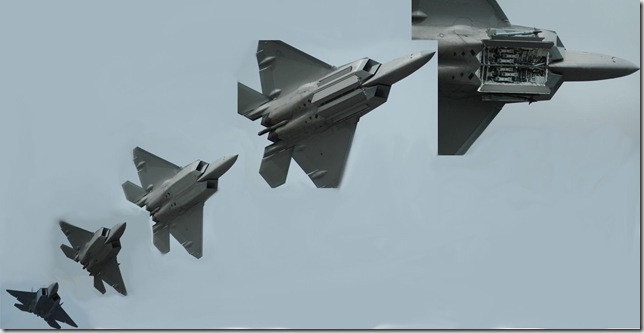 And then the final bit where the Mustang and the Raptor roared past in formation. It was weird, like one of those comic book scifi stories where the WWII patrol plane encounters a foo fighter. 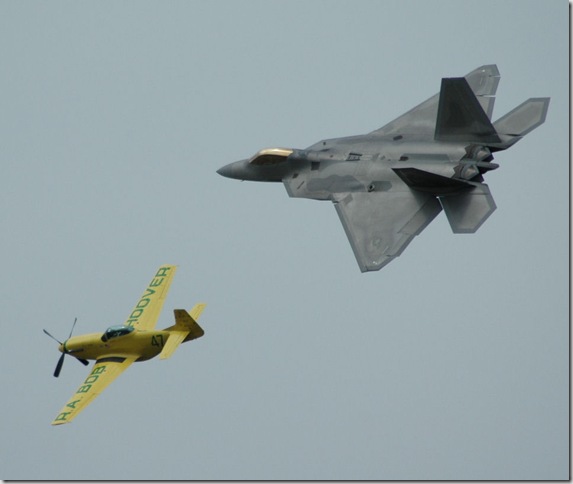 Then we settled down in our camp chairs to watch the Thunderbirds. The Thunderbirds are OK, but they sure as hell aren't the Blue Angles. Personally I was more fascinated by the vintage Grumman Widgeon seaplane behind my wife. 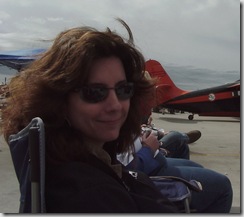 Beastly disappeared, and eventually returned with hot dogs. And all was right with the world for a while.

Then this guy showed up. Folks, we need a law that prevents people from going out in public wearing their pajama bottoms. Be grateful that I didn't get a picture of the front of this guy, seriously, you really don't want to know - let's just say that his PJ's didn't come with a zipper and leave it at that. 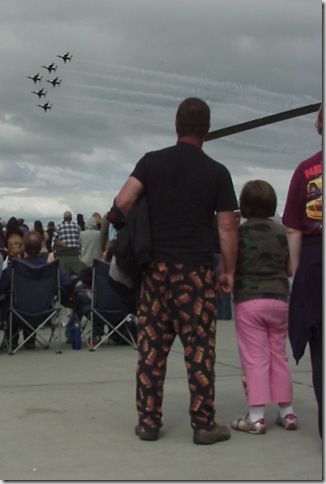 And after that, well, it was time to return to the parking lot.

And if you thought getting in was a disorganized nightmare - you should have tried getting off base. Seriously, folks, drunken zombies with soup bowls on their heads, really.

Anyway, we had fun despite the parking and the pajama issues.

What did you all do with your weekend?