Death from the Sky, Part II

As usual, Beastly and I were turning yesterday.

I had finished a large piece the day before, and Beastly was just finishing up a bowl he has been working on for several days: 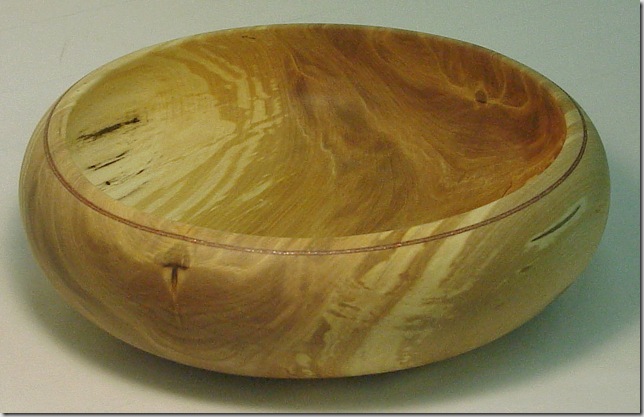 That's a copper inlay around the rim. Pretty dammed cool, especially for only his second time turning Alaskan green birch heartwood (Beastly is an experienced wood turner, but green birch turns far differently from the exotic hardwoods he's used to). It's available if anybody is interested.

We had the front of the shop open and I stepped outside with the chainsaw to cut some more blanks from the log stock. I made a couple of cuts, then turned the saw off in order to adjust the log on the cutting stand - and I kept hearing something behind me. Beastly was inside the shop, so it wasn't him.

Moose? No, the dog was laying in the sun, most unconcerned.

Everything was suddenly very quiet. The spruce grouse who usually trill and chirp all day from the tree branches were silent. Predators? Wolves or bears? No, the dog wasn't even sniffing the air, and she'd sure as hell know if something dangerous was about.

I looked around. Nothing. Maybe it was my imagination.

I picked up the saw - and the strange noise came again. Hmmm.

I looked around, again. Still nothing.

Then I looked up. 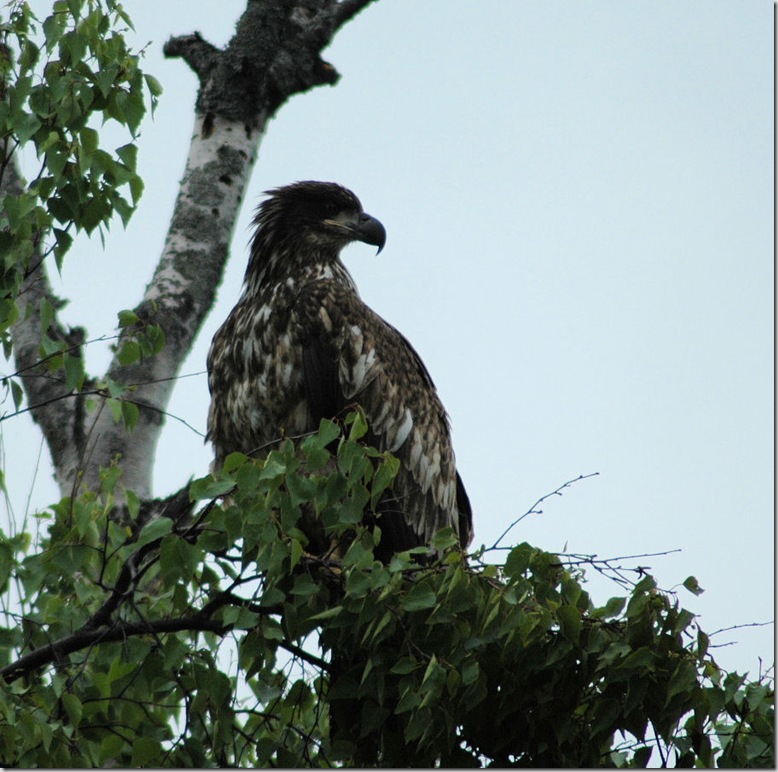 That's a young Bald Eagle, probably no more than a year or so old. He's still got the speckled plumage of a youngster, obviously. Young or not, he was big. His wingspan was easily six feet. He was perched about thirty feet up, in the birch tree between the shop and the house, eyeballing all of us potential food items below. He must have decided that Beastly, the Dog, and I were too big to cart away, but one of the idiot cats was in the sunroom window and Baldy was giving him the long hard stare. You remember what happened the last time cats and eagles mixed it up around my house, right? Fortunately for my wallet the cats remained safely behind glass this time.

However, I do have new neighbors. They have a little dog. A little yappy ball of fluff that resembles nothing so much as a tribble with a bad attitude. I think it's a Pekinese, but I'm not sure. It mostly looks like an animated mop head with a pair of beady eyes glued on. The whole damned dog, hair and all, can't weigh more than a pound or so - perfect snack size so to speak. Needless to say, the little puffball has no sense whatsoever and was roaming unconcernedly about about the yard, yapping spastically and sniffing the flowers.

Beastly and I began to speculate just how long fluffy had to live.

Beastly got out his Nikon and snapped a few shots, including the one above (He took that shot from about 60 feet away, against a glaring overcast sky. You've just got to love Nikon cameras). 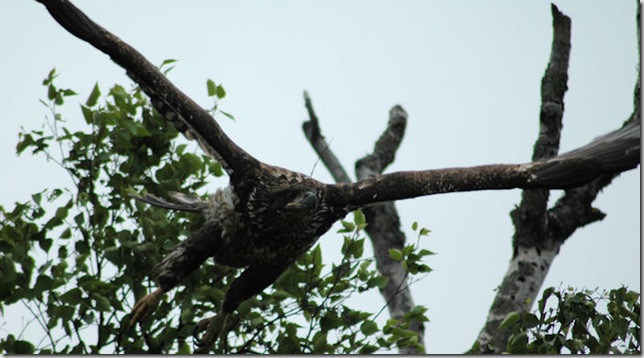 Baldy kept turning his head back and forth, and it was obvious that he was triangulating the position of that irritating yapping noise. Suddenly, he spread his enormous wings and dropped like a stone from his perch.

Belatedly, we wondered if maybe we should do something.

Fluffy made a frightened Cheap! and scampered backward like a supercharged hamster ... and escaped to safety under the neighbor's porch. Goddamnit! So much for a National Geographic moment.

Baldy glided away, disappointed, hungry, and in search of other unattended pets.

Life in Alaska can be hard for little fluffballs. He's out there again this morning, growling at the flowers like a demented ewok and snapping happily at the mosquitos. Not once has he looked up.

And he really, really should. Because, overhead, the eagles are circling and the grouse have grown silent again.

It would appear that Baldy went for help.

Really, it's only a matter of time.

Email ThisBlogThis!Share to TwitterShare to FacebookShare to Pinterest
Labels: Things about cats, Things that have to do with Alaska