Since it was nice out today and my shoulder was feeling a wee bit better, we thought we'd head up to Hatcher's Pass, which is about fifteen minutes from our house, and give the kid and the dog some exercise.

It was a little windy, but not too bad. About 20F, which is unusually warm this time of year. Plenty of snow. Lot's of snowboarders and sledders about.

This is my son "catchin' some air" as the kids say. Right now he's eleven and this is about as much air as he can catch - we're saving up for the hospital bills when he's a teenager. Jumper enjoyed the day, even though I forgot to bring her boots. She gets ice and snow caught between her toes unless she's booted up, but today she didn't seem to have much trouble. 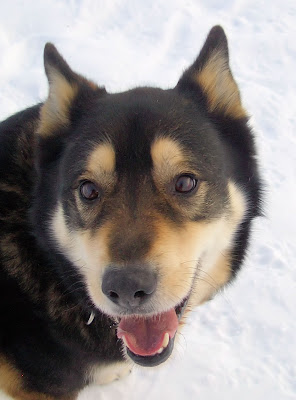 At first glance it looks like the snow was really deep since Becky had her entire left left leg buried to the hip - it's an illusion, she's just really, really short.

Afterward, on the way home, we diverted to Wasilla for Mexican food.

Hope you guys enjoyed the first day of 2008. Well, all of you except Shawn Powers, who as we all know spent the entire day rebuilding his server - which is probably for the best, since the last time he went outside he fell into a river.
Posted by Jim Wright at 8:28 PM