Death from the sky!

As cats go, he's right down there on the bottom rung of the ole' feline scratchin' post. You wouldn't want to know him. He is dumb as a catnip mouse. He has a rotten disposition, it would be a charity to say his personality is a lot like a bent shitcan. He is seriously unaffectionate, yet he is pathetically needy - a living contradiction in fur. He is pointy on five ends. He smells funny, like dead fish and old gym shoes. He sheds like you would not believe. And he is patently psychotic, of the twitchy voices-in-my-head-are-telling-me-to-kill-you variety.

This is he. And yes, his eyes really are lit from within by a hellish yellow light. 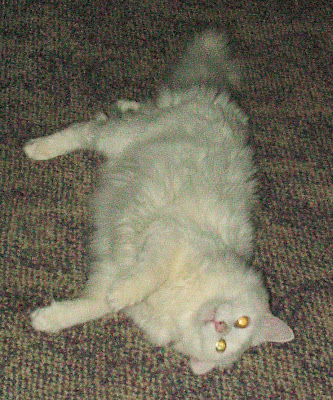 Technically his name is Sitka. But since he doesn't answer to anything except that one voice in his head that sounds like Lambchop quoting Mein Kampf, we call him whatever we feel like, which is usually The White One or as I may have mentioned - Stupid.

But for quite a while we called him Pegleg, and that brings me to an amusing Alaskan story.

See, Stupid and his brother, Tubby (AKA Kenai, The Grey One, or more often The Fat One) are house cats. They've still got their claws, because we felt funny about cutting off their toes, but let's just say that when I use the pronouns 'he' or 'his' - well, it's just a courtesy. They really have no reason therefore to go out prowling the neighborhood, if you get my drift. And there's another reason we don't let them out - Alaska is a dangerous place for small silly creatures, especially small silly stupid creatures.

Unfortunately, keeping a pair of cats contained is a lot like herding, um, well cats.

So, about two years ago, Stupid and Tubby decided to go for a walk. A door got left open and having no damn sense whatsoever, they slipped out. It took a while to realize that they were missing, we figure that they'd been outside for about an hour or so when I suddenly detected a marked decrease in the levels of free floating cat hair, found the open door, and started looking for them.

Imagine it: two medium sized cats, one grey, one white, lost somewhere in Alaska - Yeah, a mountainous, heavily forested and glaciated region fully as large as the rest of the United States west of the Mississippi (Well, OK, I reasoned that I could safely rule out Kodiak, The Komandorski and Aleutian Islands because cats don't like water and therefore were unlikely to swim for Russia. Still, the reminding search area was pretty good sized, just saying).

OK, not a problem. I knew just what to do.

I went back inside and shut the door, got a beer and went back to surfing the internet. Hell, maybe they would swim for Asia. Screw it, says I to myself (gleefully), let the Rooskies deal with the little bastards, cats are basically communists anyway.

Alas, it was not to be - the kid noticed them missing. The wailing and gnashing of teeth started to get on my nerves. Sigh.

Back outside. Around the house and around the shop I searched. Through the woods (and over the bridge to Grandma's house, ho, aren't you clever). Calling. Their. Names. Yep, perhaps we're calling the wrong creature stupid here. Eventually I found them, filthy and hissing under the back porch. I opened the side door, the one that leads into the attached garage, got a broom, and attempted to (wait for it) herd the cats into the garage. Tubby went, no problem, but Stupid here refused to do anything other than hunker down in the furthest dark reaches under the porch and spit at me.

Nothing for it then. I got down on hands and knees and slowly reached under the porch with my bad arm (because I needed the good one to hold me up, do I have to explain everything?), attempting to get a hold of him. About then, there came a loud sobbing noise from behind me - my son, who had crept up behind me and was attempting to help by suddenly yelling 'What are we gonna do!" over and over and then bursting into hysterical tears. The noise startled both the cat and I. I reacted by falling forward and banging my head on the porch. The cat reacted by attempting to bite my fucking thumb off. Between hitting my head on the porch and the searing pain in my hand, I thought for a moment that I'd been bit by a wolverine. Not one of my finer moments, and I'm afraid the resulting swearing killed all of the grass in the back yard and caused a large gray squirrel to fall stunned from it's perch in a Sikta spruce tree 30 yards away.

Then, and only then, did Stupid dash out from under the porch and into the garage.

Where I left him for a good while. It was either that or put a bullet into his fuzzy ass. And if I wasn't bleeding so much I would have. Instead I spent the next half hour with the medicine chest, pouring betadine into the wounds (yeah, cat slobbler in deep puncture wounds, shudder).

Eventually I let him into the house and he went off to compare tales of exploration with his retarded sibbling.

My wife came home. I told her the story. She took one look at my mangled hand, sniffed - and went to check if the cat was OK. It wasn't, something was wrong with a front leg. I was all for letting Stupid suffer for a day or so (you know, as a lesson, not to be cruel [OK, maybe just a little cruel]). Don't worry, Stonekettle Station is not a democracy and I wouldn't get a vote even if it was. Off to the vet. Guess what? Broken leg, oh and not just broken, shattered. Along with various cuts, scraps, and missing claws.

Hot damn, says I to myself, I'll get my pistol.

Did you know that they can fix a shattered cat leg? Apparently all you have to do is wrap it in a dozen hundred dollar bills for about six months (just as a point of reference, a .22cal long rifle cartridge costs about 9 cents). So, the cat ended up sedated, X-rayed, pinned, casted, and collared with a huge floppy blue apron-like thing to keep it from eating the cast. White cat, huge white stiff cast, giant blue floppy collar - glue a red rubber nose on him and he would have been the spitting and hissing image of Bozo the Clown.

So what happened? Bald Eagles, that's what. Unfortunately for me, clumsy and incompetent bald eagles. Damn birds.

Small, fuzzy, stupid, and outside - in Alaska, that means you're food.

We have hardwood floors. For the next six months, Stupid would stump around the house, banging his cast on the floor, like Ahab pacing the quarterdeck of the doomed whaler Pequod - hence the appellation Pegleg.

He would often sit in the windows of the sunroom and glare at the eagles circling outside.

Eventually he got the cast off and is just fine as only a crazy, psychotic cat who cost us $1200 can be. And he has never attempted to go outside again.


But, Jim, I hear you say, you said this was an amusing Alaskan story. We're not amused (OK, we were a little amused at that part where you got mauled by a wolverine, but we were expecting more).


Well, yeah. I left something out. See, we have this friend, an old and dear friend, and he often sends us something cool and different for Christmas. This year it was a plaster Bald Eagle, nearly full sized, designed to hang on the wall.

The cat took one look as it came out of the box on Christmas morning, hissed and ran away. I manfully resisted the urge to chase him around the house, holding the eagle like a kid playing 'airplane' and making screaming raptor noises. I expect serious positive karma credits for this, because at that moment my hand began to hurt in remembered pain.

I hung it in the sunroom, it looks like this (sort of a cat's eye view, so to speak): 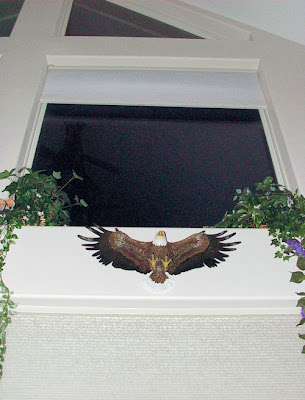 Our friend was not aware of the cat's history with death falling from the sky. The irony is sweet sweet justice (about $1200 worth by my estimate). Now, we're even.

See, I said it was an amusing story. Notice I didn't say who it would amuse. The cat is not pleased - and this amuses me.

Now, if you'll excuse me, I need to go make sure we have enough betadine and bandaids.

Death From the Sky, Part II
The Further Adventures of Stupid
Manly Blogging Thursday with ShopKat
Posted by Jim Wright at 10:29 PM

Email ThisBlogThis!Share to TwitterShare to FacebookShare to Pinterest
Labels: Things about cats, Things that amuse me