Latest from the Shop: Birdhouses

Update: All the birdhouses are sold.  More will be available shortly.

Between the Microsoft Malfunction and the fact that I was so dog tired last night, I didn’t get around to it until today. You understand.

As I mentioned previously, birdhouses are a fun project on the lathe.

They’re fairly easy, depending on how fancy you make them. They are a good way to practice turning skills, both basic and advanced skew work (the skew being the hardest of the lathe techniques to master, at least in my not so humble opinion), spindle turning, and face turning. And they are a good way to introduce kids to the lathe.

I start with the wood, of course. 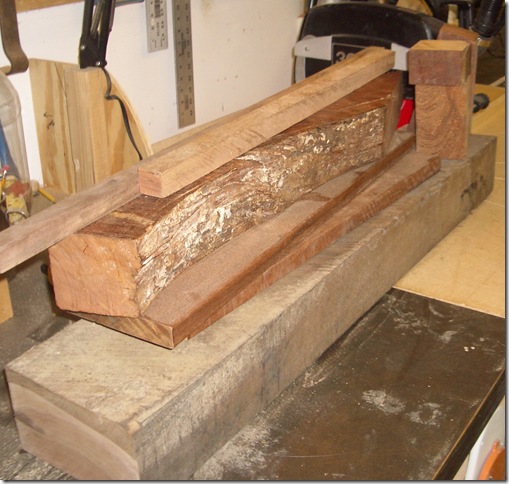 You can use whatever you’ve got laying around. That’s a large 4” thick slab of American walnut, some Brazilian rosewood, tigerwood, babinga, bloodwood, and some mahogany.  None of it looks like much, but it cleans up real nice. Trust me.

I cut the wood into 4”x4” pieces, six to eight inches long. Drill a 1” hole with a Forstner bit in the middle of one side (this will become the opening, the door, in the front of the birdhouse) on the drill press – it’s a whole lot easier to hold the blank steady on the press when it’s still a rectangle. Then I spindle mount the blank on the lathe between a spur drive (a spike with a ring of teeth around it, that allows the motor to turn the blank) and a live center (a pivot inside a bearing that supports the non-drive end of the turning) - and rough turn it to a cylinder.  I cut a dovetail on what will be the bottom end so that I can securely mount it in a heavy duty dovetail chuck (that shiny silver jobber in the picture, sort of like the Terminator’s oven mitt).

Like so: (note for you turners: the live center in the right hand picture is only there temporarily to ensue that I get the blank exactly centered in the chuck before cranking it down tight): 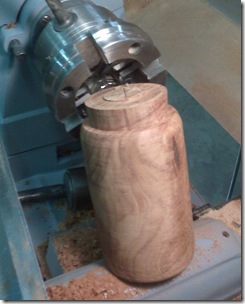 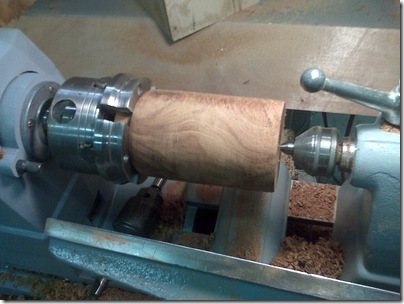 I then core out the middle of the blank using a large Forstner bit mounted in the tailstock: 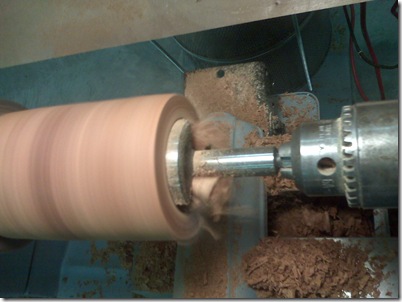 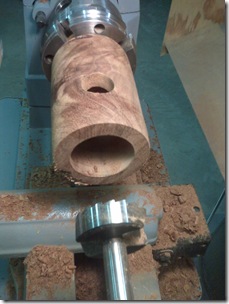 You can already see in the above pictures that the wood is pretty spectacular. And it should be, it’s Amboyna.  Amboyna comes from the Narra tree, Pterocarpus Indicus, which grows in Southeast Asia – with the most prized trees growing on the Andaman Islands in the Bay of Bengal. The wood is extremely rare and very, very expensive with some (burled) cuts costing as much as $500/board foot. Wood like that is usually used for master crafted musical instruments.

This isn’t one of those pieces.

It’s a straight non-burled chunk I got out of a cast-off bin along with some other odd sized pieces.  It was cracked and split, but enough remained to make a decent little project like a birdhouse out of – a really expensive birdhouse. Whatever bird takes up residence in this house is going to be the cock of the walk, just saying.

Next I reverse mount the piece on a friction chuck – which is a fancy way of saying that I push it firmly onto a wooden block mounted in the chuck: 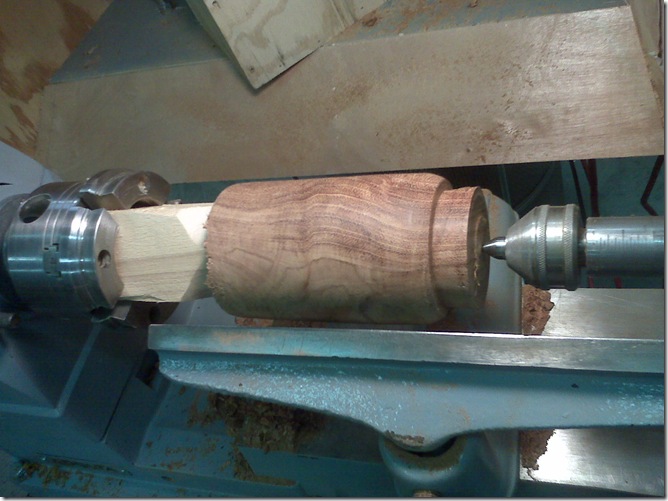 Then I start shaping it with a gouge and skew.  Usually I have no idea what the final shape will look like. 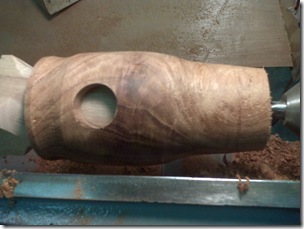 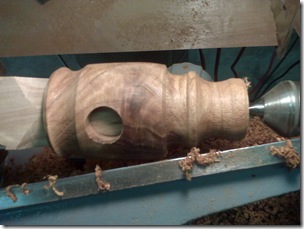 So, you know, you don’t ruin a really expensive and unique piece of wood. 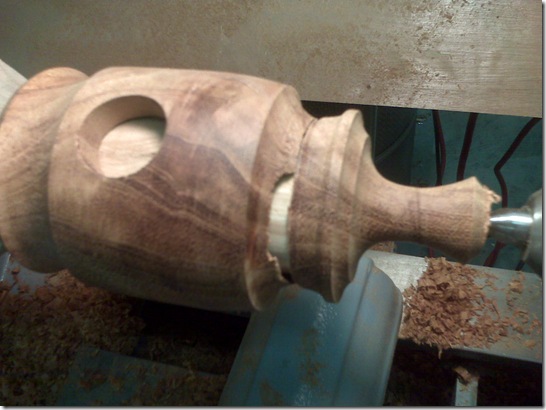 I misjudged by about a millimeter. 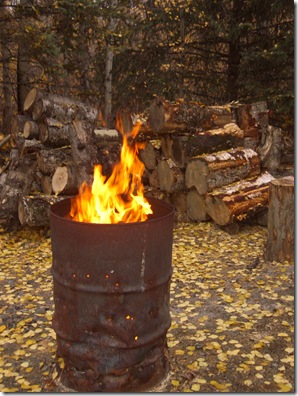 No way I was throwing out that piece of wood. In addition to being unique, spectacular, and – did I mention? – expensive, it was an ever lovin’ bitch to turn. The wood is incredibly dense and hard and difficult.

Contrary, I think is the word I’m looking for here, contrary.

So, I cut off the bottom and glued in a piece of Brazilian rosewood – which I thought was a nice compliment, color wise, and is about the same density. Then I glued the finial back on: 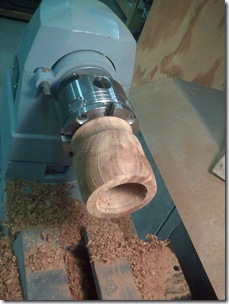 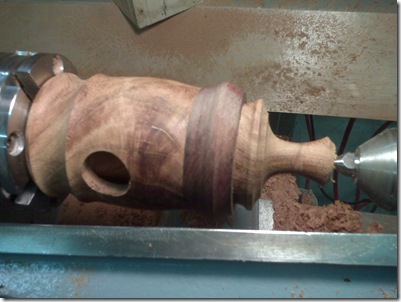 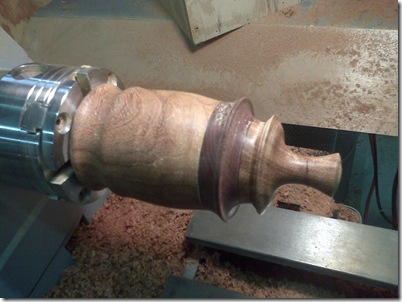 Next I turn the perches.  Those are about the size of a matchstick.

When I mentioned birdhouses in the last post, I got an email from a guy claiming to be an “old school” turner. He chided me for saying I turned the perches on my Delta 46-525. He thought I might be exaggerating. The 525 is a fairly big lathe, designed for industrial shops – Old School suggested that I was really turning those perches on a mini lathe.  Why would I exaggerate about such things? Old School didn’t say, but I took him to mean that I was fibbing in order to impress Saw Dust Groupies, you know, that band of hot chicks who follow middle aged wood turners around hoping to sleep with them and bear their children.  Well, the chicks and the fame and glory.

For the record, I really do turn the little bitty perches on the 525. 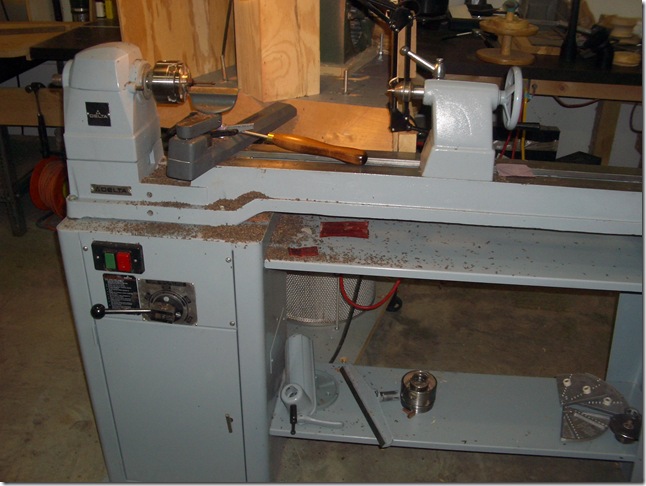 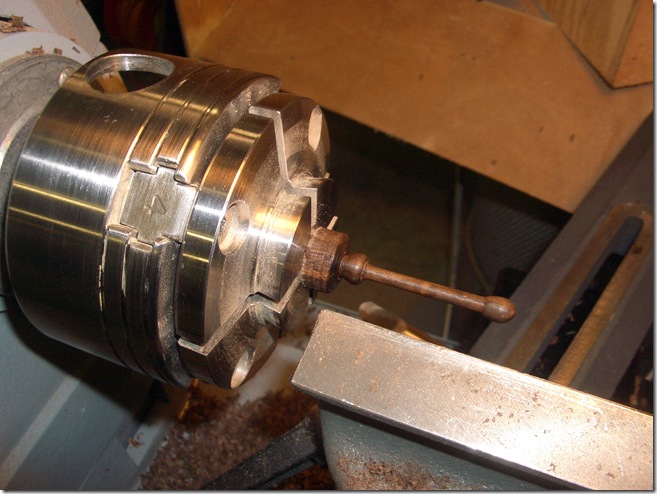 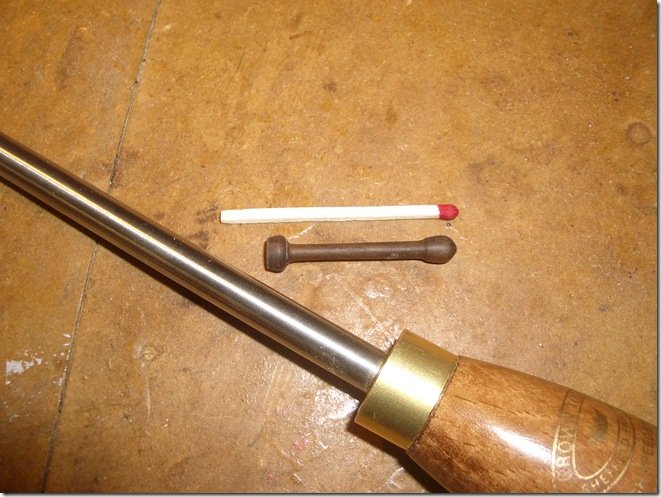 I never went to the old school, I didn’t know I couldn’t. Sorry.

The caps get turned from whatever contrasting wood I have on hand, in this case birch burl, rosewood, and tigerwood. 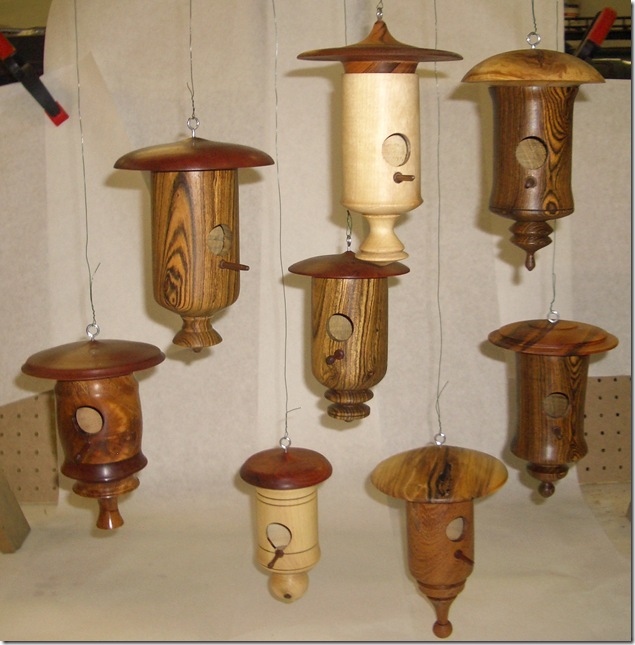 Remember the Amboyna? Here it is with a cap of and perch of Brazilian rosewood, finished in walnut oil: 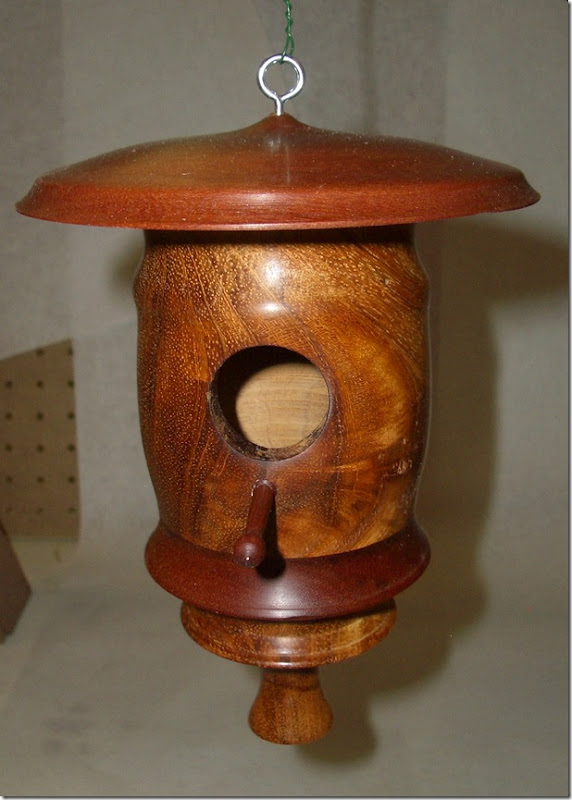 Pretty, isn’t it? The picture doesn’t do it justice at all. The wood is amazing, I really wish I had more of it.

This one is not for sale. I’m sending it to my Dad. He’s an avid birdwatcher and my folks’ backyard is filled with birdhouses and feeders. I think he’ll like it.

This next one is also not for sale. Or rather it’s already been sold, this one is going to Stonekettle Station regular and UCFer, Janiece. It’s South American Bocate, a yellow and black striped wood taken from the Cordia tree. It’s a dense and very fragrant fruitwood. Capped with Brazilian Rosewood and finished in walnut oil. 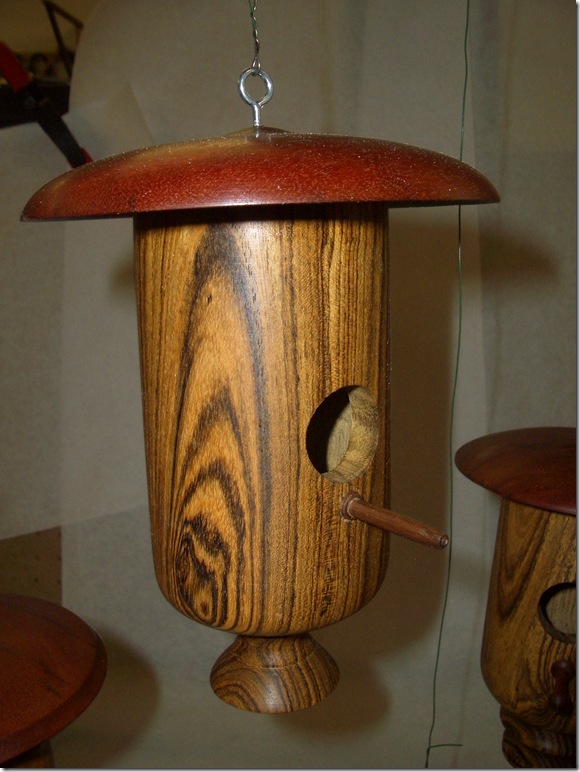 The following pieces are for sale.  Each one is numbered. There are six of them. First come, first served, note in the comments section which one you want by number. Again first person to comment gets the piece. One each. If they don’t all go, you may have two or more. I’ll let you know when.

I know, I know. Different time zones and such, unfair. Yep. I wish it were different, but life is sometimes cruel in the willy nilly wild and woolly world of wood turned birdhouses.  Besides, I’ll be making more shortly. Please, no pushing, no shoving, no throwing of panties on the stage.

(Snark aside – I will have more available soon, probably next weekend)

Prices are set by the cost of the wood.

Shipping is $10 for all pieces – which is a bargain from Alaska. Shipping will be via USPS, unless you specify otherwise. And otherwise will cost you more.

The body is birch, the cap is cherry, with tigerwood inlay. 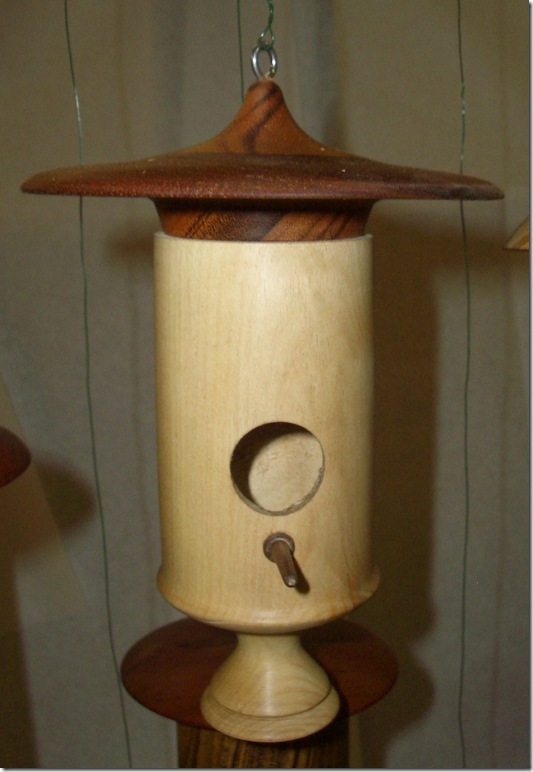 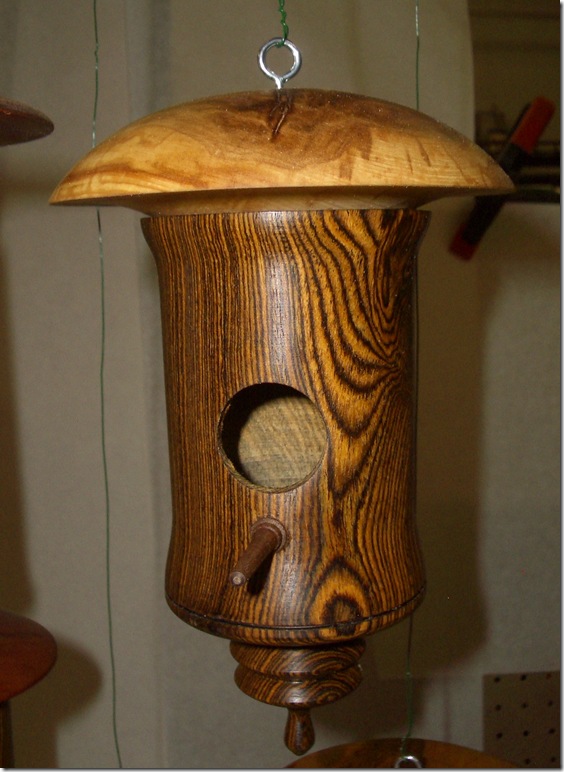 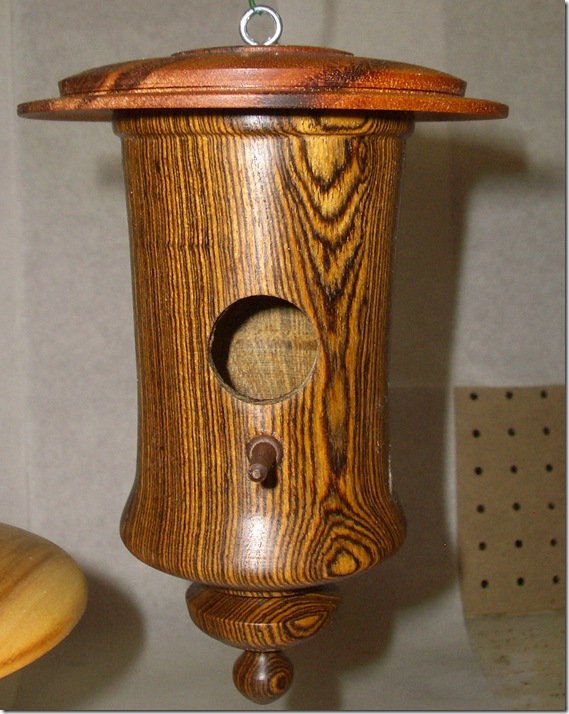 Honestly, I have no idea what the body of this piece is made out of.  I got the wood out of the turning blank bin from a hardwood supplier in Anchorage. It came in with a consignment of odd pieces from South America but nobody had any idea what it was. Neither do I.  My good friend and regular reader, fellow wood turner and expert of exotic hardwoods, Beastly, might know.  If he figures it out, I’ll make an update.

It’s Orange Agate, a wood cut from the jungles of Peru. It is hard as a rock, fragrant and quite beautiful with amazing grain and figure.

(Thanks to Beastly for identifying it). 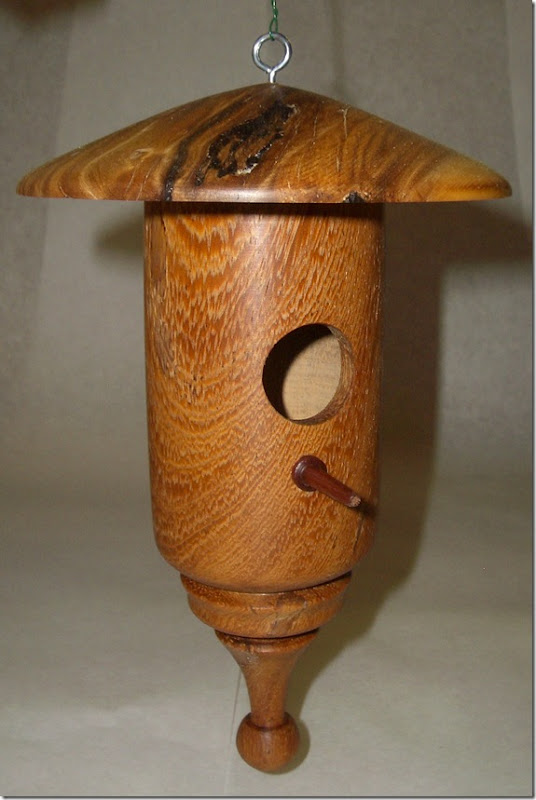 I really like this one.  I like the contrast between the woods. This is a small house, with a teardrop shaped door. Just because I felt like experimenting with door shapes. In the future I may do ovals and other teardrops. 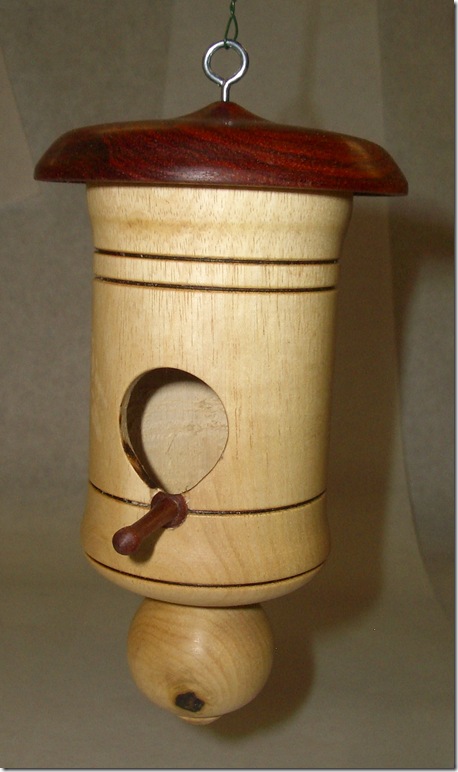 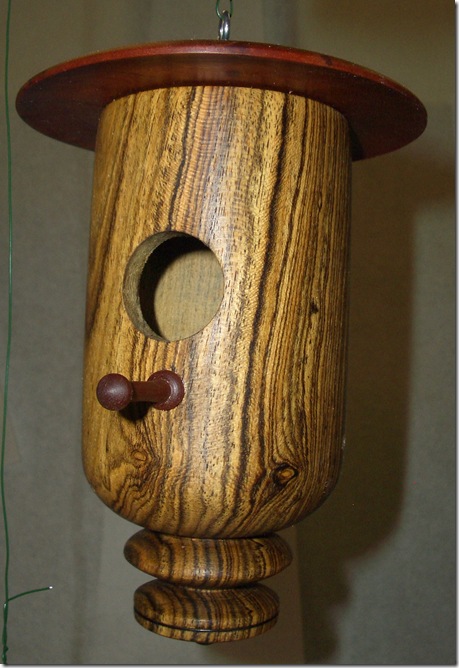 All the birdhouses are finished in walnut oil – a non-toxic, bird safe natural oil. The houses are decorative, however they are suitable for hanging outdoors and for use by nesting small birds – BUT they will age and weather over time, unless you oil them once a season.  Additionally, NOTE: They cannot be opened for cleaning – I’m working on a design that will allow you to remove the cap for cleaning, but I’m not there yet. If you need to clean these, you’ll have to pull the old nest out in pieces through the opening with a pair of needle nosed pliers. It’s perfectly doable and not really a problem, I just like you to know what you’re buying up front.

As always, I prefer payment via Paypal, but I’ll consider other methods as long as we work it out via email first.