We’re A Family of Geeks

For the next three weeks we’re going to be on the road.

In the air too.

We’re off to visit family.  First in Pensacola, Florida, and then up to Grand Rapids, Michigan.  I cannot even begin to emphasize how little it thrills me when I regard all that time in the hands of the commercial airlines and the sadistic incompetent jackasses of the Transportation Security Administration.

You may expect ranting from the airports and various hotspots as we make our way through the bureaucratic dystopian nightmare that is modern air travel in the United States.

We’re traveling as lightly as possible. Despite the horror we Alaskans feel at the thought of searing Florida panhandle temperatures and suffocating southern Michigan humidity in June, the advantage of travelling at this time of year is that we don’t need three different wardrobes or heavy clothes.

Which should leave more room in our luggage for technology.

I’ll be carrying my trusty Gateway Tablet. With the extended-life battery it’s heavy, but I like the 7+ hours of operation I get out of it and I’m willing to suffer the extra weight. I also have a bunch of movies and audio books loaded on my ZEN – so unless the guy next to me has swine flu, I ought to survive the flight OK.

However, My wife’s laptop has been dying for a while now and we’ve been meaning to replace it.  She’s hated that machine pretty much from the day we bought it anyway – one of those, it looked good in the store deals. She’s been wanting a tablet similar to mine, only a bit more streamlined and much lighter.  We’ve looked at a number of different machines, but nothing really caught her eye. Until yesterday.  We were in Anchorage to see Pixar’s Up 3D  (excellent, charming, funny, poignant, well worth the money, and the digital 3D is seriously cool) and there’s a new Best Buy in town, outside the back gate of Elmendorf. Best Buy is usually a circus, but they’ve got a good selection of equipment and their Black Tie extended warranty service is second to none. So we thought we’d go look.

First, it wasn’t crowded. This pleased me enormously – I hate trying to evaluate technology while I’m being crushed by a crowd of mouth breathers.  Usually Best Buy makes me feel like I’m trying to board a Tokyo subway at rush hour, but at 8PM on Sunday in Anchorage there was only a handful of people in the place and plenty of polite help.

It didn’t take my wife very long at all to spot an HP tx2 – she could probably have walked past a basket of puppies in the pet store window with nary a second glance, but that HP called to her. 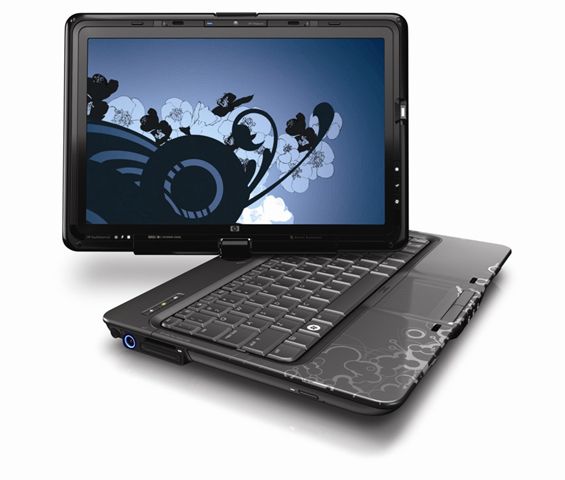 The tx2 is a touch and pen enabled tablet with a 12.1” HD digitizer touch screen incorporating HP’s TouchSmart technology, 2.1 core duo processor, 4GBs of RAM, 320GB drive and a super multi light scribe dual layer DVD. Fingerprint reader, webcam, and remote (for media and presentation control) built in. It’s running Vista Ultimate. It’s one of the most beautiful machines I’ve ever seen, fast, sleek, and light. I’ve spent the morning introducing it to the network and the other computers in the house, and now I’m installing my wife’s core office apps and moving her data and configuration settings from her old machine to the new one. The tx2 has been running on batteries for the last three hours and is still holding 53% charge (of course I haven’t been running the DVD drive, but the harddrive has been running almost continuously as I load data). The screen is gorgeous, crisp, clear, bright, and HD. The digitizer responds to the pen and to finger touch like an iPhone screen, simple finger motions control the machine, expand or contract or rotate and move the displayed images, control the sounds and video and a number of other functions. It’s pretty damned amazing.

I want one.  Sigh. But the keyboard is a little small for me and I like the bigger screen on the Gateway. Plus the GeekSquad at Best Buy just refurbished my tablet, gave me a new screen and everything, as part of their Black Tie service, so I expect that machine to last for quite a number of years yet.

We also picked up an HP Mini: 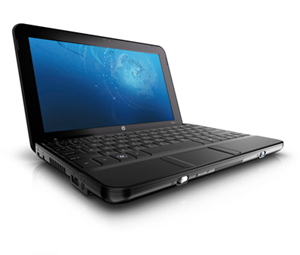 The Mini is basically a notebook about the size of a ham sandwich. It runs on an Intel Atom N270 processor, with 1GB of RAM and a 16GM solid state flash module which acts as the unit’s non-volatile storage instead of a harddrive – basically the machine has no moving parts, meaning that Li-Ion polymer battery lasts for hours despite being about the size of a slice of cheese in the aforementioned sandwich.  It runs on Windows XP, it’s got a couple of USB ports, an SD/MMC slot, and can connect wirelessly to just about anything there is.  It’s so damned light I expect it to float away.  You’re not going to store a lot of data on there, and the screen is only 9” wide, but it’s perfect for surfing the internet on the go and watching a few movies on.  The really nice thing about the Mini is that it retails for under $300, we picked this one up for $280.

I’ll carry my Gateway tablet, as usual. We’ll let my son use the Mini vice his personal laptop (which is much larger and heavier and has a dead battery which would have cost more to replace than the purchase price of the Mini), and my wife will probably parade through every airport between here and the panhandle showing off her cool new HP TouchSmart.  I’ll still haul along my ZEN, because I like watching movies on that over the laptop, and I’m sure my wife will do the same with her iPod.  And all of us carry our cell phones which work anywhere in Canada or the US without roaming charges. Each of us have a carry-on computer bag which will hold all our tech, plus a sweat shirt (airline blanket = gah), a couple of paperbacks, and a snack.

This upgrade in technology significantly reduces our traveling techno footprint. We don’t need my son’s large laptop, or the travel DVD player (and it's huge power supply and cords), and Becky’s new tablet is half the weight of her old machine and a dozen times more powerful.

I won’t say I’m looking forward to the hellish shit fest that is modern air travel in America, but new tech makes it a little less painful.

Email ThisBlogThis!Share to TwitterShare to FacebookShare to Pinterest
Labels: Things I do so you don't have to