Doublethink: The power of holding two contradictory beliefs in one's mind simultaneously, and accepting both of them. To tell deliberate lies while genuinely believing in them, to forget any fact that has become inconvenient, and then, when it becomes necessary again, to draw it back from oblivion for just so long as it is needed, to deny the existence of objective reality and all the while to take account of the reality which one denies — all this is indispensably necessary. Even in using the word doublethink it is necessary to exercise doublethink. For by using the word one admits that one is tampering with reality; by a fresh act of doublethink one erases this knowledge; and so on indefinitely, with the lie always one leap ahead of the truth.

In his novel, Nineteen Eighty-Four, Orwell described doublethink as a form of controlled insanity.  He defined it as a form of deliberate hypocrisy, the willful intellectual blindness to contradiction in a belief system.  However, doublethink differs from ordinary hypocrisy in that for a person to engage in doublethink he or she must first deliberately forget the that there is a contradiction at all – and then deliberately forget that he has forgotten the contradiction. He then has to forget the forgetting, and then forget that he forgot that, and so on. Once begun, doublethink must continue forever or else the practitioner faces a complete collapse of his worldview – hence, controlled insanity.

By definition, doublethink is a form of extraordinary hypocrisy.

Don’t you love it when bigots explain why they are the victims of bigotry?

Don’t you love it when haters protest when they perceive that others hate them?

Don’t you love it when the fearful rail against those that they think might fear them?

I find it an amusing travesty when privileged old white rich Christian men who have done absolutely nothing for their entire lives but scream hatred, bigotry, and intolerance get that whiny put-upon tone in their voices like hurt little children and then go on to rant about why (pick one) Jews, Muslims, atheists, women, gays, black and brown and yellow and red skinned people, immigrants, liberals, and so on and so forth are stickin’ it to those self same old men.

I find it utterly hysterical when privileged old white rich Christian men who deplore things like affirmative action and engender minorities to suck it up, suddenly start screaming that they themselves aren’t being given a fair shake and they demand the government give them their rightful due.

The pure distilled extraordinary hypocrisy of these people never ceases to amaze me.

And Pat Buchanan is their king.

I swear, I can’t hardly watch Buchanan talk without wanting to punch him in square in his foul sanctimonious mouth (just for the record, there is nothing hypocritical in this urge, I never claimed to a shining example of Christianity in the first place). This guy truly epitomizes everything I despise about hard-line conservatives and Christianity.

Now don’t get all spun up here. I don’t hate Christianity in general or Christians in particular. But I do detest hypocrisy, and I’m pretty sure the bible has something to say about hypocrites - and in fact the bible has a great deal to say about hypocrisy, and is very specific about it, and nobody in the bible condemns hypocrisy more than Jesus himself – check out Matthew Chapter 6, verse 2 for example. And again, in point of fact, the bible condemns hypocrisy a great deal more, and a great deal more specifically,  than it ever does homosexuality. Which makes me wonder why Christians such as Buchanan aren’t waging war against that, since by volume of biblical emphasis God hate hypocrites a hell of a lot more than homos.

I do utterly despise those so-called Christians, like the Evangelicals and members of the Traditional Roman Catholicism Movement (of which Buchanan is a vocal member), who have managed to turn their prophet’s message of peace, love, and acceptance into hate, fear, and intolerance.  These people are looking for something to hate, Christianity just gives them the excuse – providing, of course, that they engage in doublethink, i.e. specifically ignore the tenets of their belief system that specifically condemn how they think.

The following video is a compilation of clips taken from various news sources and interviews, with Buchanan expounding on why President Obama’s nomination of Judge Sonia Sotomayer for the Supreme Court bench is blatant discrimination against white men. 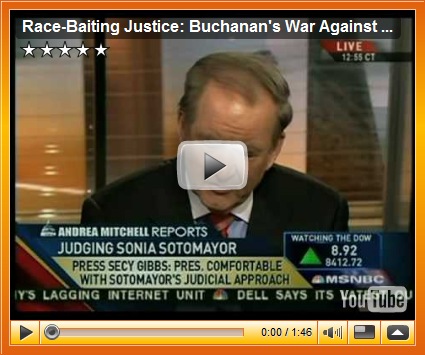 It hard to tell which minority he hates more, women or Latinos or non-English speakers. Note in particular, 1 minute and 15 seconds into the clip where Buchanan states clearly and in no uncertain terms that white men are the most persecuted minority in America today.

And he’s afraid that if a Latina like Sotomayer is put on the bench, this rampant discrimination will expand exponentially.

Let’s review a picture of the current Supreme Court, shall we? 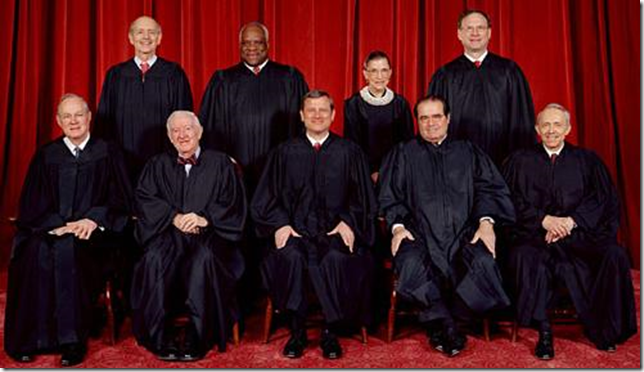 Of the nine Supreme Court Justices, seven are white men, one is a black man, one is a white women.  Two of them are Jews and seven of them are Christians – and five of those are Catholics.  If Sotomayer is confirmed, six of them will be Catholics – though we’ll have one less male on the Court.

It’s discrimination. Clearly the the court is stacked against old white Christian men.

There’s that Christian Conservative math again, seven out of nine is a minority.  I know that’s hard to wrap your head around, but it’s real similar to how the Earth is only 6,000 years old and all the animals, including dinosaurs, fit on the Ark. Doublethink, just accept it and forget that you ever had an issue with it to begin with.

See, this takes us right back to my previous post on the Conservative assertion that Liberalism is a mental illness; Buchanan epitomizes this type of conservative thinking, this Orwellian doublethink.  Up is down. Black is white. Wrong is right.  War is peace.  Hate is love. Injustice is justice.

I guess that’s why I’m not a Christian Conservative, doublethink makes my head hurt.

I’ll tell you what is not doublethink though, the fact that Pat Buchanan is a bigoted, hypocritical asshole.

There is some additional fine commentary on this very subject by the talented and witty writer John Rogers over on Kung Fu Monkey. Please, go check it out.