Well, as you all know, I maimed myself last weekend while working in the shop.

The wound is healing, the swelling is almost entirely gone now, and I’ve managed to make it through the week without tearing out the stitches, accidentally or otherwise.

Despite slicing myself open, I still was able to complete the week’s projects, and I thought you might like to see what I’ve been working on – you know, what was worth maiming myself over.

Remember those bear statuettes I showed you a while back? 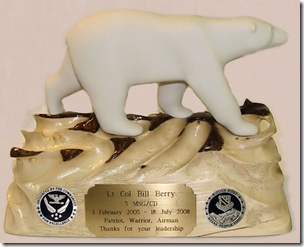 The same folks asked if I could do something similar.

The Air Force provided me with three large statuettes, resin casts of grizzly bear heads, that needed to be mounted, along with a number of military Challenge coins and a brass plaque.

Two of the statues were similar, and one was much larger.  Two of the mountings were to get eight coins, one would get only two.  All were to be unique works of art suitable as presentations for departing officers.

I had a piece of dried birch already cut in the lumber rack, but the spruce I had to cut from a large log.  The spruce log had been taken from a dead tree, killed by a bark beetle infestation, that had been drying in my log pile for several years.  I cut the log into two foot lengths with the chainsaw, then split the log down the middle also using the chainsaw.  Then each piece was trued up using hand planes, cut to a round blank on the bandsaw, and roughly shaped on the large disk sander.

Then I marked out where the mounting, coins, and plaque would go – and then cut out a mounting platform for the statuette using the drill press and hand chisels (and, yes, this is the step where I managed to gore myself with a razor sharp wood chisel). 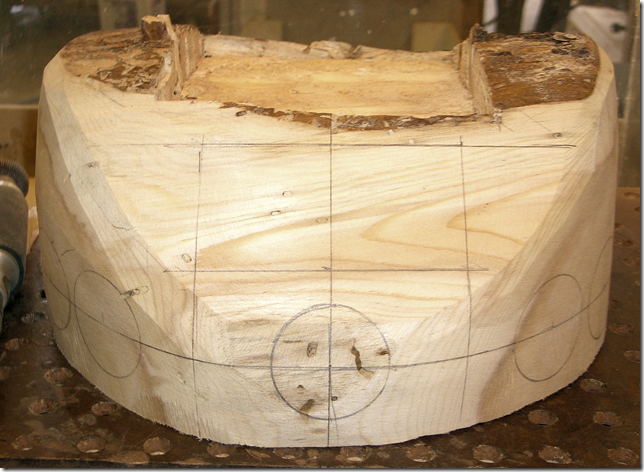 Because of the injury and subsequently having to take a couple days off, I didn’t get to the carving for a couple of days.  That gave me time to sit in the shop and stare at the blanks and sort of imagine what I wanted.

Normally I carve using a combination of both power tools (primarily a Foredom rotary tool) and hand tools such as mallet and chisels and carving knives. Because I’m predominately left handed but strongly ambidextrous, I tend to use power tools in my left hand and hand tools in my right. Obviously that wasn’t going to work, since my right hand was splinted and bandaged and about as useful as having a turkey drumstick grafted to my wrist.

So, obviously, the first thing to do was get rid of the splint, then rewrap the injury with a smaller bandage, and then cover that with a nitrile glove to keep out dust and dirt. I still couldn’t use hand carving tools, but at least I could use the right hand to steady the work piece while using power tools in my left.

I used the Foredom and a variety of burrs to sculpt the block. 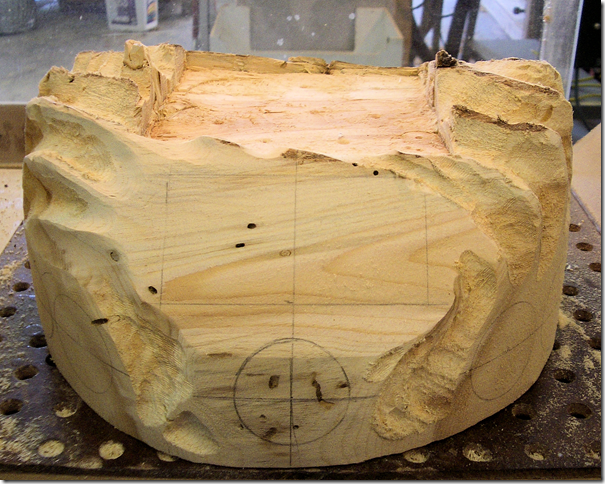 And then smoothed that into the final shape with fine carving heads and sandpaper: 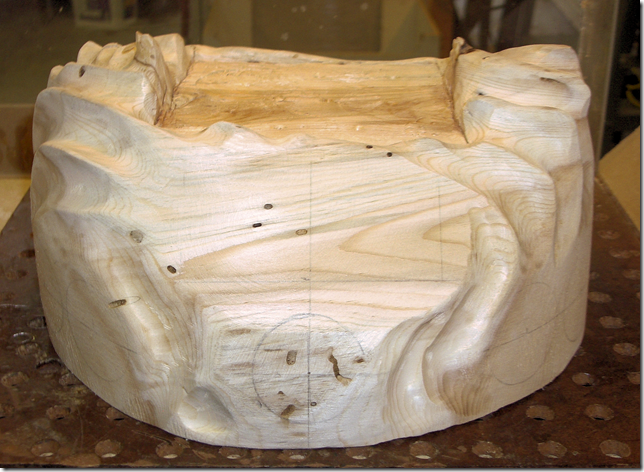 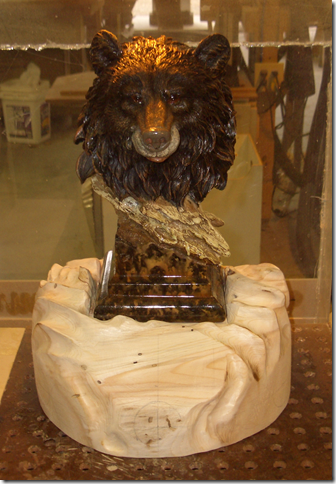 Using Forstner bits and one of the Shopsmiths in horizontal boring machine mode, I cut sockets for the coins. Then did the finish sanding and fit by hand – since each coin is slightly different in size.

The other two bases were made in a similar fashion, then they were saturated in Danish oil and several coats of a tough acrylic.

Once the finish was dried, the whole piece was glued together.  I finished each statue with a cork base on the bottom.

In the photo below, the statues on the right and left are finished except for the brass plaque which will be affixed to the flat area just in front of each statue. The left one is birch, the middle and right are spruce. The larger middle one is not yet finished. 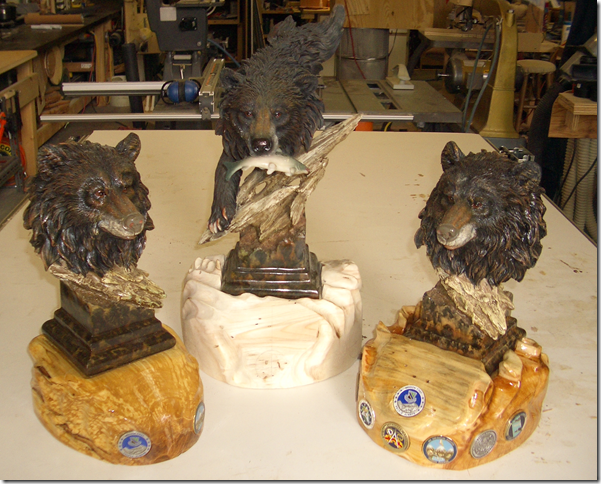 The finished pieces were delivered yesterday, the unfinished one is due tomorrow.

With that said, if you’ll excuse me, I have work to do.