Things That Chap My Ass About The Beach

You know, I’ve never been a big fan of the beach.

I’ve just never given much of crap about getting a tan or baking in the sun. I don’t like volleyball or those stupid looking sun visors, and the smell of coconut oil does not fill me with either joy or nostalgia.

As has been mentioned elsewhere, I’m spending time on the gulf coast of Florida’s panhandle. This area is famous for Lite beer, boiled peanuts, white sandy beaches, and its somewhat particular denizens – hence the coast’s unofficial moniker, The Redneck Riviera.

We spent yesterday smack in the middle of it all, at Navarre Beach.

And it was there that I remembered all of the things I purely hate about going to the beach.

Like the sea, for example. Oh sure, I spent most of my life as a Sailor on the ocean, and I have a deep and abiding respect for it. There are days that I truly miss it and miss sailing upon it. But I miss the Ocean, the Deep Blue Sea, the Atlantic and the Pacific and the Indian and the Arctic. The Gulf? The Gulf is full of weird green water, the kind of green that comes from the outflow pipe of a Russian nuclear power plant or a combination of algae, lukewarm temperatures, and water that is at least 20% urine. Hey, it’s not just kids who pee in the pool, fish and whales and dolphins and sharks and sea urchins piss there too. So do jellyfish, just saying. Honestly, what did you think that smell was? Swimming in the Gulf is like bathing in warm whiz. And when fish aren’t relieving themselves, they’re busy biting at the hair on your legs like retarded piranhas.

Then there’s the Gulf Coast sun. Seriously, who dreamed this up? Slather yourself in oil like a red snapper fillet and slide into the ol’ skin cancer broiler. And speaking of such things, here’s something I don’t get – Tanning Shops. Yes, tanning shops here in Florida, there’s one in every strip mall. How does that work? You pay people to get a tan? In Florida? You pay people to get a tan. In Florida. I’m thinking of opening a sauna, if people in Florida will pay for ersatz sunshine they’ll cough up major beer money for artificial heat and humidity too. I won't even need a salon, they pay me and I'll swing by their house and turn off their air conditioner, that'll be $19.95, Bubba. No checks, cash only.

And sand, once you’re covered in saltwater and oil there’s nothing better than a nice coating of grit. Pack your ass crack full and take some home. You know what’s fun? Watching a baby with a slobber covered cookie sitting in the sand while his mother is talking on a cell phone and not paying attention. Sometimes they find extra stuff to put in their mouth while digging in the sand for the cookie they dropped. Cigarette butts are my favorite.

The Redneck Riviera has certain features not found on other beaches, like, oh, Rednecks. You really haven’t lived until you get to watch a sunburned bearded potbellied 24 year old Alabaman with a mullet and a beer helmet attempting to surf on a My Little Pony boogyboard while taking video of himself with a cell phone camera in an attempt to get on America's Funniest Retarded Videos. No you really haven’t lived until you’ve seen that, or until you’ve seen the waves yank the rear of his Dale Earnhardt commemorative swim trunks down around his ankles – then you wish you didn’t live at all.

While mullethead is out there in the surf shouting, “Dahamination ya’ll! Ah got salt water in my Bud Lite! Bitch! Beer me!” his relatives on the beach are laughing drunkenly at his antics, lighting one Marlboro off the other and shouting helpful suggestions. If you’re really lucky Bitty Lou is decked out in a thong - kind’ve like Jabba The Hut wrapped in a rubber band and a couple of Sponge Bob Squarepants BandAids – and when she bends over to bury the baby’s dirty diaper in the sand like secret pirate treasure, well, let’s just say that view of her special tattoo is a sight that will stay with you for a while.

It is inevitable that there will be at least one weird kid. Now I’m not talking good weird, I’m talking weird weird. I talking brain damaged devil monkey weird. Jeffry “I’d like mine rare” Dahmer weird. You know him. He’s the teenager who stands waist deep in the waves about three feet behind you and makes those odd manic noises. When you look at him, he grins and says something quaint and colloquial like “Mexican food makes my butt feel funny!” His hands are out of sight underwater near his swim trunks and he’s grinning madly and you hope he’s being poisoned by a jellyfish and not doing what you think he’s doing. Don’t make eye contact or he’ll be your new best friend and you’ll have to take him home with you.

Weird Kids grow up, get married to Bizarro Girls, and somehow nobody ever manages to tell them that they are just plain fucking weird and that their behavior isn’t acceptable – so they eventually become Lecherous Old Bastards. They wander down the beach in Bermuda shorts with their bellies hanging to their knees like a bloated dead walrus and giant mats of multi-colored hair clinging to their backs like a balding mange-ridden gorilla. And they haven’t changed, they’re still making those weird noises and talking to invisible friends. They stop three feet away and stare at your wife’s bikini clad bottom and talk to themselves like Bill Murray in Caddyshack, “aaaaah Mrs. Rabbit you nasty bunny, aaaah! I love Mexican food!, aaaaah! My butt feels funny!” and their hands are hidden under their bellies near their shorts and you hope they aren’t really doing what you think they’re doing. And when you give them the eye and encourage them to move the fuck along, well, they go about three feet and then pull out a camera. “Ahhhhh Mrs. Rabbit! Just something to remember me for! Aahhhh!”

But I guess what really chaps my ass is this: 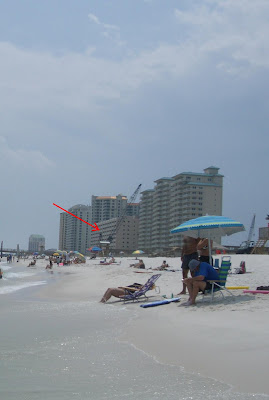 Navarre Beach is sandbar. Literally, it is a sandbar and nothing more. There are no rocks, no trees, no soil. It’s a fucking sandbar, about half a mile wide. You get there by taking a bridge over the inland waterway. Now, see that hotel marked with the red arrow? Prior to Ivan that was the only hotel on the beach. During Ivan that hotel got raped, literally, by 200 mile per hour winds and a storm surge that washed completely over the island in a wave 20 feet high. When we saw it right after the hurricane, that hotel was nothing but a concrete slab and a 3D line drawing of steel girders. Everything else, walls, ceilings, beds, desks, restaurant, fishing pier, and the all-you-can-eat catfish buffet ended up in the inland waterway a mile away on the other side of the sandbar.

What did we learn from this?

Well, it’s simple really – FEMA funds will build us a new hotel, plus a half dozen more even bigger ones, plus a couple of multimillion-dollar high-rise condos, on the same strip of sand (strip of sand, not strip of land, strip of sand).

And what’s really cool is that when the next hurricane hits, well the US taxpayers will get to fund their replacement too!

Ain’t life on the Riviera just grand?
Posted by Jim Wright at 3:44 PM