For those of us who fought there, al-Sahhaf’s press briefings during the initial invasion and surge towards Baghdad provided a daily dose of hysterically funny surrealism.

The day after those of us in Valley Forge’s CIC tensely tracked a pair of ballistic missiles fired from Basrah towards the amphibious expeditionary force staging in Kuwait, Baghdad Bob gave us this bit of comedy gold:

Umm Qasr surrendered a day or so later, the port there was secured in fairly short order, and our boats were escorting a British humanitarian relief convoy up the Shaat Al Arab bringing food and supplies to the civilian population when Baghdad Bob solemnly informed us:

"Iraqi fighters in Umm Qasr are giving the hordes of American and British mercenaries the taste of definite death.”

The fighting there was intense at first, but those demoralized Iraqi fighters had held about as well as a rope made from wet toilet paper. Most were dead or fled in the first hours of the battle. They abandoned Umm Qasr to its fate and fled north, their weapons and uniforms littered the road to Basrah. I don’t recall the exact number of Coalition causalities, but it was a hell of a lot closer to zero than to definite death (as opposed to indefinite death, apparently).

"Their forces committed suicide by the hundreds. ... The battle is very fierce and God made us victorious."

"They fled. The American louts fled. Indeed, concerning the fighting waged by the heroes of the Arab Socialist Baath Party yesterday, one amazing thing really is the cowardice of the American soldiers. we had not anticipated this."

Sorry, Bob, afraid not. And then there was my personal favorite:

"Their infidels are committing suicide by the hundreds on the gates of Baghdad. Be assured, Baghdad is safe, protected."

This was broadcast from a improvised studio because the day before al-Sahhaf’s Ministry of Information had taken a direct hit from a Tomahawk and had been obliterated. Baghdad Bob made this statement while American M-1A Abrams main battle tanks rolled through the city streets unopposed less than a hundred yards from al-Sahhaf’s position and the rumble of their treads could be heard in the background of the broadcast.

Back home Baghdad Bob became more popular than he ever was in Iraq. Websites sprung up, selling T-shirts and coffee mugs with al-Sahhaf’s latest gaffe printed on them. CNN rebroadcast his comments to the American public, usually without commentary, it wasn’t needed. al-Sahhaf was standard fodder for Jay and Conan and Dave, though their satires were only slightly more entertaining and funny than the comments they parodied.

In southern Iraq, those of us engaged in search and intelligence operations were issued packs of cards with the most wanted of Iraq’s crumbling regime, the Minister of Information was such a joke that he wasn’t even in the deck. We didn’t want him silenced, his daily commentary was the bright spot of our day, a moment of hilarity in the middle of war and chaos. As the war progressed, his comments became more and more detached from reality, and even Iraqis dismissed al-Sahhaf as a nutbar. In early April - I forget the exact date but it would have been during the first week – I was onboard a detained Iraqi vessel in the Northern Arabian Gulf. There was a broadcast from Kuwait playing in the ship’s pilot house where I was interviewing the vessel’s master. The captain was angry and animated, waving his arms around and punctuating his replies to me with chopping motions of his big scarred hands. I remember watching his mustache in amazement, it was like a huge furry snake (Iraqis have a particular cultural fetish for mustaches, even swearing by them upon occasion). Suddenly he fell silent, Kuwaiti radio was playing the daily quote from Baghdad Bob:

The Iraqi captain looked at me, rolled his eyes, and said, “Congratulations, Baghdad has surrendered. Obviously.” He shrugged, “It is as God wills.”

As funny as Baghdad Bob’s broadcasts were, they also provided a useful check on the intelligence – if Mohammed Saeed al-Sahhaf said one thing, it was a pretty good bet that precisely the opposite was true. It was also a pretty good indicator of the effectiveness of Saddam’s information apparatus and his control over the civilian population, i.e. tenuous at best. In retrospect, the sad part about the whole thing, of course, was that Mohammed Saeed al-Sahhaf actually believed what he was saying. He was a diehard Baath party loyalist, and he truly believed that Saddam would pull victory from the mother of all battles. al-Sahhaf truly believed in the mysticism of the desert and those heroic tales of ancient Arabs who ground invading armies into the sand and left their bones to bleach in the sun. His loyalty to Saddam never waivered, and even after he’d fled to the UAE he proudly proclaimed that he’d done his duty to the bitter end. But the truth of the matter is somewhat different – because some Iraqis did believe those broadcasts from Baghdad. And they kept fighting, and many of them died. After the war, many of the loyalists were bitterly disappointed to discover that they’d been lied to by a deluded fool.

Since the war al-Sahhaf has become a synonym within the intelligence community for military and corporate people and communications that stubbornly refuse to acknowledge reality even when directly confronted with facts proving their statements wrong, wildly inaccurate, or based on completely fabricated information.

Allow me to give you an example:

We are cooling. We are not warming. The warming you see out there, the supposed warming - and I am using my finger quotation marks here - is part of the cooling process. Greenland, which is now covered in ice, it was once called Greenland for a reason, right? Iceland, which is now green. Oh I love this. Like we know what this planet is all about. How long have we been here? How long? Not very long.”

That little gem was GOP Chairman Michael Steele’s response to questions regarding his stance on global warming. There are so many things wrong with that single paragraph that it’s almost impossible to determine which is more hysterically funny.

The Earth is cooling, folks, not warming. Despite the mountains of long term data that shows just exactly the opposite, the Earth is cooling, so says the GOP chairman. What proof does he offer for this startling conclusion? The supposed warming is part of the cooling process. One wonders exactly where Steele got his education, or if logic was part of his law degree, or precisely what al-Sahhaf style reality he dwells in – because last time I checked, warming things up usually doesn’t make them cooler.

His grasp of history is equally firmly based in some alternate reality. Eric the Red named Greenland such in order to hoodwink his fellow Vikings into emigrating. And I lived on the island of Iceland, it’s not green, trust me here folks. But let’s say that it was, I guess that would be one of those “warm means colder” examples Steele was talking about. I can only assume Steele also took places like “Hell” Michigan into account when formulating his scientific theory of global climate change based on place-names.

Asked about education, Steele responded with this:

Roberto? Who the heck is Roberto Mussolini?

Or his honor the honorable Winston Churchill. His honor?

Steele didn’t expound on the differences between Marxism, socialism, and capitalism, but I’m sure it would have been entertaining, a true Baghdad Bob moment - especially since out of the four historical leaders he named (we’ll give him a pass on Roberto), two of them were fascists and none were Marxists. FDR was a democrat who championed The New Deal, which most members of the GOP consider blatant socialism and hardly an example of the type of capitalism they seem to hold in such high regard. But, hey if we understand the differences between fictional versions of people then we can appreciate what these times mean. These times, today, I’m guessing from the context, i.e. the penetrating observation that “History is a precursor of things to come.”

History, it’s like the shit that happened in the past that we just make up, dude.

The sad thing here is that Steele, like Baghdad Bob, believes what he’s saying. He’s a party loyalist. And his worldview is based on complete nonsense. He’s busy denying reality while the tanks are rolling past his window.

He is right about one thing though: education, it’s key.

Too bad Steele doesn’t appear to have any. 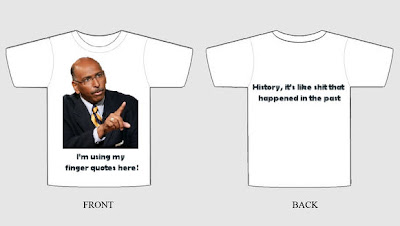