From the Lathe: You Win Some, You Lose Some

I’m more than a little irritated at the moment, for a number of reasons that I won’t go into.

Suffice it to say that if I post anything topical today, I may regret it later.

Instead I’ll leave with you with a couple of pictures of my latest work.

This bowl is made from green turned Alaskan Birch heartwood. It was green turned to final form, allowed to dry very slowly under controlled conditions over a period of several months until the wood was at roughly 8% moisture and stabilized. Then it was sculpted along the heartwood grain lines, and shaped to create the filigree. The sides are decorated with carved reliefs of an Alaskan musher and a team of sled dogs, which are also wood burned to enhance their look.

This piece is Alaskan Birch Bowl #102 and is part of an ongoing series of Alaskan images, and a continuation of my own unique style of bowl turning and carving. The idea here is to invoke the image of a Yukon musher chasing the trail through a swirling arctic snow storm – whether or not he (or she) is delivering the mail to Rainy Pass or carrying diphtheria serum to Nome I’ll leave as an exercise in imagination to the observer.

This piece is not for sale, it’s a gift for friends whom I will be having dinner with tonight. This weekend they both will be mushing 1100 miles from here to Nome in the 2009 Iditarod Sled Dog Race. Their names are Aliy Zirkle and Allen Moore, wish them luck. 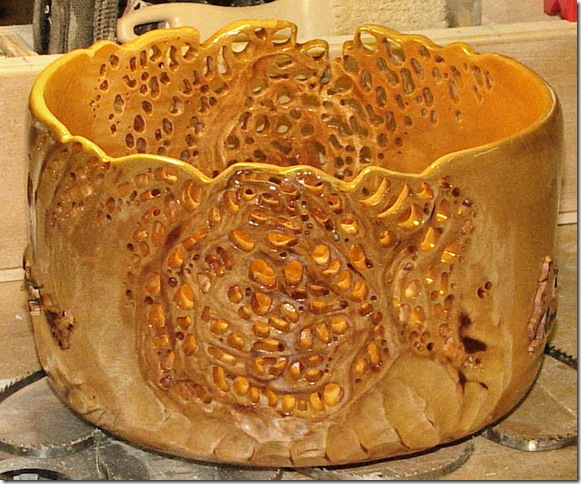 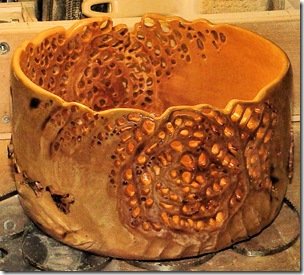 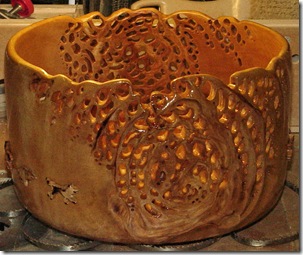 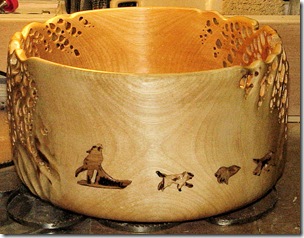 As the post title says, you win some, you lose some. This last picture shows what happens in the later case.

Despite the fact that this morning I was turning at low speed and had left the bowl walls very thick (intending to pare them down later), the piece flew apart on the lathe. Fortunately I was working off the face (to the right in the image, hollowing the inside, for you non-turners) when it let go, which is a good thing considering that the flying chunk probably weighs several pounds. Where the missing piece is, I have no idea. ShopKat and I looked for it for fifteen minutes. It remains lost, somewhere on the far side of the shop, probably under the garden tractor or one of the ATV’s. Maybe it’s up in the canoe, which hangs from the ceiling 20ft in the air. It wouldn’t be the first time part of an exploding bowl has ended up there.

It happens, and breaking stuff is therapeutic – or so I’m told. 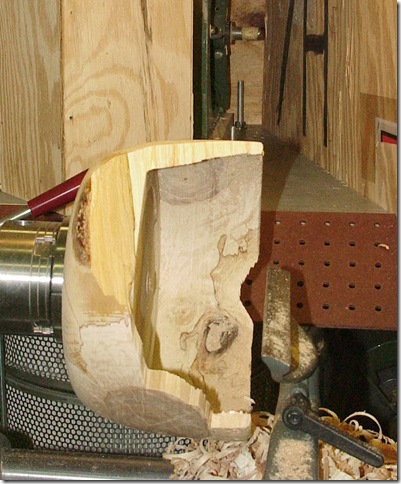 I’ll be off-line until further notice. Enjoy your day.