I had a post finished, and my Internet connection dropped out.

I went back to writing while I waited for the connection to come back up.

Some friends called, they were cleaning a Ruger Mk III 22cal pistol. They’d taken it apart and couldn’t get it back together properly. The slide kept jamming. This is a common problem with this particular weapon, like most weapons there’s a trick to reassembling it correctly – and the Ruger is a bigger pain in the ass than most, it's like German engineering, or rather over-engineering. (Update, Note: just to be clear, Ruger is an American weapon). I hate Rugers, they're fine weapons, don’t get me wrong, but it’s like working on a BMW – you’ve got to be a humpbacked four-armed, left-handed, googly-eyed midget to work on the damned thing. Also it helps if you know how to swear in German. You have to point the barrel down while inserting the main spring, then flip the weapon over so the barrel points up and the hammer lever drops into the pivot slot on mainspring lever. Only then can you tension the spring and close the housing. If you don’t do this correctly, the hammer is forced up into the firing position and doesn’t retract, which means the slide jams against it. This process sounds easy, and it is, but it’s not something you can talk somebody through on the phone. So I had them come over and showed them how to properly disassemble and reassemble the weapon. If it seems odd that they didn’t know how to take apart their own weapon, well, it’s a 22cal Ruger. A weapon like that gets cleaned about once a decade, usually (unless you’re anal retentive about it like I am and clean them after every firing. A clean weapon is a happy weapon. Just sayin’).

OK great, got that done. Just as I was heading inside to check the Internet connection, the power went out.

It came back on after five minutes.

I wasn’t worried, both my word processor and blog editor are set to back up every couple of minutes.

Except, of course, they didn’t.

I lost the entire blog post and 2000 words of the novel. Goddamn it all to hell.

Also did I mention that this week is spring break? No? Well it is. So the 12-year old is under foot all day, which is why you’re not getting anything deep, blogging wise.

And now the Internet is back up and I’ve got nothing for you, deep or otherwise.

So, here have some ShopKat: 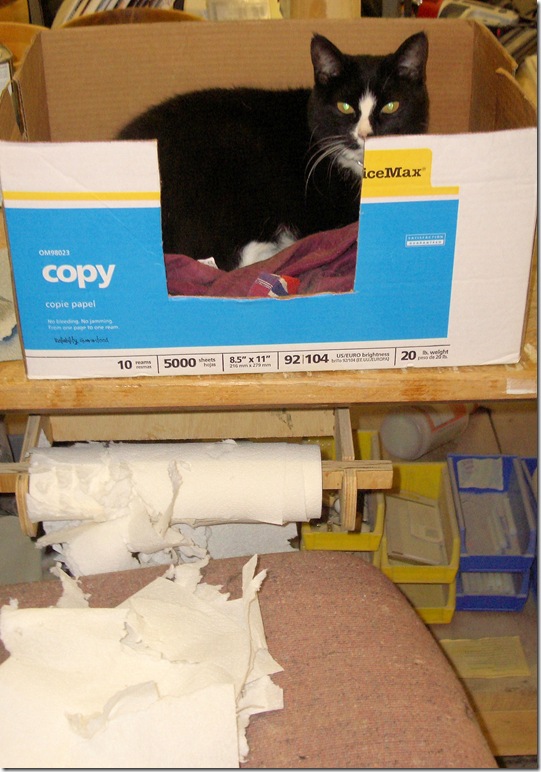 Before you ask, yes that’s her box. It’s full of old towels and it sits on the work bench next to my carving station. Because otherwise we have issues over who owns that chair. Once I put the box on the workbench, she stopped trying to kick me out of my chair, and if you don’t think a two pound cat can kick a 180 pound combat veteran out of his own chair, you’d be wrong, wrong, wrong, I direct your attention to the aforementioned paper towels.

Hence the box. Now everybody is happy.

Now, if you’ll excuse me, I’ve got to figure out why the backup didn’t work and recreate ten pages of novel.

Email ThisBlogThis!Share to TwitterShare to FacebookShare to Pinterest
Labels: Things, Things about cats, Things happen, Things I blog about when I don't have anything to blog about