Jerkoff of the week - Racist Idiots

Grant Griffin, a 46-year-old white Georgia native, seems to feel that the United States is going to hell in a hand basket, "I believe our nation is ruined and has been for several decades and the election of Obama is merely the culmination of the change. If you had real change it would involve all the members of [Obama's] church being deported," he said.

Yeah, that would be some real chance all right. 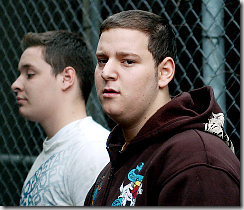 who randomly assaulted Ali Kamara and beat him with a pipe and a baton - while yelling 'Obama!' These two goons wanted to be Marines - and obviously have no idea what being a United States Marine is all about, I guarantee you that these two hoods would never have made it past Week 1 of boot camp. Read the comments under the Daily*News article, if you can stomach them.

- The Secret Service is investigating a sign posted on a tree in Vay, Idaho, with Obama's name and the offer of a "free public hanging."

- In a Maine convenience store, an Associated Press reporter saw a sign inviting customers to join a betting pool on when President Obama might fall victim to an assassin. The sign solicited $1 entries into "The Osama Obama Shotgun Pool," saying the money would go to the person picking the date closest to when Obama was attacked. "Let's hope we have a winner," said the sign. Having lived in Maine myself for a number of years, I have to say that it doesn't surprise me at all that the store felt comfortable putting up a sign like this and not worrying much about what customers might think - because nearly every customer would be just fine with it.

- White supremacist web sites are pulling in the new recruits. A major site, stormfront.org, was temporarily off-line Nov. 5 because of the overwhelming amount of activity it received after Election Day. Dalderian Germanicus, a stormfront poster from Las Vegas, said, "I want the SOB laid out in a box to see how 'messiahs' come to rest. God has abandoned us, this country is doomed." Germanicus doesn't speculate on why God has abandoned racist pinheads like himself though, or if maybe what he's doing is not something his God approves of.

The list is endless. Racist rhetoric, hate crimes, and incidents like those described above are up a hundredfold since November 6th. I guess I'm not surprised. I'm disappointed, but not surprised.

Prior to the election, I was under no illusion that racism was dead in America - but the raw, illogical, ignorant and unabashed bigotry evident in the thousands of incidents like those described above simply astounds me.

These ignorant fearful hateful idiots need to understand something, Barack Obama wasn't just elected by African American voters, he was elected to office by an overwhelming number of White voters. Barack Obama will be president because a significant majority of Americans want him in the White House. That's democracy, or our version of it anyway. That's America. Our America.

And it's time the racists got used to it.