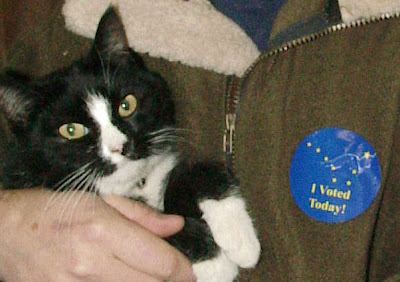 As you can tell from the pictures, Shop Cat, [insert actual animal name here when final determination is made], is unimpressed. Cats simply aren't big on democracy in general, being strict Monarchists. I get the impression that cats consider democracy an oddity particular to the servant monkey class. (Me! Pet Me! Feed Me! Scratch Me. My box, it's stinky, fix it now, servant monkey! Me me me!)

No lines. None. At least when I went in. There were a couple of people when I came out of the booth. I vote on the MatSu college campus and most of the students were wearing "I voted Today!" stickers, so you know, cool.

Of course, it being Alaska, I'm pretty sure most everybody voted for Sarah Palin and What's His Name (not the Black Arab Guy, the other one). Considering the number of McCain/Palin signs on the cars in the parking lot, I figure that's a pretty good indicator. Whatever - that's democracy for you, and they should vote for who they want, not who I want, even if they're wrong, wrong, wrong. Damnit.

Procedural note: Poll workers may NOT discuss anything about any candidate. Period. Including the fact that a candidate may be left or right handed. I had to move the registration book around so I could sign it (being left handed and not being able to move said left arm very far due to nerve damage. You want to be able to read my signature, you let me put the damned book where I want it. Just sayin').

Which caused the nice older lady behind the desk to say, "Hey, both of the candidates are left handed too!"

At which point the less-nice older lady running the polling station stepped in, "Stop! Poll workers may not discuss the candidates in any way. Any further discussion regarding the candidates will result in you being sent home! (she was addressing the poll worker, me she just glared at)."

Whoa, that's strict, but you can see why the rule exists. Don't want dexterity to influence the voting public now, do we?

Anyway, my patriotic duty is done. Not that I have any illusions about which way Alaska's pitiful three electoral votes are going, but hey, it's the principle of the thing.

Email ThisBlogThis!Share to TwitterShare to FacebookShare to Pinterest
Labels: things I do to get a cool sticker