A Question for the Candidates

A federal judge has ordered the immediate release into the United States of a group of 17 Chinese Muslims who have been held in the U.S. military facility at Guantanamo Bay, Cuba, for several years.

In 2001, just after the U.S. invaded Afghanistan, a group of ethnic Uighurs (or more correctly, Uyghurs) fled the country into neighboring Pakistan. Where they were captured and detained by the Pakistani military. U.S. intelligence became aware of the detention and subsequently judged the Uyghurs to be members of the East Turkmenistan Islamist Movement.

I written before how intelligence, especially in time of war and crisis, can go horribly wrong. This is something I know a great deal about, and have extensive experience with. And as you are about to see, that's exactly what happened here.

The name, East Turkmenistan Islamist Movement (ETIM), is a loose term used to describe ethnic Uyghurs who advocate the creation of an independent, self-governing nation, commonly referred to as East Turkestan or sometimes Uyghurstan, within the Xinjiang semi-autonomous region of the People's Republic of China. Xinjiang borders both Afghanistan and Pakistan. Here's a map for those of you not familiar with the geography: 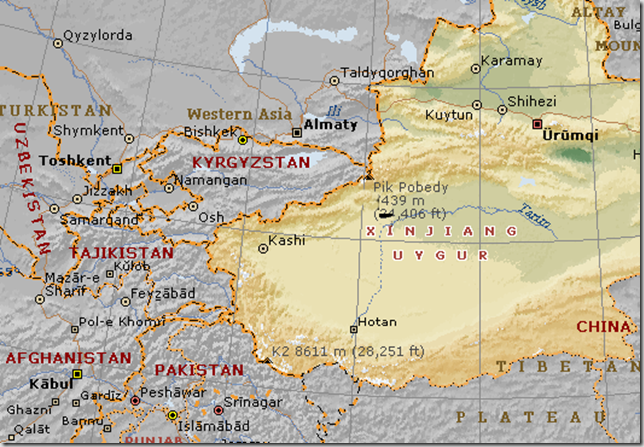 Note: click on the image for a link to an interactive map in the World Atlas Online.

A bit of background regarding the Uyghurs. Following centuries of warfare, the Uyghurs, Kyrgyz, Uzbek, Kazaks, Tadjiks, and a number of other steppe peoples came under control of China. Following the Cultural Revolution, these people, and the largely Muslim Uyghurs in particular, were forced to assimilate into Chinese culture. The assimilation was strictly one way. Like all non-ethnic Chinese, the Uyghurs daily face religious persecution and extensive discrimination. Muslim Uyghurs have strict limits on the practice of their faith: they may only use a state-approved version of the Koran, they cannot wear beards or head scarves, and the state controls management of all mosques. Children under the age of 18 are not allowed to attend church or mosque, and religious figures may not hold state jobs or be teachers. Significant numbers of Uyghurs have been executed as enemies of the state.

Now in all fairness, China does have a historic claim to the Xinjiang region, dating back well over a thousand years - and a number of Uyghurs have engaged in acts of terrorism as we in the west define it. China says that the terrorists are hiding behind claims of humans rights and freedom of religion in order to perpetrate acts of terrorism and weaken the state's hold on the region - and there is some validity to this. However, there is also validity to claims that China has marginalized the Uyghurs using brutal repression.

Be that as it may, there is no question that members of the ETIM have used terrorism and violence against the Chinese, and as such the group was declared a terrorist organization in 2002 by the Bush administration under pressure by the Chinese government and in exchange for China's limited cooperation in the Global War on Terrorism.

Because of this designation, Pakistan turned the seventeen detained Uyghurs over to the U.S. who promptly detained them as terrorists at Guantanamo Bay, Cuba - where they've remained under guard until yesterday. That's about seven years, just in case you need help with the math.

Now understand something here, even if these people had been full-blown members of EITM, they committed no acts of terrorism against the United States or her allies. Their crimes, if any, would have been committed against China. However, China has lodged no international complaint against them. The men were apprehended fleeing the U.S. invasion of Afghanistan, which unless I'm completely off the rails here, is not a crime in anybody's books. Though crossing into Pakistan could be considered a crime under Pakistani law - but that would hardly be terrorism, especially if they claimed refugee status, which they did.

Nonetheless, they went to Gitmo as terrorists. Where after three years of interrogation, actual intelligence work, communication with China, and the efforts of Uyghur Human Rights Project in America - it was determined that the men were not in fact terrorists at all. Period. Just a bunch of unfortunates who got caught up in the struggle, and nothing more.

So we gave them an apology, a couple of bucks, and a first class ticket home.

What actually happened is that because there is neither Constitutional administration or any kind of proper international oversight at Gitmo, we, well, we just kept them there.

That's right. They weren't terrorists, or criminals, or anybody who was any kind of threat to America, just a bunch of poor bastards who happened to be in the wrong place at the wrong time. But for the last seven years, four since we determined that they were nobodies, they've been held at Gitmo by the United States of America.

See, here's the problem. China wouldn't let them come home, and nobody else wanted them, and because the Bush Administration regards the Constitution, U.S. Law, international human rights agreements, and Habeas Corpus to be nothing but quaint outdated notions -they got to stay in jail. For four years. Four damned years because our leaders could not, and would not, admit their mistake.

For four years, seven if you count their detention prior to the determination of their status, these people have been held in military prison, without recourse, without representation, without the right to protest. We knew they were not terrorists, or criminals, or anything else - but we kept innocent people in jail simply because it was the easiest thing to do. We did that, not China, not North Korea, not Iran, us. The United States of America, land of the free, home of the brave, bastion of civil rights, and beacon of freedom to the world. Us. And if they weren't enemies of America going in, they sure as hell are now.

You have no idea how much this offends me.

No really, you don't.

I feel nothing but rage at the small tyrants who have stolen our country away from us and the ignorant tyrannical bastard in the White House who continues to perpetuate the abomination that is Guantanamo Bay and all the rest of the secret prisons. I've written extensively about this (here and here and here and here for starters), I've spoken out in person and on the Internet, and I will continue to speak out. I have written to my congressman, and my senators, and my governor, and the presidential candidates, and Jimmy Carter, and anybody else who will listen and I will continue to do so. This must not be allowed to stand. Those responsible must be held accountable under the law and the Constitution and I will not rest until they are.

Those of us who fought for this country swore an oath to uphold and defend the principles of the United States. We swore to give our lives if necessary to defend freedom, democracy, justice, and liberty, not just for Americans, but for all. These are not just words, but the very foundation of America, and they are the very reasons so many have given so much over the last two hundred years.

There are those who say that we cannot pull out of Afghanistan or Iraq or any of the other places we are currently engaged in - because to do so would mean that those Americans who died in the conflict gave their lives for nothing. This is one of the loudest conservative rallying cries against the Democratic presidential nominee. We must not tuck tail and run, because the sacrifices of the thousands of American servicemen killed in those conflicts would then mean exactly nothing.

Just as the ultimate sacrifice of 50,000 thousand servicemen in Vietnam came down to nothing when the last chopper lifted off from the roof of the U.S. Embassy in Saigon.

And they are absolutely right.

But what these same exact people fail to see, what they deliberately blind themselves to in their patriotic fervor, is that when we allow our leaders to hide away innocent men, when we allow secret prisons and secret tribunals, when we throw away the concept of habeas corpus, when we as Americans allow torture and unjust imprisonment - we spit in the face of every single American who swore to give their lives in defense of the Constitution and the principles of Freedom, Democracy, and Liberty for All. When we allow this to stand, we spit into the faces of Washington, Jefferson, Adams, Franklin, Paine, and all the men who fought and died and bled in order to create this country. We spit on our history and our principles and our flag. And this must not be allowed to stand.

I do not hate America, I love this country and the ideals it stands for - and I spent 23 years of my life proving it each and every day. But I am ashamed by what we have allowed ourselves to become. We must regain our honor and our dignity and our heritage if we are to continue to call ourselves Americans.

I watched the presidential debate last night, I watched the candidates and I listened to the sound bites, and I watched the Americans sitting like good little ducks in a row behind the speakers - and I wondered, which one of these men has the guts, the vision, the strength, and the honor to change the faulty course the last eight years have placed us on? I wasn't there and I didn't get to ask a question but if I were it would this: Senators Obama and McCain, what are your intentions? Will you uphold your oath to the Constitution and return America to a land of Honor, Justice, Democracy, Freedom, and Liberty? Will you restore our pride in ourselves and the admiration of the world? Will you?

But, I fear I already know the answer.

Email ThisBlogThis!Share to TwitterShare to FacebookShare to Pinterest
Labels: Things about Terrorism, Things that offend me