Got a package in the mail the other day.

We get packages all the time, so I didn't notice right away.

Usually it's clothes my wife orders through the mail (not a lot of petite woman's clothing stores in Alaska and my wife is like a real wife, only smaller, so she normally orders business clothes through the mail from the lower 48). If it's something for me, she'll toss it on the table next to my recliner and eventually I'll get around to it.

I didn't recognize the return address and I didn't remember ordering anything recently. Hmmm, suspicious. Something from Walter Wagner maybe? My own micro-black hole? Cool, maybe it would suck up all the damned cat hair.

Nope. It was a shirt. Yeah, yeah, stop that giggling. 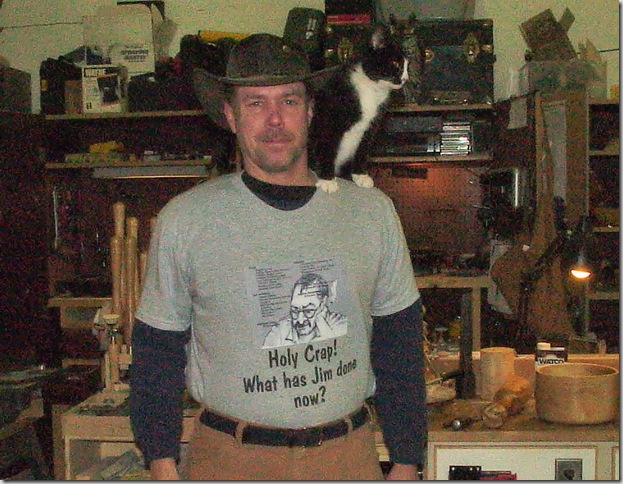 Apologies for the crappy picture. The Sony's batteries are running low and I didn't want to run into the house and get another one. Yeah, I am just that lazy, thanks for asking.

The back says "Gawd, I'm an idiot!" which is the publicly sanitized version of Nathan's personal motto, and even more funny if you ask me.

You'll notice I'm not alone in the picture. And the creature on my shoulder doesn't resemble either The Fat One (which would probably kill me to have on my shoulder) or Stupid.

No, Nathan didn't send me either of his brood, accidentally or otherwise. This one arrived all by itself. Night before last both of our cats were pressed against the glass door leading out onto a small porch off the sunroom. They were twitching their tails and staring out into the dark. I didn't pay them any attention, there's a small squirrel that likes to sit on the firewood pile and do the cat taunting dance and I figured that was what was holding their attention (seriously, that squirrel is a jerk when it comes to mocking the cats, which I find hysterical). Anyway, my wife detected a mewing sound, which frankly I never noticed (twenty years of having shit blow up next to my head, sue me if I can't hear high freqs any more), and went to investigate and discovered a small black and white cat outside the door crying to get in.

Hmmmm. Didn't look feral from what I could tell. And I'd seen it around the yard earlier. Nothing unusual, the neighborhood cats make the rounds every day through our backyard, looking for carcasses of birds that occasionally slam into the sunroom windows and break their stupid necks. Hey, it's thirty feet of big assed glass windows, I've got 'predator silhouettes' on each window which are supposed to keep the little birds away. Yeah. Sure. Every other day BANG! and another one bashes its brains out. Not much I can do about it. Sorry. And the cats come by and clean up the wreckage, leaving little piles of feathers in the snow.

Anyway I figure the cat would eventually lose interest and wander off home.

It was still out there the next morning, rolled up into a tight little ball on the porch.

Damn. So I went to check on it, figuring it would run away as soon as I got close. Instead it came straight at me, mewling piteously, and shaking like a leaf in the subzero cold. And that's about the time I realized that it was not very old and that it was scared, hungry, and damned near frozen to death. The thing clung to me like a drowning man grabbing onto a life-preserver and tried to burrow into my jacket.

It turns out that I'm not the kind of guy who can leave a kitten to freeze to death. Yeah, imagine how disappointed I am with myself.

I couldn't bring it into the house, Stupid and Tubby would have torn it to shreds, cats don't like new cats in their territory, so I took it out to the shop. After the kitten had warmed up and stopped shaking, I got some food and water which it devoured like it was starving - though that was probably just the normal cat hunger, the kitten looks well cared for, not starved or ragged, so it couldn't have been outside on its own for long. No collar. No fleas. No worms. No injuries. Seems very healthy. It's a little female and just incredibly affectionate. She's also utterly fearless. She followed me all over the shop and then went off to explore. Eventually she curled up on my shop stool and watched me. None of the power tools scared her, not even the thickness planer which howls like a banshee in operation.

She obviously belongs to somebody and I suspect that somewhere there's a kid in tears wondering what happened to her. I figured she couldn't have made it very far and so I checked with the neighbors, both beside me and down the hill behind my house. Nobody's missing a cat. No missing cat posters on the community mailboxes or power poles.

She spent last night in the shop. I gave her more food, my wife found an old towel for her to sleep on and I put out a pan of litter. She was curled up asleep on my stool this morning when I turned on the lights. She shows no interest whatsoever of going back out into the cold and seems to be perfectly happy in the shop.

Today I'll take her down to Animal Control and see if she's chipped, and if not I'll put up some posters of my own and see if I can find her owner.

If not, well, I don't know what to do. I'd hate to give her to Animal Control or a shelter, but I seriously doubt the other cats would accept her into the household. Maybe I'll end up with a shop mouser. We'll see.

Right now, she's asleep on my workbench and acting like she owns the place. 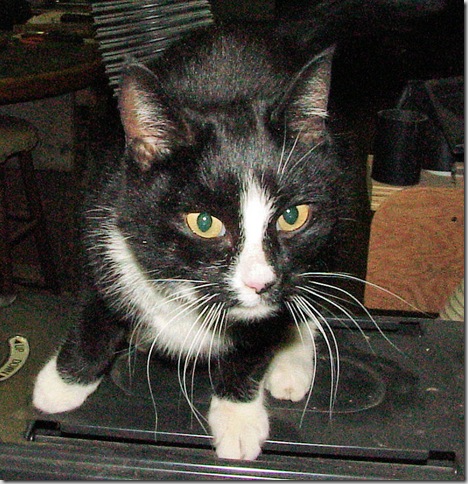 Frankly, I'm surprised the eagles didn't get her.