I wrote this two years ago when Thunberg was 16 and after she spoke at the UN. It was a post on Facebook and a short thread on Twitter. The Facebook version is suddenly trending again and my DMs are full of angry Climate Denialists (and helpful editors who missed the date on the post and are busy telling me I got her age wrong), all of which means it will likely get taken down by FB's algorithm.

So, I'm reposting an updated version here as a recap.
-- Jim

Oh, do you hate her.

That's how you see her, as a kid. A child. How dare she act more adult than you, right? 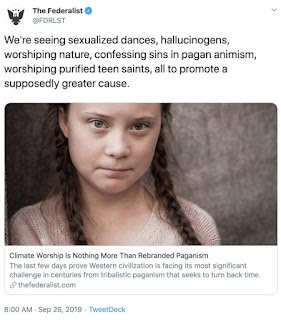 You hate her. Because you can't understand her. And that makes you afraid. And so you have to make her into a monster.

Most of all, you hate her because she's from the future.

And not just any future, she's from your future. The one you made. A future that is the direct consequence of your lack of action.

She's the ghost of your Christmas Future.

That's the part that really gets you. That, right there.

See? You're that guy. Privileged. Entitled. Self-centered. Spoiled. You're the guy who throws your trash out the window into somebody else's front yard and drives away without slowing down. Without a second thought.

Somebody will pick it up.

You drive down the road and see all the garbage in the ditch and you make that tsking sound and roll your eyes. Look at that mess. Somebody should clean that up. Somebody. Not you.

That's right, you'd be dead by the time the bill came due and you wouldn't have to pay.

You were going to stiff the future for the check.

Somebody would clean up your mess. Somebody. Not you.

Except, here she is. Travelled in time. The future. In your face. Bold. Brash. Pigtailed and pissed off.

You threw your trash out the window into her front yard and she caught you, got your license plate number and tracked you down. Here she is on your front porch, with your garbage in hand demanding that you clean it up. That you take responsibility for your own mess.

And you're not even ashamed. Are you?

Instead, you're mad. This fucking kid. How dare she rub your nose in what a selfish, self-centered son of a bitch you are, right?

That's what you're mad about.

That you got caught.

You thought you'd never be held to account. You thought the future would never show up on your doorstep. You were gonna escape. Ha ha! Your problem, bitches! Somebody would clean it up. Somebody. Not you.

But here she is. Arrived from the future. Demanding you pay your own check. And boy oh boy, does that make you mad.

Oh, how you hate her.

You hate her because she has the courage to stand up when others won't.

You hate her because she has the guts to face down the entire world without flinching.

You hate her, because you know she's right.

You hate her because she's more of an adult than you'll ever be.

Most of all, you hate her because she's from the future and she's fearless.