I've been mostly offline all day.

Today was the first day it hasn't rained in three weeks. So, I figured I'd better mow some grass or else I might get lost and eaten by wild animals between the house and office.

My wife and I are also selling some property we own in another state and that's the usual paperwork nightmare. So, part of my day was taken up reading over contracts and signing things.

I'm also installing storage in my main desktop machine. Which so far is mostly a waste of time given that the operating system will not recognize the new volume. Ah, the joys of living in the information age. It's not really a huge deal, given that I don't really store much of anything on local machines, all my data is storage in my own clouds on RAID based systems. Still, it irritates me.

I'll have another go at it tomorrow.

What I'm saying here is that I've been offline and I'm not much feeling like politics today.

Now that I'm migrating some of my content back here to my own site where I have better control over things and a (possibly) reduced likelihood of getting myself suspended from various social media platforms, I'm seeing an influx of readers who are used to me on social media but perhaps not here on my own site.

So, a few notes about how things work:

So, if you post a comment, it may take a while to appear on the site. Please don't keep trying to repost it. I'll get to it eventually.

There are commenting rules.

You should read them. There's a link directly above the commenting dialog box. Those who don't obey the rules will not be allowed to post.

I don't tolerate trolls, idiots, or conspiracy nuts. If you're one of those, your comment will not post. Who decides who's a troll, idiot, or engaged in conspiracy theories? Me. Don't like that? Too bad.

I don't have to give you a platform.

I don't have to give Trump voting, MAGA loving, anti-vaccinated jackasses equal time, and I probably will not. If you're stupid, that's your problem, I won't let you make it mine.

Don't be an asshole to other commenters.

Who decides who's being an asshole? You guessed it. If you're an asshole to other commenters, you'll be removed.

I mean, free copyediting, right? However, beyond that, if you want to be my editor, you'd better be paying me. Or, you know, write your own stuff.

Speaking of paying me, if you like what I do you can pay me to keep doing it, either by becoming a Patreon or via PayPal. It's not necessary that you do so. None of my content is behind paywalls, nor will it be. But if you do decide to kick in, I appreciate it. I'm entirely funded by readers, I'm not beholden to any publisher, sponsor, advertiser, or platform. Seems to be working so far.

Anyway, thanks for following along. I'm glad you're here.

See you tomorrow and here's a hummingbird for your trouble: 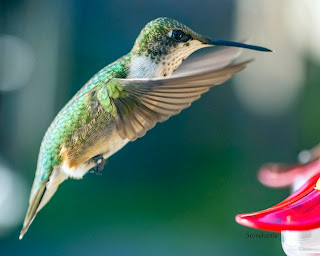