Why, that cheating bitch! 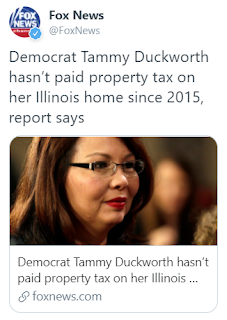 Except disabled veterans are exempted by law from paying property taxes in Illinois.

Yeah, except for that part, you know.

And Fox News actually does know, because they actually spell out that Duckworth is fully 100% entitled to her exemption in the actual article under that inflammatory headline:

In Duckworth’s case, the 53-year-old U.S. senator pays zero in property taxes because she is a disabled U.S. military veteran with a 70% or higher disability rating, as determined by the U.S. Department of Veterans Affairs.

She and other similarly disabled veterans in Cook County who own homes get the tax break regardless of their income level, the Sun-Times reported.

Duckworth lost both of her legs and some use of her right arm after the helicopter she was piloting was hit by a rocket-fired grenade in Iraq in 2004.

The article also mentioned that Duckworth paid more than $16,000 in property taxes on a second home she owns in Virginia -- because even though Virginia offers a tax exemption for disabled vets, it's not her primary home and so she doesn't quality.

So, she didn't pay taxes she wasn't required to pay.

And she did pay taxes that she was required to pay.

Fox News is literally attacking a 100% combat disabled veteran who was severely wounded in the service of her country for not paying taxes that she doesn't owe and for paying taxes where she does. The article literally describes Duckworth's valor and then somehow implies that same Senator, a combat veteran who is a hero in every sense of the word as defined by Fox News and its viewers, as somehow doing something wrong because ... something.

And if you read the comments under the article you'll see that Fox's conservative viewers agree, even if they're not quite sure why they're certain Duckworth is somehow up to no good.

Republicans love Veterans and tax breaks until it's a decorated combat veteran who happens to be a woman of color and a Democrat. 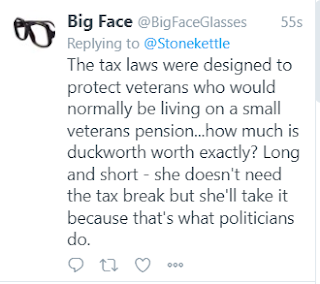 I'm not a politician.

I am however, a disabled veteran.

Why wouldn't I? I earned it.

I mean, what's the logic here? If you make some arbitrary amount money, as determined by random Republicans on Twitter, you're not really a veteran any more? A real combat hero should live in poverty? How much is a pair of legs and an arm worth anyway?

I really enjoy that part where this guy thinks people should just volunteer to pay taxes they don't owe.

Trump, a rich coward who got out of serving his country by faking a crippling injury via a doctor that his daddy paid for, once crowed about how smart he was for not paying taxes and his supporters cheered and enthusiastically agreed -- just as they did when he and his Republican cronies slashed taxes on the wealthy and multitrillion dollar megacorps.

But the very same people are now mad because a combat veteran didn't pay taxes she doesn't owe.

It's not just Fox News: That's Chicago Sun Times yesterday.
Which is, no doubt, where Fox News stole the idea from.

It's funny how the Sun-Times article leads off by attacking disabled vets in general and Duckworth in particular, yet the Senator's property is not some palatial estate but rather a 1600 square foot home worth a modest $250,000 and the others mentioned in the article make vastly more money than she does. Not only that, but the article specially says that property tax exemptions for disabled veterans and senior citizens are a "tiny sliver of the $1.5 billion in all real estate tax exemptions granted to Cook County homeowners this year."

And yet the Chicago Sun Time is pretty sure it's somehow Duckworth and other combat wounded veterans who are the villains here.

This isn't anything new, of course. These same people, all who profess to love the military are who are utterly outraged when a black man kneels during the National Anthem in what they see as the ultimate insult to veterans, were the very same people who mocked John McCain's combat disability and who went after Bob Dole, who attacked Gold Star families because they didn't vote for Trump -- a guy who openly mocked a disabled reporter and called veterans "losers" and "suckers."

Republicans tell you they love and respect the military.

But that's not true.

What they actually love is the idea of an obedient all-powerful unstoppable force they can use to crush their enemies and threaten into subservience those they see as less than worthy.

Most of all, they see the military as a projection of their own manhood and the right arm of their mean bitter religion.

They despise the idea of a military made up of actual people.

They are actively revolted by veterans who might have been damaged in the service of their country, mentally or physically, because to them any disability is weakness and any veteran who is less than a comic book hero in their eyes lessens their manhood and makes mockery of their small miserable selfish god.

And yet, there she is, still serving.