Ladies and Gentlemen, my Congressman. 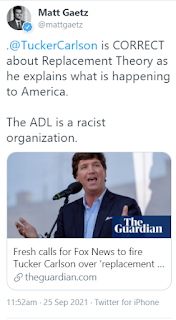 It's certainly no surprise a privileged white Southern Republican who was elected by the wretched dregs of the defeated Confederacy's descendants would openly embrace the Nazi's genocidal racist Replacement Theory.

That part at the end where he literally goes after Jews is the Sieg Heil cherry on top this creamy white vanilla sundae of  white supremacy.

More later, see you then.

Well, well. Look who's trying to walk it back. 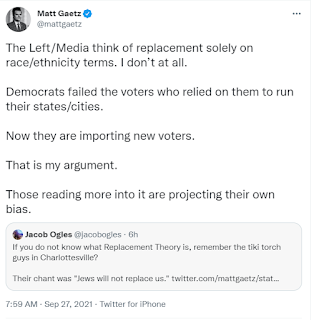 That's what Gaetz said he said.

Importing new voters. What's that mean? Because he specifically said that in response to his first Tweet.

So, let's just look at that first statement again: 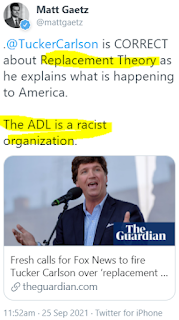 Capitalized. A formal statement. Replacement Theory. I.e. a white nationalist conspiracy theory which clearly and unequivocally worries that certain liberal "elites" are working to replace America's white western European descended population and their associated "western culture" with non-white, non-European, non-conservative peoples, such as Middle-Eastern, African, and especially Latin and South American peoples, perceived to be "socialist" and thus "liberal." The origins of Replacement Theory can be traced directly back to the policies of Nazi German (and, yes, 1930s America) which very clearly targeted Jews, Romany, and other non-Aryan populations.

When Tucker Carlson talks about Replacement Theory, he is very clearly using it in this manner.

He's said so and made no bones about it.

When the Proud Boys shouted "Jews will not replace us" in the streets of Charlottesville, this is exactly what they were talking about.

Matt Gaetz said "Tucker Carlson is CORRECT about Replacement Theory as he explains what is happening in America."

That is what Matt Gaetz said.

"The ADL is a racist organization"

The ADL. The Anti-defamation League.

Gaetz specifically went after Jews in defense of people shouting "Jews will not replace us."

And he did this in the context of a media personality who daily rails against brown-skinned immigrants from the Middle East, Africa, and Latin America.

And he did this while specifically alleging Democrats are "importing new voters" in order to change America.

If those "new voters" were white Christians from English-speaking Western European countries, well, Republicans wouldn't be worried about them changing our culture or voting for liberals, would they?

"The Left/Media think of replacement solely on race/ethnicity terms. I don’t at all."

The only way Gaetz's fears make any sense is if he's saying that Democrats are importing non-white, non-Christian, non-European immigrants to change the face of America and put themselves in power.

His comments, Tucker Carlson's comments, literally make no sense in any other context.

Gaetz, Carlson, Republicans who push Replacement Theory, tell me, what does their base think they mean? When the Proud Boy shouts "Jews will not replace us," what do you think the Proud Boys mean by that? Who do MAGA voters think Gaetz is talking about?

Because I think they're afraid of exactly what they say they are.

"Those reading more into it are projecting their own bias."

I don't mean it in a "racist" or "anti-Semitic" sort of way, it's just totally a coincidence I'm talking about keeping brown people and Jews out of America. I'm not a racist, you're the racist!

The argument of every racist who ever lived.

After Dublin wrote about being set upon at one of Gaetz's rally's, Gaetz made her the subject of his podcast last week and sent a horde of his supporters to harass and bully her.

This is classic Gaetz behavior.

A few years back, Gaetz's supporters hired armed Bikers For Trump to keep women, his own constituents, out of a town hall meeting here in Milton, Florida. No, seriously. Bunch of blubbery goons, unwashed hairy leather boys on their hogs in the parking lot of the local confederate hangout Grover T's Southern BBQ, to make sure liberal women voters didn't get inside and make Matt cry by asking any questions of the guy who's supposed to be representing them in Washington.

But, this time it's a big mistake on Gaetz's part.

Based on Gaetz bowel freezing fear of women and on Tara Dublin's history of stomping holes straight through misogynistic bigots, I'd say this isn't going to turn out how Gaetz hoped.

In fact, Dublin is at this very moment preparing a lawsuit alleging harassment by the Congressman.

Free free to swing by her Twitter feed and lend some support.

You want a better government?

You need to start holding those who you elect to run it to higher standards of behavior.

Here's today's picture of a hummingbird (like Matt Gaetz in his own district, it might be a little hard to find). 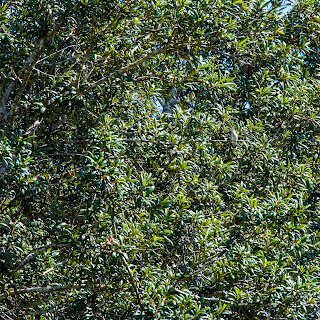