Is it just me?

Am I the only one sick and tired of being held hostage every year?

A bunch of spoiled miserable children pretending to be Senators and Representatives threatening us, threatening America, threatening the world, with ruin and disaster? 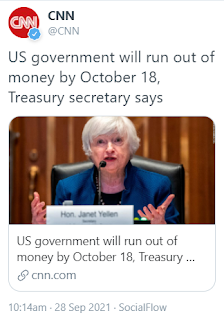 Am I the only one sick of this bullshit?

Any elected official who says they intend to let America default on its financial obligations for some political point is too goddamn irresponsible to be in office. Hell, they ought to be in prison.

If some Taliban Jihadi said they had the means and intent and were prepared to deliberately crash the global economy and bankrupt the United States we'd call that guy a terrorist and send in the drones.

Hell, they write movies starring Bruce Willis about this sort of thing and in those stories, the guy trying to take down the US financial system isn't the goddamn hero. Maybe we need to send Bruce Willis to Washington.

Mitch McConnell is a fucking terrorist.

No, that's not hyperbole. McConnell is literally threatening every single American -- and lot of the world -- with ruin and disaster. That's terrorism by definition.

Indeed, if McConnell and his Republican pals succeed in crashing the US economy again and defaulting on America's loans, people are going to die. These son of a bitches are no different than any America-hating Al Qaida terrorist motivated by miserable politics and hate-filled religion to hurt just as many of us as they can in the name of their fanatical ideology. 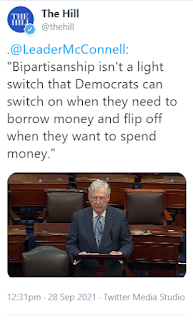 This isn't about "when they need to borrow money."

This is about money already borrowed and about bills that are already due.

This is about money Republicans under Trump have already spent.

Trump told you he was going to build a Wall across border and make Mexico pay for it. Instead, we are the ones who ended up paying for that folly.

Trump told you he "rebuilt" the military. Where did you think all that money for all those new ships and fighter jets and nuclear weapons came from? I mean, we didn't have it, right? Those trillions and trillions of dollars weren't just laying around in a vault somewhere unused. We had to borrow it. Trump borrowed it. Republicans borrowed it. Congress borrowed it.

Trump and Republicans cut taxes on the wealthiest of America, the billionaires and multi-millionaires,. They slashed taxes on massive corporations that rake in billions every year. Trump looked you right in the eye and lied, he told you that profits and income taxes on new jobs would not only pay for it but make it so America would be awash in cash. You know what happened? Predictably those billionaires pocketed the money and those corporations bought back their stock and they all took their profits and stashed them overseas and Trump just fucked us all yet again. And now that bill is due.

I could go on here, down through the budget line by line but why bother?

If we scrapped every bit of Biden's Build Back Better plan and just carried on as Trump left things, we'd STILL HAVE TO RAISE THE DEBT CEILING.

The simple truth of the matter is that this is about money we've already spent. Trillions of dollars that Republicans rubberstamped under Trump, just as they did under both Bush Senior and Junior and under Reagan.

Republicans have no trouble raising the debt ceiling and paying the bills when it's a Republican president buying more guns and missiles and nuclear bombs.

But when it comes to the things that would most directly improve the quality of every American's life and put the country on a path to a decent constantly improving future, things like infrastructure, healthcare, energy, the environment, transportation, technology, education, good jobs and a living wage,  social programs, etc, then suddenly they're all about crashing the economy and holding us all hostage.

When Trump spent all this money, Republicans justified it by saying that's why Americans elected him.

Well, Americans threw him out of office and elected Joe Biden and now Republicans are suddenly saying the will of the people somehow doesn't matter and so they are right now engaged in extortion. Literally extortion. And that's the best thing you can say about it.

Mitch McConnell is no different from any mob enforcer threatening to burn down your house unless you pay up.

They are literally right now threatening the whole world.

Republicans like to tell the world that we don't negotiate with terrorists.

Of course, like most everything else these people say, that's a lie.

Still, maybe it's time to draw a line in the sand. Stop negotiating with these particular terrorists.

Maybe it's time for Joe Biden to take them at their word.

If Republicans won't raise the debt ceiling and Democrats don't have the balls to override that opposition, then maybe it's time for Joe Biden to stop fucking around with these people.

America has to pay its bills.

The global economy is already fragile. If we default on our obligations, we could see another global financial disaster -- and this is where I remind you that we have not yet fully recovered from the last one.

America has to pay its bills.

Now, when you have bills to pay and you don't have enough income or credit, you have to make some cuts.

The president has direct control over certain expenditures -- or rather programs that spend money, which ultimately is the same thing.

Cut it all. No new weapons. And so on. Start at the top and work your way down with the red pen until the DoD expenditures are a quarter what they are now.

Do what can be done via executive action.

Then take that money and pay the goddamn bills.

Mitch McConnell threatens us? Then kill the programs Republicans hold most dear. Gut them. Shut 'em down. And then take that money and pay the bills Republicans ran up.

And don't tell me you can't, because Donald Trump did exactly that when he wanted money to pay for his wall and neither Democrats nor the Mexicans wouldn't give it to him. Republicans are the ones who set this precedent and thought is was a spiffy idea. 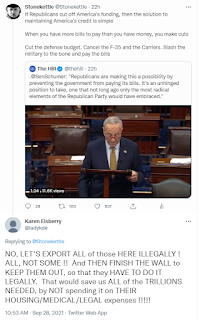