It was a simpler time back then and Gary and Wyatt, a couple of socially awkward outcast dorks, decide to cook up the girl of their dreams in a manner similar to Doctor Frankenstein building his monster instead of gearing up and murdering a school like if the movie was made today.

They program their idea of a perfect woman into a 1985 personal computer (which might be the only really unbelievable part of the movie), hack into a government mainframe (as every teenager in 1985 totally knew how to do), strap bras to their heads (possibly the pinnacle of Michael Anthony Hall's entire acting career), and hook up electrodes to a plastic doll (thankfully instead of raiding the local cemetery for various body parts).

Instead of a lightning storm, their rig is hit by a power surge and then both Kelly LeBrock and hilarity ensues in typical John Hughes movie fashion. Also, there's an appearance by a really young Ironman, just starting his career of playing rich douches.

Now imagine that instead of a doll, they hooked up a corn dog and it came to life. 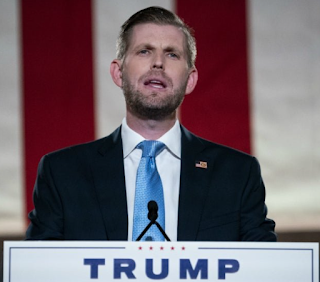 Corndogus Walkus Erectus
The movie even had an older brother who was literally a living pile of shit.
Not to mention a mutant biker Nazi with a disturbing resemblance to Stephen Miller...
But, I digress.
Trump's PAC is sending out text messages to "Trump Patriots."
Not "American" patriots. "Trump Patriots."
Like the worst video game you've ever played. 500% Match Unlocked! Exclusive offer to only true patriots! You're a true patriot, right? Can we count on you to make Trump proud? 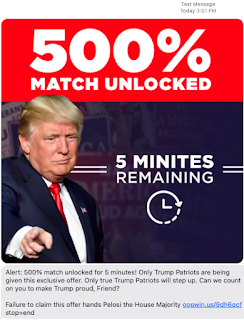 Oh no! If you don't send us money right now, right this "minite," Nancy Pelosi will eat a baby on live TV! There's not even time for spellcheck! You love the babies, right? True patriot that you are! Send us money! Save the babies!
This is literally the entire GOP platform. Right here. Booga booga! Be afraid! Give us money.
That's it, that's the whole thing.
They have no leadership. No solutions. No plan.
Nothing but gibbering fear and naked greed.
It's all a scam and they're not even trying to hide it and why should they? Their base is so damn stupid, so easily manipulated, that they keep throwing down dollar bills like a mark absolutely positive he's figured out the pattern in Three Card Monte and is going to take the street hustler for the entire pot. Double or nothing.
Republican ideology has become nothing but a grift.
Speaking of mutant biker Nazis, everyone's favorite crazy general is this morning explaining how the "Deep State" is going to be putting COVID vaccines in your salad dressing.
I'll just pause for a moment so you can take that in: they're putting vaccines in salad dressing. 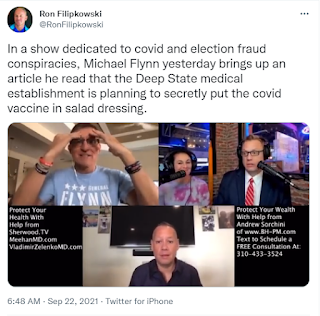 Not really sure why he's upset. I mean, it's not like any of these drooling meatheads eat salad anyway.

Micheal Flynn, disgraced former director of the Defense Intelligence Agency until he was shitcanned by Obama for cause and forced to retire, former National Security Advisor to Donald Trump until he was outed as literally a foreign agent and fired by Trump after 22 days, QAnon, unrepentant insurrectionist, and pardoned criminal who barely managed to avoid prison, I mean, if anyone is an expert on Deep State salad dressing, it's this guy, right? Let's listen to him.

"Somebody sent me a thing this morning where they're talking about putting the vaccine in salad dressing. Have you seen this? I mean it's, uh, and I'm thinking to myself, this is the Bizarro World, right? This is definitely the Bizarro World. These people are seriously thinking about how to impose their will on us in our society and it has to stop."

Somebody sent me a thing...

Yeah, likely it was a puff science piece from UC Riverside News about how some scientists are thinking about how maybe possibly you could maybe get plants to grow selected mRNA vaccines and then everybody would just eat salads and be vaccinated against various diseases.

There might be a few hurdles between the idea and the implementation, however.

It's an interesting idea. Sure. Probably make for some good window dressing in a science fiction story (hell, maybe I'll put it in this goddamn novel David Gerrold and I are supposed to be writing if only I could ever get him the outline I've been promising for a year. Anyway), but the article is on par with the kind of speculative ideas you read about in Popular Mechanics.

I mean, it's a vegan's wet dream and all, but for now you'll still need to go get the flu shot, Farmer Ted.

And it's hardly, "OMG! They're tryin' to vaccinate my salad!"

Which is something Flynn might have had opportunity to say if he hadn't been first pardoned by Trump.

But, again, I digress.

Michael Flynn is a example of a veteran who cannot function outside the ordered structure of the military.

Now, reportedly he wasn't any great shakes as a human being inside the military either, but he was at least functional enough to make it to general before getting fired. Flynn was reasonably functional and competent inside a very specialized community within the military. But outside that, without that correcting structure and oversight and daily interaction with people more sane and grounded, he's come completely unstuck from reality.

I mean, come on, right? Vaccines in salad dressing! OMG! If your wacky grandpa started talking like that, the nurses would strap him to the bed and force feed him nothing but institutional butterscotch pudding.

Mike Flynn has spent the last couple of years with his head inside a plastic bag filled with his own farts and the lack of oxygen is really starting to become apparent.

He's not the only one, of course. VA waiting rooms are full of broken vets like this, who've turned to drugs, booze, and violent insane conspiracy because they simply can not function in civilian society. 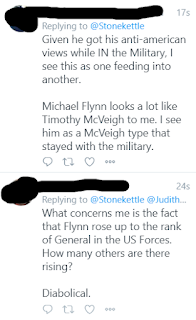 But how could Flynn have made it to General in the first place?

Number of folks in my mentions asking this question.

In war, well, you know, it's about killing people.

It's about killing people before they kill you. When you're not killing people, you're planning and training to kill people. That's war. It sucks. Maybe, as an aside, that's one of the reasons we should think about having less of them. But, again, I digress.

Even in peacetime, the training, discipline, and structure necessary to accomplish that job reliably can lead to a certain nationalist paranoid conservatism. Not always. I mean, I think I survived a lifetime in uniform with my humanity mostly intact, but that's why there's a process for making civilians into soldiers. 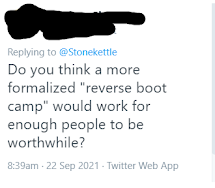 Should there be a better way to reverse the process?

One size doesn't fit all.

Some folks, especially career vets are really lost once they take the uniform off. It took me a while to find something to do that felt as interesting and as important as what I used to be.

For some guys, it never happens.

Outside the structure, conformity, and support of the military community, they are mentally vulnerable.  They're alone for the first time in their lives, nothing to do all day but smell their own farts, surf the internet for confirmation bias, and listen to Fox News.

They don't know how to cope and maintain their own identity, because for these guys they never had an identity outside the military.

Flynn isn't alone, I saw it happen to men I once admired and deeply respected.

But I also remember how former Homeland Security Secretary Janet Napolitano was forced to apologize for a report her department produced suggesting extremist groups may try to attract veterans returning from the wars in Iraq and Afghanistan. That report also said extremists might use economic recession and the election of the nation's first African-American president to recruit veterans.

Napolitano was crucified for that and Obama himself took it on the chin.

But in this post-January 6th America, this land of Donald Trump and Oath Keepers and Proud Boys and Ashli Babbitt and a General who not only daily exhorts his followers to sedition and who thinks Joe Biden is putting vaccines in his salad dressing, well, you know, turns out the Obama Administration was right about those veterans after all.

Anyway, here's how not to take a picture of a hummingbird. 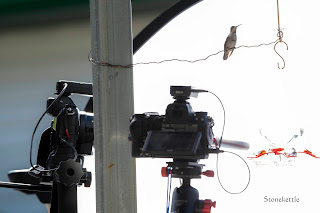