The inaugural crowd here at Trump's reinstatement is yuge. 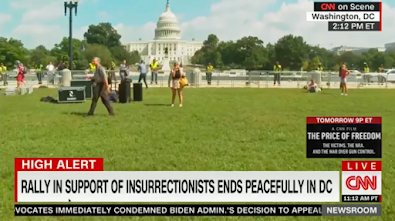 It's the Million MAGA March.

Well, if you use bible math. You know where the earth is only 6000 years old, this could totally be a million people. Totally.

Sure! That's today. The election declared invalid. The insurrectionists vindicated. Trump reinstated. Hillary Clinton dragged off to jail and Mexico sent us a check for the Wall...

I mean, if it's not today, then when?

Look, I don't want to be a pessimist, but I'm starting to seriously doubt if that Pillow Guy knows what he's talking about.

Capitol Police estimated turnout was only 400 to 450 people. And from the pictures I think they're probably being generous.

The Proud Boys didn't show up.

The Oathkeepers didn't show up.

The usual Republican rabble-rousers, Gaetz, Greene, Cawthorn, Giuliani, didn't show up and those vultures never miss an opportunity -- or a free lunch.

Hell, they couldn't ever book Sarah Palin and she ain't got nothing to do these days.

I mean, goddamn, Bristol Palin could have drawn a bigger crowd.

Look at these pathetic dipshits. 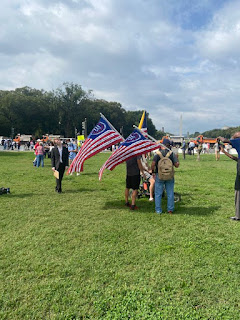 These same racist morons scream about a black man kneeling during the national anthem, but here these same flabby dickless hypocrites are, vandalizing that very same flag.

More like 3% of the normal number of brain cells.

These people literally cannot be kicked when they are down enough.

They're just a bunch of overfed self-important privileged assholes too damn stupid to see they've been used. Same as the dumb violent goons who rally to any authoritarian cause, from the Brown Shirts to the Bolsheviks to the goddamn Confederates.

They couldn't articulate what their own complaints are if you paid them.

All they know is that they're mad. That's right, they're mad. The politicians and the pundits and the news shows told them to be mad and by the Angry White Christian God they are. They've been mad for years now, hell, they can't even remember the last time they weren't mad.

At this point, mad is embedded in their genes and they don't know how to feel anything but rage anymore.

And yet, these people live in the most prosperous nation in the world.

They cannot point to a single grievance outlined in the Declaration of Independence that they must endure.

No, in fact they have so much leisure time and so much extra income they can drive to Washington D.C. in their $50,000 trucks and spend all day on the Washington Mall shouting about how oppressed they are by a government that's trying to give them healthcare, civil rights, good jobs, clean water, clean air, and a decent place to live, all while doing its damnest to keep these unvaccinated dolts from getting a preventable disease on purpose and killing themselves from deliberate stupidity.

Ultimately, these people were rallying for Donald Trump.

And Trump? Well, he fucked over the organizers by telling his supporters not to go...

Which is either hilariously ironic or a testament to MAGA masochism.