Every village has at least one. 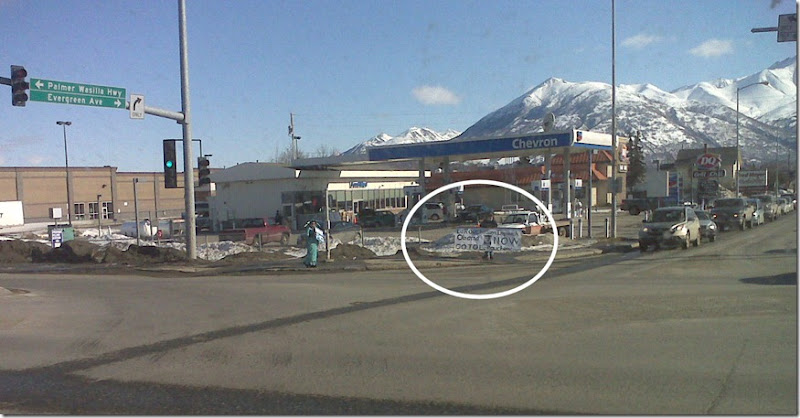 Now, since I took this picture with my Blackberry as I was passing through the light at the intersection of the Palmer Wasilla and the Glenn Highways you probably can’t quite make it out.  Allow me to fill in the details: the guy holding the sign is about 50, he’s wearing a Rocky The Flying Squirrel hat, Mukaluks, and a filthy parka. He’s got a short grey mountain man beard and a very red angry face. The sign he’s been waving at traffic for a week says:

Look, you may not like Barack Obama, but seriously here folks, Lyndon LaRouche? Seriously?  If you’re listening to Lyndon Hermyle LaRouche - the Clown Shoes of Politics, convicted felon, and all around batshit bug eating crazy loon – well, in all seriousness, it’s time to double up on your meds before you hurt yourself.

If nothing else, the Healthcare Reform vote before the House today has certainly brought the fruitcakes out of the woodwork.

Note: Over there to left of the Village Idiot you might notice another odd looking person holding a sign.  That’s the Liberty Tax shill, dressed up as Lady Liberty and waving a sign for the local Tax preparer, she’s a common sight around this time of year. She’s not a LaRouchite, so far as I know.
Posted by Jim Wright at 11:46 AM

Email ThisBlogThis!Share to TwitterShare to FacebookShare to Pinterest
Labels: things about politics, Things that amuse and nauseate me, Things that confound me