Latest From the Shop

I don’t just turn things on the lathe.

I do other stuff in the woodshop too.

Today’s project is a shadow box for a retiring US Air Force Senior NCO: 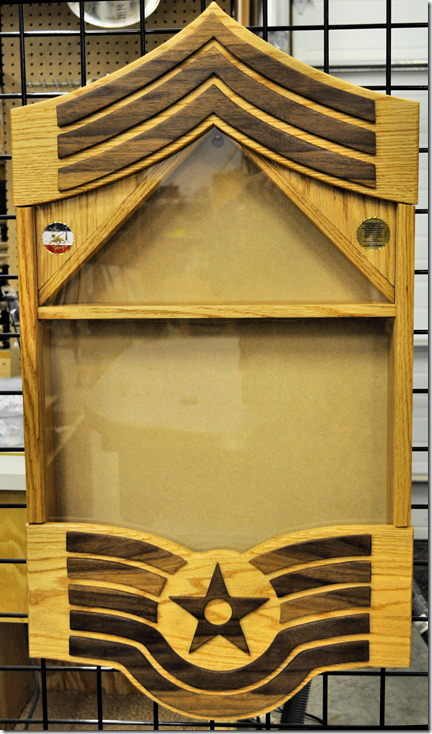 It’s made from American red oak and black walnut.  The box is designed to resemble the NCO’s rank badge, in this case Chief Master Sergeant (in case you’re not up on your Air Force ranks).  The upper section will hold a folded American flag, which is currently being shipped around the world and flown over all the commands the Chief served at in his long and distinguished career. The middle section will be backed with Air Force blue felt and filled with the Chief’s badges, insignia, and decorations by a professional engraver/award shop in Anchorage (I just do the woodwork, the foofoo stuff is somebody else’s job).  Up top, on either side of the flag are two Air Force Challenge Coins which the Chief asked me to embed in the box.

Not that anybody but a seasoned woodworker would notice: the four corner joints are locking tongue joints cut on the radial arm saw and there isn’t a pin or screw in the entire piece, it is entirely glue joints (I know that doesn’t mean much to you non-woodworkers, but pins, nails, or screws are cheating. Your joints should be well made and precise enough that they don’t need such things.  In a quality piece, I mean – you buy from other people, you get what you get. Caveat emptor, baby, caveat emptor).