Here, have a couple of panoramas from my recent trip to Michigan:

The original images the pans were created from were taken in Grand Haven, Michigan. I was walking on the South Pier, which is part of the boat channel where the Grand River empties into Lake Michigan. A pier and lighthouse have been there since the early 1800’s. Ships sailing the Great Lakes could reach as far inland as Grand Rapids, and timber and the products made from it often made their way down this waterway to the Lakes and then to Chicago and the rail roads there or more likely the Atlantic via the St. Lawrence Seaway and from there, well, they went everywhere. Products from Michigan’s glory days of Furniture and Timber can be found all over the globe even today.

The current lighthouse and foghorn building at the pier head were both built in 1905 and are a fixture of the Michigan shoreline. I spent a lot of my childhood and teen years there and have fond memories of the place.

This first pan is from the boardwalk looking North East up the Grand River boat channel. I love the sky in this picture. That big white building on the far side of the channel is the original Grand Haven Coast Guard boathouse, primarily a surf rescue station built nearly a century ago. It’s privately owned now and in need of repair. The new Coast Guard Station is down the channel a mile or so. The Coast Guard has a long and distinguished history on the Great Lakes and there are few Lake sailors who aren’t glad of their vigilance and dedication. Every year Grand Haven hosts the Coast Guard Festival in their honor. There’s a reason why so many Guardsmen come from the Great Lakes.

Grand Haven’s famous beach is to the right, out of frame.

The second pan is from the South Pier itself, just short of the pierhead (the end of the pier farthest into the lake) and the famous foghorn building. The pier juts out from the boardwalk in the previous picture, with the beach off to the right and the Grand River to the left. The iron walkway running down the center of the pier was used by the lightkeepers when the lighthouse and foghorn building were manned. Lake Michigan can be a very violent place during storms – the waves, containing giant chunks of ice during winter before the lake freezes, can and do wash completely over the pier, sometimes in walls of foaming white water ten feet high with hundreds of tons of force behind them. In the winter the pier and its facilities are often coated inches thick in ice and it’s worth your life to walk out there. Dozens have been swept to their death over the years. The walkway once ran all the way to the beach and was used to reach the lighthouse and foghorn building during such storms. The Light and Signal were automated in 1969 and the walkway became superfluous. When I was a kid, the wooden decking was still there, but it has since been removed and the iron framework sealed off from the public. The lighthouse itself is located mid-pier on a large concrete foundation. It is made from cast iron plate held together with large rivets. It was built by the American Bridge Company in 1905 and stands 51-feet tall at the light. The original 6th order glass Fresnel lens was given to the city of Grand Haven when the light was upgrade with a modern plastic lens.

This last picture is of the foghorn building at the head of the pier. The building itself is often mistaken for a lighthouse, this is incorrect. There is a pier head marking light and the red right channel marker, but the cupola on top was an observation deck and housed the original steam powered foghorn. The building itself was built to house the boilers that powered the horn, it is a wooden framed building covered in thick corrugated sheet metal. Fog is a major navigation hazard along the coast of the Great Lakes and signals like this are of vital importance to the lake traffic. In the days before GPS, and even today, the Grand Haven fog horn has guided countless vessels to safety when the the thick gray pea soup of Michigan fog covered the water like a cotton blanket and sailors could barely see the foredeck let alone the beach. Note the concrete breakwater and massive foundation the building sits on. See how the water facing portion rises up like the prow of a ship? It’s designed to break the waves that slam into the end of the pier during storms, breaking the force of the water so that it doesn’t rip the signal building off its foundation and fling it into the channel. The shear size of that battlement should give you an idea of the awesome power of the storms that form on this coast. Note in particular the damaged concrete along the base and the rim, ice does that, waves do that. Trust me, you don’t want to be out where I’m standing to take this picture when those storms hit. 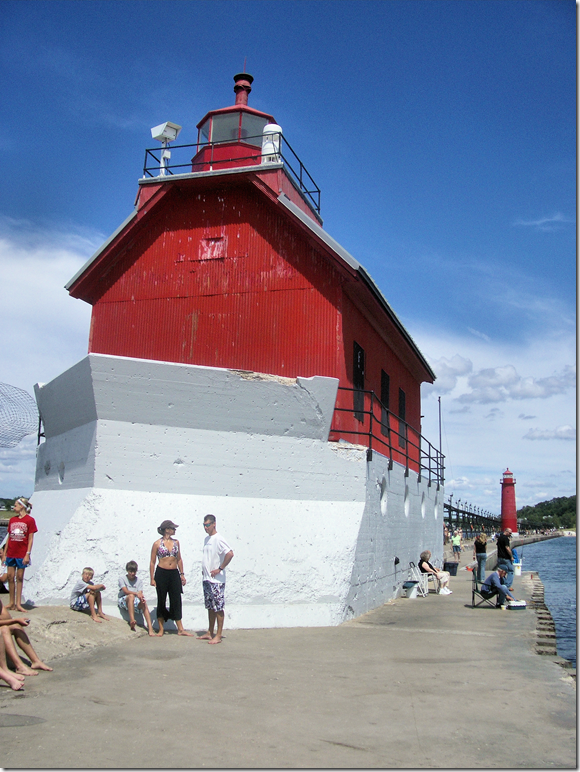 As are all working US marine navigation signals, the Grand Haven Light and Foghorn are the responsibility of the United States Coast Guard.

But not for much longer.

The maintenance and operation of historic Lighthouses and signals are a major drain on the budget and manpower of the Coast Guard and eat up a significant amount of assets that could be better used to protect the public. This year both the lighthouse and the signal building are up for sale under the National Historic Lighthouse Preservation Act. When a buyer is found, the Light will finally go dark and the foghorn will sound for the last time. The pier with its light and signal will pass into private hands to be preserved for future generations. Oh, there will still be a Coast Guard Light and Signal where the Grand River empties into Lake Michigan, but they will be modern automated technology and far easier and cheaper to maintain and operate.

It was good to see the place one last time before it becomes nothing more than a historic landmark.

It saddens me that it should be so. It makes me feel old.

But truthfully, as sad as it is to see this piece of the Great Lakes pass into history, it is for the the best.

I’m hoping that someone, the city of Grand Haven itself, or more likely a historic preservation group, will buy the Light and the Signal Building and turn them into a museum – and finally open them for tours to the public. Because in all the years I’ve been coming here, the one thing I’ve always wanted to do was see the inside of both buildings.

Working signals are national assets and are rarely open to the public, the Coast Guard has never allowed the public inside the Grand Haven Light.

That may be about to change.

Email ThisBlogThis!Share to TwitterShare to FacebookShare to Pinterest
Labels: things about Michigan, things about vacation, things that sadden me