Sins of a Solar Empire

Bad news folks (or good news for some, I guess, depending). 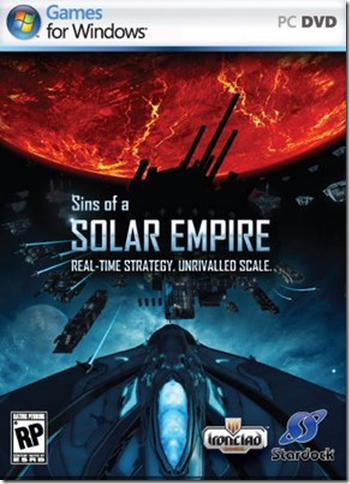 Well, OK – I’ve never been addicted to heroin, so I don’t actually know that Sins of a Solar Empire is actually more addictive, but it wouldn’t surprise me.

I’m not big on computer games.

My son has a Playstation, and we’ve thought about getting him a Wii. I’ve tried to sit down and play with him, but ten minutes of car chases, or motocross, or Lego Star Wars combat – and I’m bored. I can’t help it. It just feels like such a waste of time, and I have no interest in it at all. That and that damned head splitting, car crash music. Gah.

But, Sins, well, Sins of a Solar Empire is something else entirely.

My son gave it to me for Christmas, so I loaded it up last night and fooled around with it. I downloaded the latest updates from the maker, Ironclad. Read a bit of the manual – then started fooling around with it.

And I promptly got my ass handed to me.

Really, you need to do the tutorials – especially if you’re a middle-aged guy like me who is not up on the latest gaming technology.

What I am up on though, is military strategy. Hell, I wrote actual military strategy and executed it in combat. I was a CIC officer, I’m used to military interfaces and computerized battle management software. And I’ll say this – the pentagon needs to start talking to game makers like Ironclad. Because we need interfaces like this. We really, really do.

Sins is a science fiction real-time strategy game. The graphics are fantastic, especially in ultra hi-resolution on my big honking HD monitor. The complexity is unbelievable and there doesn’t appear to be much in the way of limits. So far I’ve only played in a single player mode, but it can be played in multi-player mode through the Ironclad site or over a VPN. I don’t think I’ll ever get that far though, in two days I’ve barely scratched the surface in single player mode – I don’t think I want to go up against somebody who takes this stuff seriously.

This isn’t any kind of review of the game, as I haven’t gotten far enough to actually evaluate it yet. And may not for some time (though I did hold my own against a full dozen pirate attacks this morning).

I just wanted you to know why you won’t be seeing much from me, at least for the weekend.

Well, yeah, that and the fact that I’ve got to go move several tons of snow.

And I’ve got a dozen jobs in the shop.

And there’s some pressing research.

Screw that. If you need me, I’ll be fighting the pirates.

So, what did you get for Christmas? Bet it wasn't your very own interstellar empire.